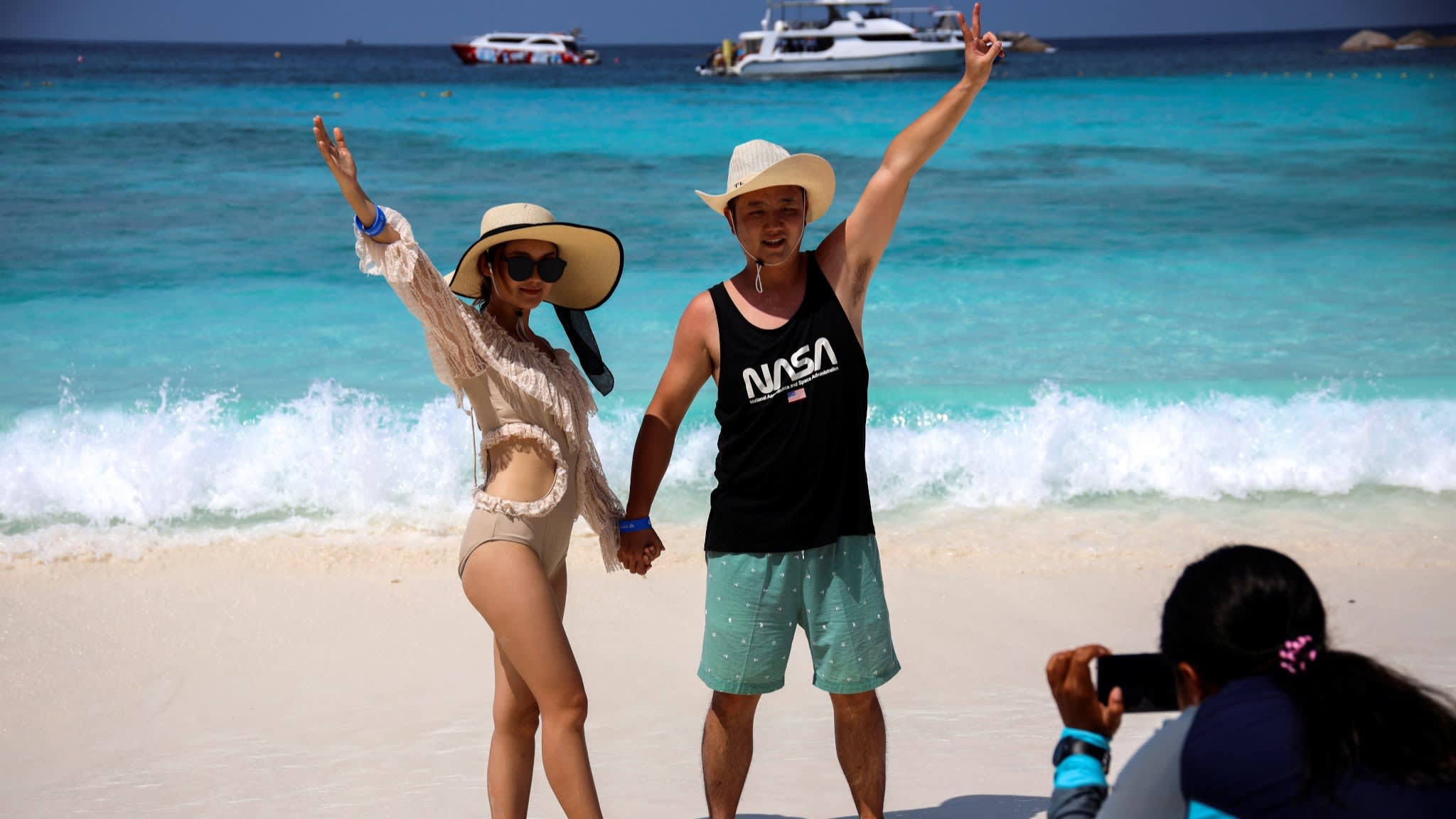 Chinese tourists pose on a beach in Thailand's Phang-Nga province in January, before the coronavirus pandemic upset travel to the Southeast Asian destination. Now, Chinese may be looking for another escape.   © Reuters
JASON TAN, Contributing writerJune 26, 2020 13:01 JST | Thailand
CopyCopied

BANGKOK -- China's initial coronavirus outbreak and the current resurgence in Beijing have driven many Chinese to apply for long-term residency in Thailand as the kingdom enjoys plaudits for its handling of the pandemic.

Thailand Privilege Card, operator of the Thailand Elite Card, has seen a surge in applicants since February, especially in recent weeks, three agents told the Nikkei Asian Review. The card offers a re-entry visa renewable for up to 20 years and other perks for those who can afford it.

"We have received many queries after China saw a potential resurgence of COVID-19 cases" starting in mid-June, said Bobby He, an Elite Card agent based in Bangkok.

The agent said he received seven applications on one day this week.

"It's strange that some people have never even been to Thailand," he said. "The COVID-19 pandemic has spurred many Chinese into looking for a second home overseas."

Thousands of Beijing residents have seen their homes go under lockdown since a locally transmitted infection was found June 12, the first in nearly two months. Within a week, the number of cases surged to 158. Residents of higher-risk areas are not permitted to leave the city, while others must show a negative coronavirus test result to visit other Chinese provinces.

Thailand, by contrast, has reported no local transmissions for 31 consecutive days through Wednesday. The Southeast Asian country has logged just over 3,150 confirmed cases so far.

Elite visa members totaled 9,578 as of Feb. 29, with Chinese making up 20%, an internal document seen by Nikkei shows. British members totaled 6%, while Japanese and Americans made up 5% each. Membership has risen from 6,495 at the end of 2018.

Thailand Privilege Card did not respond to Nikkei's requests for comment. President Somchai Soongswang told the Bangkok Post in April that the company still aimed to sell another 2,500 cards, with 1.5 billion baht ($48.6 million) in revenue, for 2020.

The elite visas, which the government debuted in 2003 to attract high spenders, offer residency in Thailand to members for five to 20 years. Agents said the application threshold is low as long as the individual's passport is not blacklisted by the government.

But the program, in which members pay a one-time upfront fee of 500,000 baht to 2 million baht, is definitely not for everyone. The visa's perks include free limousine pickup at airports, VIP lanes at airport immigration and help from officers to handle the 90-day reporting to authorities, as well as free golfing and spas.

"More and more Chinese are looking for a backup plan after being hit by SARS in 2003 and the Sichuan earthquake in 2008," said Allen Chen, founder of Summer Star Thailand, a real estate agency based in Chiang Mai. "With more information accessible on the internet, they want to explore their immigration options just in case something like COVID-19 hits again in the future." SARS refers to severe acute respiratory syndrome.

Chen, who lives in the northern Thai province with his wife on elite visas, said some Chinese decided to stay in Thailand to ride out the pandemic and approached him for visa consultations. Thailand is letting tourists who overstayed their visas remain in the country until July 31.

The elite visa program was revamped in 2014, after years of losses led to its closure in 2009. At the time, it offered only a single package -- 2 million baht for 20-year visas -- deemed too expensive for many. After the revamp, the cards made a strong comeback.

With schools closed again in Beijing and hundreds of flights canceled, many fear a lockdown similar to the one in Wuhan that began in late January.

That city of 11 million people in central China's Hubei Province was sealed off from the outside world for 76 days amid the height of the outbreak there. Medical resources were strained as authorities built two hospitals in just a matter of days. At least 2,500 have died in the city, according to official figures.

China's early missteps, from being slow to alert the public and suppressing doctors who tried to warn about the virus, sparked doubts for many Chinese over the transparency of the death tolls.

Months later, euphoria rose as Chinese believed their country did a good job in containing the outbreak. Some even called China the safest nation in the world, as the coronavirus continues to wreak havoc outside its borders. But the new wave of infections in Beijing has erased that euphoria.

Somchai has said the elite visa program received many new members since Thailand imposed the emergency decree at the end of March and a ban on inbound flights for all of April. The majority of these new members are U.S., U.K. and Australian tourists stranded in Thailand.

In light of the pandemic, Thailand Privilege Card plans to roll out new membership packages in October that will include coronavirus health checkups to bank on the country's reputation for medical tourism.