SEOUL -- As morning broke, groups of men wearing masks and talking on walkie talkies stood guard along the narrow streets leading to the Sarang Jeil Church, the focal point of a new coronavirus outbreak in South Korea.

Outside the church in a poor neighborhood of northeastern Seoul, blocks of empty buildings slated for redevelopment add to the end-of-days atmosphere. Piles of rubbish and discarded belongings were scattered around.

The Presbyterian church, which says it has more than 4,000 members, is maintaining its own brand of lockdown after coming under criticism for potentially fanning the outbreak by holding an outdoor anti-government rally on Saturday attended by more than 10,000 people.

But hanging over the sidewalks are banners criticizing what the church sees as unfair government interference.

Along one alley leading to the church, beneath a black tarp and in front of an entrance cut off by a barricade topped with barbed wire, a pastor told the Nikkei Asian Review: "This government is unfairly suppressing the church and we're here to prevent that."

The pastor, who refused to provide his name, said church members are simply patriots seeking to protect their country's constitutional order from an overreaching administration.

With more than 600 coronavirus infections tied to the church having been reported in more than 80 locations across the country, Sarang Jeil, founded in 1983, is under fire for defying social distancing guidelines and risking South Korea's battle against COVID-19. 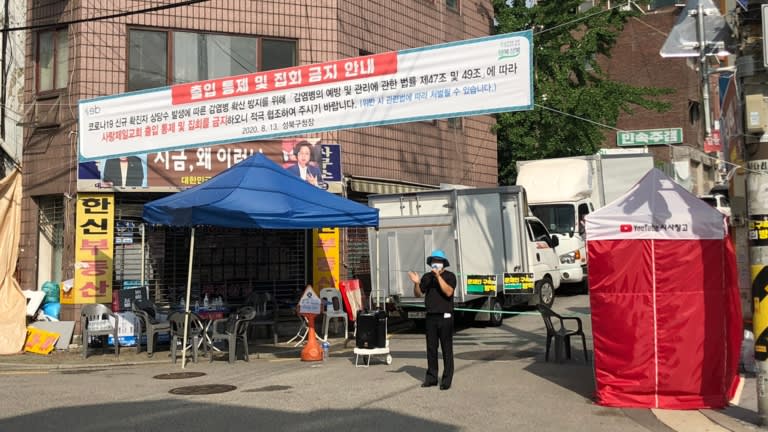 A man speaks into a public address system at a checkpoint leading to the entrance to Sarang Jeil Church in Seoul on Wednesday. (Photo by Steven Borowiec)

On Wednesday, South Korea reported 297 new cases, the highest daily number since March, bringing the country's total caseload to over 16,000. Public health authorities have expressed concern that many of the new cases -- 151 on Wednesday -- are in the densely populated capital.

South Korea had enjoyed a few months of eased restrictions, after the country's daily number of new cases fell to single digits in the spring. But the government this week announced a return to stricter social distancing in Seoul and its environs. Indoor gatherings of more than 50 participants are banned, and outdoor events are capped at 100 people. Churches have been prohibited from holding in-person gatherings and spectators are banned from sporting events.

While experts have commended South Korea's response as exemplary, and the public has generally followed virus prevention guidelines, cluster infections have emerged at defiant churches. The case of Sarang Jeil Church is reminiscent of an outbreak linked to Shincheonji, a minor religious sect based in the southern city of Daegu, South Korea's first major COVID outbreak, in February and March.

The two churches customarily hold large gatherings where participants chant and pray in loud voices. Authorities have accused them both of failing to fully disclose members' identities to enable contact tracing and testing.

The spread of the virus in Daegu was eventually reined in by South Korea's widespread testing and contact tracing. Kwon Jun-wook, deputy director of the Central Disease Control Headquarters, this week described South Korea as being "on a precipice" and that the coronavirus spread tied to Sarang Jeil Church is a "much bigger crisis" than that in Daegu. 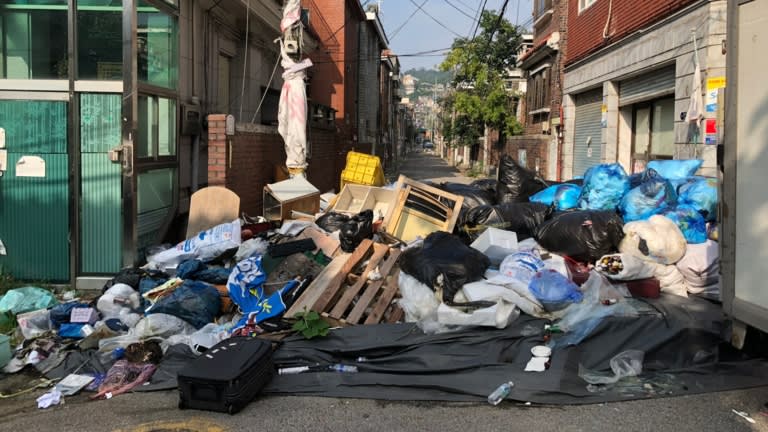 Trash is piled up on the streets around the Sarang Jeil Church in Seoul.. (Photo by Steven Borowiec)

Sarang Jeil Church's main pastor, Jun Gwang-hoon, tested positive for coronavirus this week. Jun has long been a thorn in the side of the Moon administration. For months, he has given sermons in which he lambasted the president, making unsubstantiated claims that Moon is a North Korean spy working covertly to destroy South Korean democracy.

Jun was indicted in March on charges of breaking South Korea's election law. He is currently out on bail.

The current phase of South Korea's virus fight could depend on whether Jun cooperates with the government he decries, or if he encourages members to resist.

Tark Ji-il, a professor of theology at Busan Presbyterian University, argues that Jun's motivation is maintaining his own power as head of the church

"Jun has charisma and the church members feel compelled to obey him. He wants to maintain close control over the church so he creates a sense of crisis and of victimhood," Tark said, adding that church members will be unlikely to cooperate with the government if Jun instructs them not to.

The worsening virus situation comes at a time of political turmoil for Moon. His approval rate has been tumbling, mostly due to public discontent with government measures aimed at stemming the rise of real estate prices and plans to create more housing in the greater Seoul area.

The results of a RealMeter poll released Monday showed Moon's approval rating fell last week to 43.3%, down significantly from 59.1% in early June. The same poll also showed 36.5% of respondents identifying as supporters of the conservative opposition, more than 33.4% who said they support Moon's Democratic Party.

Moon's single five-year term as president runs until 2022 and his party currently holds a strong majority in the legislature. Keeping a lid on the spread of the virus will be essential for Moon to ensure that a member of his party succeeds him.

Before Moon needs to worry about the virus' effects on his political fortunes, the businesses near Sarang Jeil Church are taking no chances.

Streets in the area were nearly empty even during morning rush hour. A barbecue restaurant across the street was closed with a sign in the window informing customers that operations were on hold due to the recent outbreak.

The sign wished customers good health, adding, "With all our power, we can beat the coronavirus."