Nikkei Asia is tracking the spread of the coronavirus that was first detected in the central Chinese city of Wuhan.

Cumulative global cases have reached 454,909,041, according to Johns Hopkins University in Baltimore. The worldwide death toll has hit 6,035,208.

For more information about the spread of COVID-19 and vaccination progress around the world, please see our interactive charts and maps.

-- Status of vaccinations around the world

9:01 p.m. China will allow the use of rapid antigen test kits as the country grapples with a new outbreak, the National Health Commission says. The news triggered a stock rally for the test makers Friday.

The rapid tests, used widely worldwide, have been restricted in China as the country maintains its "zero-COVID" strategy through countless rounds of mass PCR testing. But China logged more than 1,000 local cases Friday, and many residential compounds in different cities have been under lockdown for days.

1:08 p.m. The Philippines has approved the emergency use of Paxlovid, Pfizer's COVID-19 drug, the country's food and drug agency says. It is the third COVID-19 drug approved by the agency for emergency use, after Roche's antibody cocktail and Merck's treatment pill. Paxlovid can be used to treat adult patients who do not require supplemental oxygen and who are at increased risk of severe infection, the agency said.

12:55 p.m. Mainland China reports over 1,000 new local infections on Friday, the highest daily count since Beijing contained its first national outbreak in early 2020, driven by a jump in asymptomatic infections amid the spread of the omicron variant. The size of the latest outbreak is much smaller than many others outside mainland China, but the increase in the number of cases could add pressure to China's "dynamic-clearance" ambition to curb each transmission as quickly as possible.

12:38 p.m. Chinese Premier Li Keqiang said the central government is deeply concerned for Hong Kong as the city battles with the latest COVID outbreak that has seen hundreds of people die and that the central government is paying close attention to the situation every day. During a news conference to end the annual "two sessions" in Beijing, Li also urged the Hong Kong government to "unite and lead people from all walks of life" to improve people's livelihoods and enhance the city's status as an international finance, trade and shipping center. 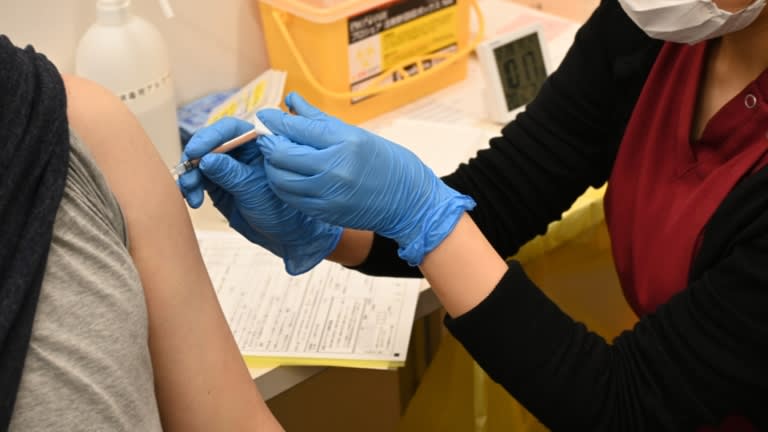 12:00 p.m. Japan's government is considering offering a publicly-funded fourth coronavirus vaccine shot, with the Ministry of Health, Labor and Welfare set to discuss the issue at a meeting in March. The extra shot could start being administered this summer and would likely be offered to people six months after their third dose.

9:35 a.m. Japan's household spending rose a real 6.9% in January from a year earlier, in response to the previous year's steep fall in expenditures due to a coronavirus state of emergency, government data released on Friday shows. Average spending by households with two or more people was 287,801 yen ($2,480), the Ministry of Internal Affairs and Communications says. Japanese consumers spent more in January compared to last year, when household spending fell due to a coronavirus state of emergency.   © Kyodo

3:20 p.m. Thai industrial sentiment dropped in February for the first time in six months, dented by a spike in COVID-19 infections, surging oil prices and the impact of Russia's invasion of Ukraine, an industries group said on Thursday, Reuters reports.

12:50 p.m. Hong Kong leader Carrie Lam says now is not the time to lift a ban on flights from nine countries including the U.S. and the U.K., with plans to reopen the city after the government controls a deepening coronavirus outbreak, Reuters reports.

10:00 a.m. Japan's wholesale prices jumped 9.3% in February from a year earlier, the fastest pace of increase on record and a sign that inflationary pressures were building even before the Ukraine crisis triggered a surge in fuel and commodity costs 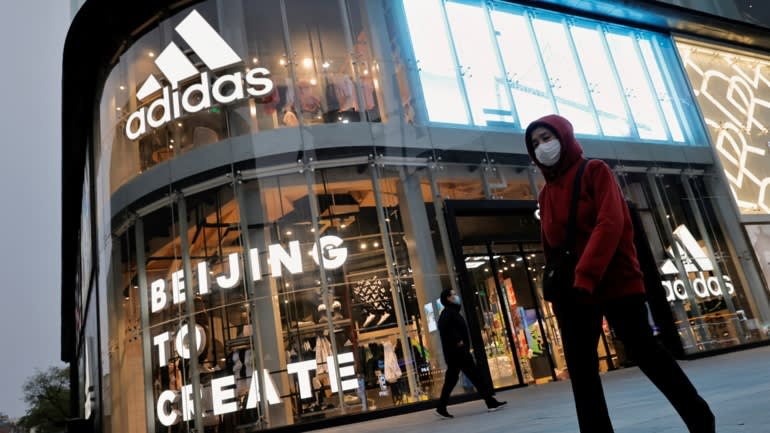 People walk past a store in a Beijing shopping district following an outbreak of COVID-19 in April.   © Reuters

5:30 p.m. China's Shanghai reports 62 domestically transmitted asymptomatic COVID-19 infections for Tuesday, the seventh consecutive day of increases in such cases, official data shows. The financial hub is moving quickly to halt the spread of the virus, either delaying or cancelling dozens of concerts and exhibitions, and shutting some public venues. The city also reported three local cases with confirmed symptoms, which China counts separately from those without.

4:16 p.m. Hong Kong flagship carrier Cathay Pacific Airways says its net loss for 2021 reached nearly $800 million as it warns that its operations will remain largely grounded amid the city's worst COVID-19 outbreak yet.

1:19 p.m. Hong Kong leader Carrie Lam says citywide compulsory COVID-19 testing is no longer a priority, but will continue as the government studies outcomes. After two weeks of not addressing the public, Lam says she will hold a daily briefing to keep the public informed on efforts to curb the current outbreak. All residents in nursing care facilities will be vaccinated by March 18 to eventually create a 'closed-loop' bubble for residential care homes. A voter wearing a plastic glove casts a ballot for the presidential election at a polling station in Seoul on March 9.   © AP

9:33 a.m. Japan's strong economic growth in the final quarter of 2021 has been downgraded in a revised estimate, as pressures from record COVID-19 infections and rising energy costs heighten risks of a contraction this quarter. The revised data shows Japan expanded at an annualized 4.6% in October-December, lower than the preliminary reading of 5.4% released last month.

10:28 p.m. With daily COVID-19 cases declining sharply, India declares that regular international flights will resume March 27. Scheduled international flights have been suspended in India since March 2020 owing to the pandemic, but New Delhi has bilateral air bubble arrangements with over 30 nations under which commercial passenger services are being operated. 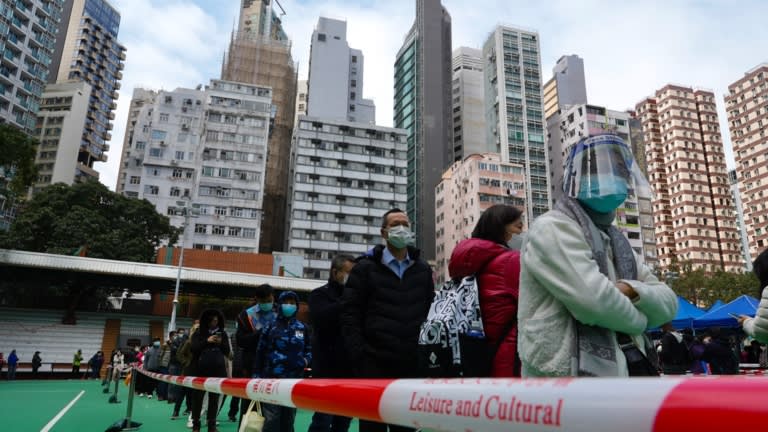 Hong Kong’s compulsory COVID-19 testing could be postponed to April, according to local media.   © AP

6:24 p.m. Hong Kong's compulsory COVID-19 testing could be postponed to April, local media reports, as the city records 28,475 new cases. Health experts have said testing at the peak of the infection wave is not effective and have recommended testing be conducted as infection eases.

The University of Hong Kong says in its latest forecast that the fifth wave peaked on March 4. More than 4.3 million people are expected to have caught coronavirus and roughly 5,000 deaths recorded by the end of the latest outbreak, it says.

10:15 a.m. Japan posted a current-account deficit of 1.18 trillion yen ($10.31 billion) in January as a jump in imported oil costs offsets gains in investment incomes, government data shows. The figure was the largest current-account deficit since the start of 2014 for the country, which faces continuing uncertainty due to the Ukraine crisis and the COVID-19 pandemic. 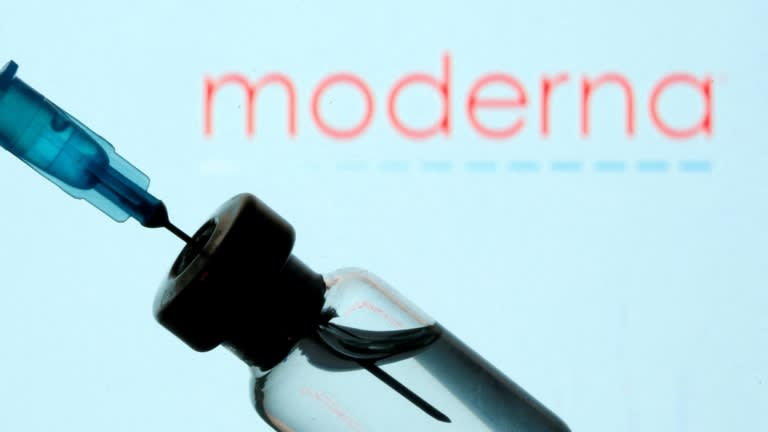 Moderna plans to develop and begin testing vaccines targeting 15 of the world's most worrisome pathogens by 2025.   © Reuters

9:30 a.m. Moderna says it plans to develop and begin testing vaccines targeting 15 of the world's most worrisome pathogens by 2025 and also will permanently waive its COVID-19 vaccine patents for shots intended for certain low- and middle-income countries. The U.S. biotechnology company also says it will make its messenger RNA technology available to researchers working on new vaccines for emerging and neglected diseases through a program called mRNA Access.

In total, the CDC urges Americans to avoid travel to more than 130 countries and territories.

10:30 p.m. The worldwide death toll from COVID-19 surpasses 6 million, according to data from Johns Hopkins University in Baltimore.

6:00 p.m. Hong Kong reports 25,150 new coronavirus infections and 280 deaths as authorities struggle to contain a ballooning COVID-19 outbreak that has torn through hundreds of nursing homes and hit many of the city's unvaccinated elderly. On Sunday, Hong Kong authorities said residents should not worry about a looming mass testing program, with details to be announced. Hong Kong reported the most deaths globally per million people in the week to March 6, according to data publication Our World in Data.

2:20 p.m. China stocks fall as global equity markets slump, commodity prices surge, Russia's war on Ukraine rages and COVID-19 rears up again in the country. The CSI300 index was down 2.4%, to 4,389.39, by the end of the morning session. The Shanghai Composite Index lost 1.5%, to 3,396.73 and the Hang Seng Index dropped 3.4%, to 21,159.18. The Chinese port city of Qingdao reported 88 new coronavirus cases for March 5, the highest number of locally transmitted cases in one day so far this year for China. The number of seriously ill patients in South Korea is expected to grow as the country eases up on social distancing. A makeshift coronavirus testing site in Seoul.   © AP

12:30 a.m. South Korea reports 210,716 new cases for Sunday, down from 266,849 the previous day but still up 50% from a week earlier, according to Yonhap news. The number of seriously ill patients rose by 70 to 955 as new infections are expected to grow further amid the recent move to ease social distancing.

10:20 a.m. Japan's Nikkei stock index falls over 800 points, or 3%, in early morning trade as investors fear the U.S. and European bans on Russian oil products could further push up oil prices and damage the global economy, which is still recuperating from the pandemic.

9:40 a.m. Japan reports 53,969 new infections, down 20% from a week earlier. The government has decided to extend its COVID-19 quasi-state of emergency covering 18 prefectures, including Tokyo and Osaka, until March 21 and to lift it in 13 prefectures. 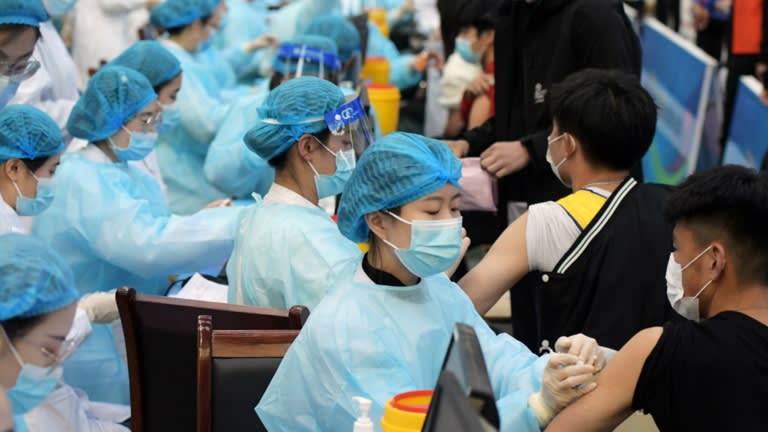 6:32 p.m. The Chinese port city of Qingdao reported 88 new coronavirus cases for March 5, all of them of the omicron variant. The tally represents China's highest number of daily locally transmitted cases so far this year. China recorded 329 new cases on the mainland on Saturday, 175 of them locally transmitted, the National Health Commission (NHC) said, compared with 102 local cases a day earlier. The Qingdao outbreak was mainly among middle school students in Laixi County, the Qingdao Municipal Health Commission said.

11:45 p.m. Spain removes quarantine requirements for people who have come in contact with others who have tested positive for COVID-19, regardless of vaccination status. Close contacts are now instructed to use caution and act responsibly.

6:40 p.m. Indonesia is considering a quarantine waiver for foreign visitors to Bali from next week, officials say, while neighbor Malaysia announces the removal of curbs on travelers from Thailand and Cambodia. Malaysia will allow vaccinated arrivals from Cambodia and Thailand to skip quarantine from March 15. Several daily flights fly from Kuala Lumpur to Phnom Penh, Bangkok and the island of Phuket.