Coronavirus: What we know about symptoms and treatments so far

The disease presents like ordinary flu, but secondary infection is a deadly risk The new coronavirus as seen under a microscope:  Researchers are working to understand the nature of the disease and its symptoms. (Photo courtesy of Japan's National Institute of Infectious Diseases)
TAKURO KUSASHIO and RIMI INOMATA, Nikkei staff writersFebruary 7, 2020 17:55 JST | China
CopyCopied

TOKYO -- While the spread of a new coronavirus that originated in Wuhan, the capital of China's Hubei Province, shows no sign of stopping, a partial picture of the mysterious infection has emerged.

Experts in Japan, the U.S., China and elsewhere have begun to get a handle on the symptoms of the disease and potential treatments. The symptoms of the new coronavirus are relatively mild compared with other viruses, such as severe acute respiratory syndrome, or SARS. They are similar to those of a cold or influenza, experts say.

The Japanese Association for Infectious Diseases announced the therapeutic process and results for three symptomatic patients infected with the coronavirus who were treated at the National Center for Global Health and Medicine in Tokyo.

One of the three patients, a Chinese national residing in China's Hunan Province, showed symptoms including a cough, fever and chills. An X-ray and computed tomography, or CT, scan detected a shadow in the patient's lungs and the patient was diagnosed with pneumonia caused by the coronavirus.

The patient temporarily had symptoms, such as slight breathing difficulties, and was given an HIV drug. After that, the patient did not have problems such as a worsening respiratory condition. The patient's body temperature fell to 37 C on the fifth day of hospitalization and the patient no longer needed oxygen to breathe.

The other two patients are Japanese nationals who had stayed in Wuhan. One of the two continued to have a slight fever but recovered without developing pneumonia, while the other did not have symptoms, such as breathing difficulties, despite being diagnosed with pneumonia.

The Japanese Association for Infectious Diseases said that none of the three patients was in serious condition.

According to the U.S. Centers for Disease Control and Prevention, the main symptoms of pneumonia caused by the new coronavirus are fever, cough and shortness of breath. It has been reported that the first patient in the U.S. diagnosed with the coronavirus also developed pneumonia after developing a cough and fever. Those symptoms improved after 12 days.

"The first symptoms of the new coronavirus are similar to those of influenza," said Hideki Hasegawa, director of the National Institute of Infectious Diseases' (NIID) Influenza Virus Research Center. "It is hard to tell the difference between the new coronavirus and influenza or a cold. Few patients seem to have a runny nose or sore throat. They are more likely to have a fever and cough," said Kazunori Tomono, a professor at Osaka University specializing in infectious disease.

There have been many cases of the coronavirus reported overseas. Doctors at Wuhan Jinyintan Hospital issued a report on the virus that was published in the medical journal Lancet in late January. Of the 99 confirmed cases between Jan. 1 and Jan. 20 monitored through Jan. 25, nearly 80% of patients had a fever and cough, 31 had shortness of breath and 11 had muscle pain. Two had diarrhea.

"It seems that coronavirus patients develop pneumonia and respiratory symptoms at a relatively early stage," said Hasegawa of the National Institute of Infectious Diseases. Diarrhea, which is common in SARS and Middle East Respiratory Syndrome, or MERS, is "rare at this point," he added. 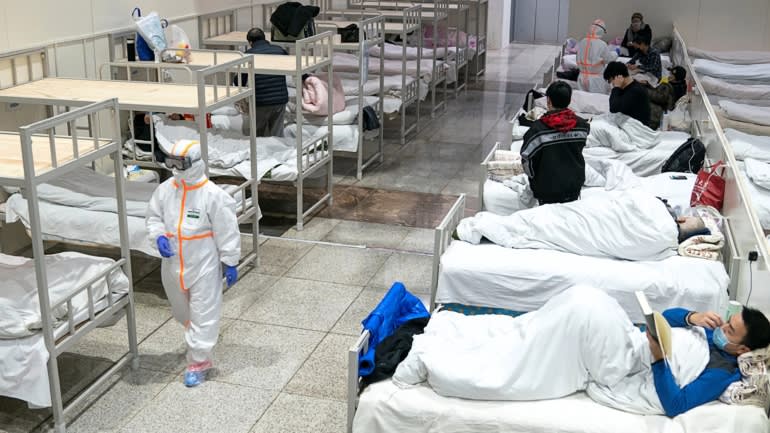 Medical workers in protective suits attend patients at the Wuhan International Conference and Exhibition Center, which has been converted into a makeshift hospital in Wuhan, China on Feb. 5.   © Reuters

In late January, researchers at the Pasteur Institute in Ho Chi Minh City and others reported in the New England Journal of Medicine that a 65-year-old patient who traveled from Wuhan to Vietnam had contracted the new coronavirus. The patient developed pneumonia, but recovered after receiving supplemental oxygen and other treatments. He had heart problems and other chronic diseases.

"Those undergoing cancer treatment, [or who have] other diseases may become severely [ill]," said Erisa Sugawara, a professor at Tokyo Healthcare University. The patient in Vietnam and some cases in Wuhan meet these criteria. Complicating chronic conditions in some patients include diabetes and high blood pressure.

At this point, however, no common characteristics have been reported in severe cases. "It is still unclear what sort of people may develop pneumonia and become severe" cases, said Minato Nakazawa, a professor of public health at Kobe University.

"It seems that severe patients are not necessarily the elderly or those who have preexisting diseases," said Mitsuyoshi Urashima, a professor at Jikei University School of Medicine in Tokyo. Urashima speculates that air pollution and insufficient medical systems are contributing factors.

"There is no direct means of defeating the new coronavirus," said Motoi Suzuki, head of the NIID's Infectious Disease Surveillance Center. Treatments are stopgaps aimed at easing fever or cough. After that, recovery depends on the body's natural recuperative powers, he said.

But if people's immune systems are weakened as a result of the coronavirus infection, their pneumonia may grow severe due to secondary infection. In such cases, "Treatment using antibiotics to limit damage to the lungs, such as is used for ordinary pneumonia, is effective," Suzuki said.

Overseas, more testing of antiviral treatments is underway. According to a research paper by Wuhan Jinyintan Hospital, antibiotics were administered to most of the hospital's 99 coronavirus patients. In addition, 75 patients received antiviral drugs, such as the anti-flu agent oseltamivir phosphate (Tamiflu) or ritonavir, an anti-HIV agent.

While 31 patients have been discharged from the hospital, 11 others have died. The paper stressed the need for prompt diagnosis of patients with severe infections, and timely treatment. It may be too soon to assess the effectiveness of drugs used to treat the coronavirus.

It is also possible that the virus will mutate and become more easily transmitted, including by people who show no signs of infection. "The virus may become more virulent," Nakazawa said, "but if it becomes more infective, it will become less virulent."