Communities reeling from lack of Chinese visitors race to protect themselves Vietnamese porters carry goods from China in the border city of Mong Cai in 2018. The coronavirus crisis is reverberating in this and other border towns.   © Reuters
TOMOYA ONISHI and YUICHI NITTA, Nikkei staff writersJanuary 29, 2020 13:23 JST | Vietnam
CopyCopied

HANOI/YANGON -- Truong Phan cannot tear himself away from news of the coronavirus outbreak for long. "I keep checking the situation every hour," said the owner of a small trading company in Vietnam's northern city of Mong Cai, on the border with China.

Truong's family abandoned their plans to cross the border for the Lunar New Year holidays, known as Tet in Vietnam, at the last minute. Instead, they opted for the rolling hills of the Vietnamese province of Son La, reasoning that few Chinese visitors go there this time of year.

But Truong has much graver concerns. "The Vietnam side will close the border from today," he said on Tuesday, citing notices from local authorities. He said he could handle a one-week disruption, but if it is closed for a month his company will go bankrupt.

Truong is not alone in fearing for the health of his family and his business. Anxiety over the new virus and its economic consequences is emanating far from the epicenter in Wuhan to communities along China's over 22,000 km of borders.

In Vietnam, which has two confirmed virus cases in Ho Chi Minh City as of Wednesday morning, and in Myanmar, which has none, tourism and other businesses are beginning to suffer. Besides restrictions imposed by authorities on both sides, rumors and confusion are driving people away from border towns.

Truong said many of his neighbors are leaving Mong Cai, noting there is talk of patients on the Chinese side in Dongxing. Dozens of cases have been reported in the Guangxi Zhuang Autonomous Region, where Dongxing is located.

Mong Cai is the busiest of Vietnam's three main crossings on its 1,065 km inland border with China. The other two are Huu Nghi and Lao Cai. There are also about 30 smaller crossing points, many of which are ill-equipped to step up screenings. 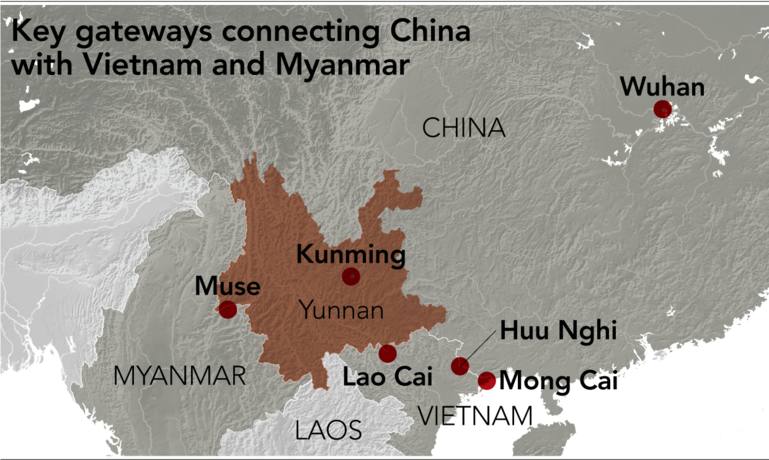 A border official at Lao Cai, which neighbors China's Yunnan Province, said permissions for Chinese tourists to cross were suspended effective on Monday.

China has become a vital source of tourists to Vietnam year-round. In 2019, visitors from the mainland surged 16.9% to 5.8 million, out of a total of 18 million international arrivals. The Lunar New Year period is especially lucrative, though. In Lao Cai, in the past few years, an estimated 50% of visitors over Tet were Chinese.

This year, even in the days before the suspension, the border official said traffic had declined dramatically.

Tourism businesses in Sapa -- a town near the Lao Cai crossing known for terraced fields and picturesque hiking routes -- are bracing for "bad impacts," said To Ba Hieu, vice chairman of the local tourism association.

At the Huu Nghi crossing -- where North Korean leader Kim Jong Un entered Vietnam last year for his ill-fated Hanoi summit with U.S. President Donald Trump -- a Vietnamese official said Chinese travel agencies had issued notices saying China would close its side of the border last Sunday. The notices were apparently sent despite no official announcement from China.

Back at Mong Cai, in Quang Ninh Province, only 3,379 Chinese visitors crossed on the first and second days of the New Year -- last Saturday and Sunday. That number was down 38% from the same period of 2019.

Quang Ninh as a whole saw just 6,700 Chinese tourists arrive by road, air and sea on the first three days, which are normally the busiest. Last year, the province welcomed 45,000 Chinese visitors over the holiday period. People cross the border between Lao Cai, Vietnam, and Hekou, in China's Yunnan Province, in 2016. (Photo by Hiroshi Kotani)

Myanmar faces its own challenges as it scrambles to stay coronavirus-free despite its more than 2,000 km, often porous border with China.

Less than two weeks ago, Chinese President Xi Jinping was in Myanmar, pushing an economic corridor project. On Jan. 20, the same day he said the coronavirus outbreak "must be taken seriously," Xi stopped in the Yunnan Province city of Kunming, at the Chinese edge of the envisioned corridor, and encouraged greater connectivity between the countries.

Now, even the fruit and vegetable trade is stalled.

"Fruit and vegetable traders and farmers should not send their goods to Muse," a border town in the eastern state of Shan, said Sai Myint Bo, the director of the local commodity exchange.

Due to travel restrictions in China, "there are few Chinese buyers in the market," he told the Nikkei Asian Review. "A large number of trucks carrying fruit products of Myanmar are lined up here."

Muse is the largest land gateway for agricultural products between the countries and a key point on China's Belt and Road. But what the town needs now are more face masks for concerned residents. Health officials are also introducing digital thermography to prevent intrusions across the border river.

Myanmar's state newspaper reported on Tuesday that crossings to China, meanwhile, have declined significantly since there was confirmation of virus cases in Yunnan.

The Southeast Asian country's ethnic strife only complicates the containment effort. The border with Yunnan is dotted with minority-controlled areas beyond the reach of the central government. Many of these communities rely on China for infrastructure, such as electricity and mobile telecommunications networks, and use the yuan as their main currency.

Some of these enclaves are doing what they can to keep the virus at bay.

The United Wa State Army, one of Myanmar's largest ethnic armed groups, has ordered nightclubs and casinos to close, the Myanmar Times newspaper reported on Monday.

A spokeswoman for the insurgents said they would conduct stricter checks of arrivals from China "to prevent the entry of the coronavirus." The spokeswoman added, "So far, we have not found anyone who might be infected with the virus in our territory."

Other militant-controlled areas are adopting a similar defensive stance, according to local reports.

As these border communities race against time, the broader regional impact of the coronavirus crisis is only just beginning to crystallize. China's economic rise and its citizens' zeal for travel have made it an indispensable driving force for other major economies.

An Oxford Economics report issued on Sunday named Vietnam as just one of five at-risk markets that rely heavily on tourism, and Chinese tourists in particular. The others: Hong Kong, Thailand, Singapore and the Philippines.