Coronavirus imperils Duterte's plan to cash in on China

Prolonged outbreak hits tourism; could knock 0.7% off the country's GDP MANILA -- Every February, travel agents in the Philippines are busy arranging Chinese visitors' itineraries and locals' upcoming summer trips, but this year has been different.

"They are still busy -- busy doing cancellations and refunds," said Ritchie Tuano, president of the Philippine Travel Agencies Association, which has over 600 members. "This virus has severely affected the industry."

The new coronavirus, which was first discovered in the central Chinese city of Wuhan, has claimed more than 1,000 lives and infected over 40,000 people worldwide. To fight its spread, many governments, including China's, have restricted travel by Chinese, who have propelled Asia's tourism industry in recent years.

But for the Philippines, the outbreak has shaken an economic pillar that President Rodrigo Duterte and his Chinese counterpart, Xi Jinping, have worked hard to build.

After winning the presidency in mid-2016, Duterte set aside a contentious maritime dispute with Beijing and declared a break from the U.S., Manila's longtime ally and China's rival. On Tuesday, Duterte's government formally told the U.S. that it will terminate a pact that facilitates routine joint military exercises between the two allies.

In return, Xi has vowed to boost the Philippine economy, partly by lifting a de facto ban on travel by Chinese to the country and importing more tropical fruits.

The Philippines for years watched enviously as neighbors such as Thailand and Vietnam became Chinese tourist magnets. It took a diplomatic overture from Duterte to turn the Philippines into one. 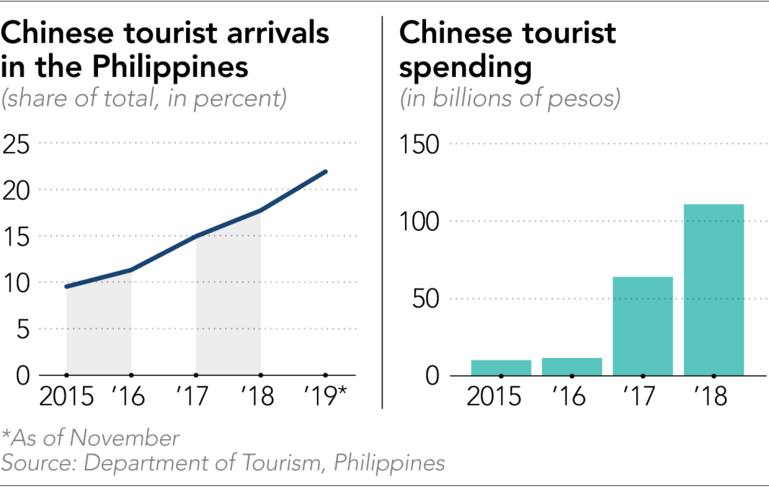 In 2015, the Philippines drew 490,800 Chinese visitors, who spent 10.19 billion pesos ($200 million) in the country. Three years later, Chinese arrivals surged to 1.26 million and they pumped 110.79 billion pesos into the economy, representing a quarter of all foreign tourist receipts, according to data from the Philippine Department of Tourism. From January through November last year, 1.63 million Chinese visited the country.

The Philippines' annual revenue from Chinese tourists is comparable to a month's worth of overseas remittances or revenue from call centers -- sectors that have powered the Southeast Asian nation's economy.

Manila aims to set tourism records year after year to generate jobs, but that goal will be hard to achieve without the Chinese, who are the second-largest source of arrivals, after South Korea.

The tourism industry stands to lose 42.9 billion pesos in revenue from February to April due to the coronavirus, Tourism Secretary Bernadette Romulo-Puyat told a congressional hearing on Wednesday. Socioeconomic Planning Secretary Ernesto Pernia said a prolonged outbreak could knock 0.7% off the country's gross domestic product, putting the government's 6.5% to 7.5% growth target at risk.

"There is no denying that this is indeed a crisis," the Philippine Travel Agencies Association's Tuano told the Nikkei Asian Review.

The pain is probably sharpest on the island of Boracay, with its famous white sand beach. A top destination for Chinese, 30% to 40% of the hotels and restaurants there have partnered with Chinese investors to help them cash in on the demand, according to Peter Tay, a board member with the Tourism Congress of the Philippines. 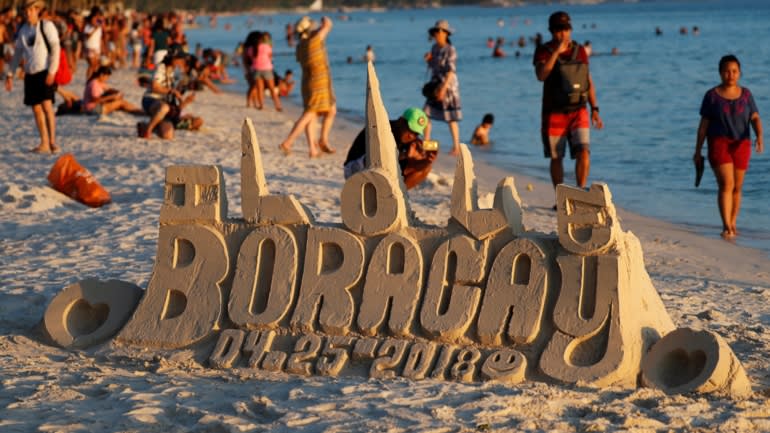 A sand sculpture is seen along the beach of Boracay island in the Philippines April 2018.   © Reuters

"With this ban on Chinese, many hotels' and resorts' and restaurants' operations will be closed temporarily," Tay said.

After initially hesitating to impose a travel ban that might offend Beijing, Duterte came under intense public pressure to do so after the Philippines confirmed its first case of the virus on Jan. 30. Adhering to the "One China" policy, Duterte's ban covered Hong Kong and Macao and Taiwan, despite protests from Taipei. Local airlines, which have added flights to China recently, were forced to temporary halt them and brace for losses.

In the face of the crisis, Duterte has stood in solidarity with Beijing and urged the public "to stop this xenophobia thing," as anti-Chinese sentiment swelled following the outbreak. "We have many Filipinos in China. Even if we [had] none, we are a community of nations, we cooperate," Duterte said. "China has been kind to us; we can only show the same."

Apart from tourism, there are signs that the fallout from the coronavirus could spill over to trade.

In 2018, China surpassed Japan for the first time in decades as the top importer of Philippine bananas, thanks partly to Duterte's diplomatic pivot. But banana growers in the southern Philippines, Duterte's home region, have reported cancellations of Chinese orders following the outbreak, according to Stephen Antig, executive director of the Pilipino Banana Growers & Exporters Association. He said farmers could be losing $5 million a week in suspended shipments.

"[Chinese] customers were probably hesitant to go out, hence the supermarkets halted orders," Antig told Nikkei. "If this continues, our industry will suffer."

Antig said the situation is reminiscent of the 2012 standoff between Chinese and Philippine naval forces near Scarborough Shoal, which led to import sanctions by Beijing. "But this time, the problem is not man made," Antig said.

At a Senate hearing on Tuesday, tourism industry representatives were told to diversify their markets and focus on local tourism until the coronavirus problem is resolved. "Maybe this is a wake-up call for the industry not to rely too much on a single market," said Sen. Nancy Binay, who chaired the inquiry.

Meanwhile, Trade Secretary Ramon Lopez is confident that the impact on trade will be minimal, and that Manila's top trading partner will recover. "I believe they can easily bounce back," Lopez said.