Medical staffers transport a patient with a highly suspected case of the new coronavirus at the Queen Elizabeth Hospital in Hong Kong on Jan. 22. A spike in deaths in mainland China reported Jan. 25.   © Reuters

TOKYO/NEW YORK -- China's outbreak of the new coronavirus has claimed more lives and has traveled further, reaching the shores of Europe and Australia for the first time.

Fifteen new deaths were confirmed on Friday in the epicenter of Wuhan, according to an update by the Health Commission of Hubei Province, where the city is located.

China's Health Ministry placed the death toll at 25 as of Thursday. Hubei's Friday tally, plus another death reported by the Health Commission of Heilongjiang, a province in northeast China, brought the total number of deadly cases to 41, indicating a sharp rise. Confirmed cases in China also rose to 1,287.

Australia on Saturday confirmed its first case of the virus. A Chinese man in his 50s, who had been in Wuhan and flew in from Guangzhou last Sunday, was in "stable" condition at a hospital in Melbourne.

Earlier, on Friday, France confirmed its first two cases of the virus, with one patient hospitalized in Bordeaux and the other in Paris.

Health Minister Agnes Buzyn told a news conference that the Bordeaux patient, a 48-year-old man of Chinese origin, had recently visited China's Wuhan, the epicenter of the outbreak. Buzyn said she had no information yet on the Paris case. These are the first two confirmed cases in Europe, and more cases are likely in France, she said.

Meanwhile, the U.S. on Friday confirmed a second case, where a woman in her 60s living in Chicago was diagnosed after a stay in Wuhan. The Centers for Disease Control and Prevention said as many as 63 potential cases are being investigated as the illness continues to spread around the globe. 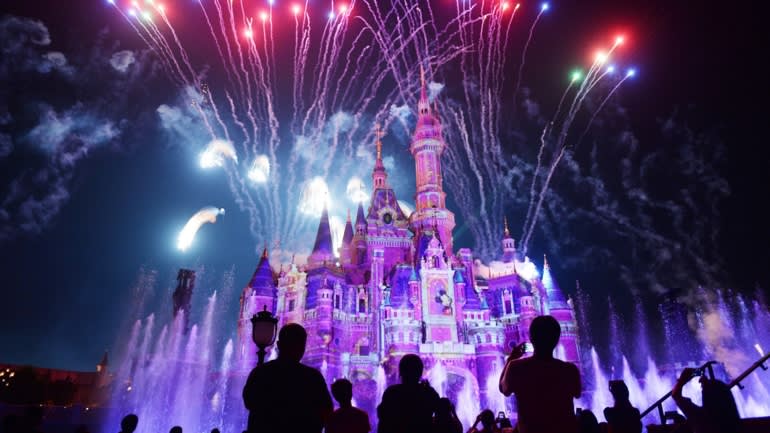 Shanghai Disney Resort decided to close temporarily to "to ensure the health and safety of our guests and Cast," it said on its website.    © Reuters

The outbreak is wreaking havoc with the seven-day Lunar New Year period, one of China's busiest travel seasons.

The Shanghai Disney Resort on Friday announced that it will close temporarily in an effort to curb the spread of the new coronavirus. The theme park, which welcomes nearly 12 million visitors annually, will remain closed indefinitely starting Saturday.

"We will continue to carefully monitor the situation and be in close contact with the local government," said a notice on Shanghai Disneyland's website, without specifying a reopening date.

The park's operator said refunds will be issued to guests who had purchased tickets or made other reservations at its hotel and resort or for its productions.

According to a document reviewed by Nikkei, the Chinese Ministry of Culture and Tourism on Friday ordered travel agencies to suspend all bookings of new group and package tours, as well as exercise caution over existing ones.

Chinese travel booking platform Trip.com Group on Friday announced on its official Weibo account that it will guarantee full refunds for all domestic bookings.

At least seven Chinese movies that were scheduled to be released for the Lunar New Year holiday -- typically a golden opportunity for the box office -- have been pulled. They had been heavily promoted ahead of the holidays but would have faced potentially empty cinemas as people have begun to avoid large gatherings and amid cinema shutdowns in some regions.

The central government has closed popular tourist attractions such as the Forbidden City and Lama Temple, and canceled large Lunar New Year gatherings.

A quarantine has been imposed on Wuhan, the capital of Hubei Province, in central China, where the virus originated. Illegally traded wildlife at an animal market in Wuhan is believed to be the source of the strain.

City officials in Wuhan have canceled outgoing flights and closed public transportation, moves that have been followed by 14 neighboring cities, the state-run Hubei Daily reported.

The virus has spread outside mainland China. Thailand has four cases and Singapore three. South Korea, Japan, Hong Kong and the U.S. have each reported two cases. Taiwan has reported one case. There are also confirmed cases in Macao.

Vietnam announced on Thursday that two Chinese travelers were diagnosed with the virus. Taiwan has banned travelers from Wuhan.

In a Chinese New Year message, Singapore Prime Minister Lee Hsien Loong on Friday said the virus "so far does not appear to be as deadly as SARS." The three cases in Singapore confirmed by the Health Ministry are a 53-year-old Chinese female, a 37-year-old Chinese male and his father, all from Wuhan.

The ministry said the 53-year-old woman arrived in Singapore on Tuesday and visited popular tourist destinations such as Marina Bay Sands and the Orchard shopping street.

The World Health Organization stopped short of calling the outbreak an international public health emergency. "Make no mistake, though, this is an emergency in China," WHO chief Tedros Adhanom Ghebreyesus said.

Despite the spread of the coronavirus, U.S. President Donald Trump sounded an optimistic note with a tweet predicting that everything will be resolved in the end.

"China has been working very hard to contain the Coronavirus," Trump wrote. "The United States greatly appreciates their efforts and transparency. It will all work out well."

"I want to thank President Xi!" he added.