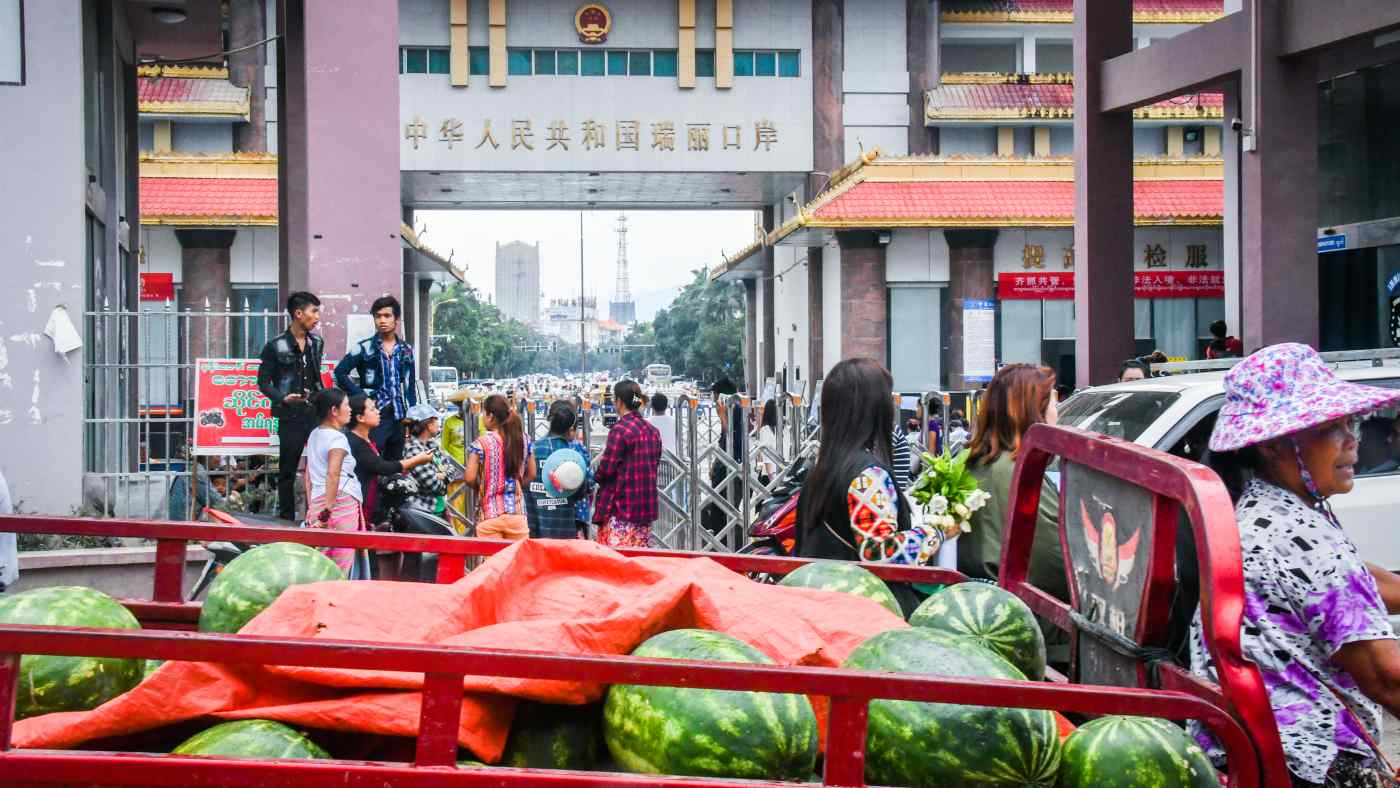 Watermelons in front of Myanmar's border with China in Muse in 2018: For the immediate future, farmers will have to find other markets for their produce as borders with China remain closed.
YUCHI NITTA and APORNRATH PHOONPHONGPHIPHAT, Nikkei staff writersFebruary 6, 2020 18:36 JST | Myanmar, Cambodia, Laos
CopyCopied

YANGON/BANGKOK -- Farmers across Southeast Asia are struggling to sell their crops to their biggest customer as the coronavirus shuts down vital border trade with China.

Exporters from Myanmar, Vietnam and Thailand are faced with the choice of flooding domestic markets with their produce, or seeing it rot at closed border crossings.

"The coronavirus has undoubtedly hurt business," said Maung Phyu, a 48-year-old farmer north of Yangon, in an interview with the Nikkei Asian Review. "There aren't many things the [Myanmar] government can do for us in this situation."

Over the last decade, China has greatly increased imports of produce from its neighbors, making local farmers reliant on the Chinese market.

China is a key market for Southeast Asian agricultural exports. Thailand and Vietnam, for example, export about a fourth of their agricultural output to China, while Myanmar sends more than half, according to ASEANStats. For fruits and vegetables, China siphons nearly half the exports from these countries.

Now, many rural economies risk losing their most important trading partner due to the epidemic. Three years ago, Maung Phyu contracted with several Chinese traders to supply watermelons and muskmelons. Almost every day during the harvest season, he would send truckloads of fruit to Muse, a border town in China's southernmost Yunnan Province. He sent 70 shipments in December followed by 120 in January.

But now all shipments have stopped, and even transporting goods to the border is discouraged. "We were told not to send our produce to the border, as there was nobody to buy it," said Maung Phyu.

Fishery products like crabs and eels are also being held up, said a commerce ministry official in Muse.

The situation has forced Maung Phyu to sell at domestic markets in Yangon, where watermelons go for only 3,000 kyat to 5,000 kyat ($2.00 to $3.50) each, compared with 10,000 kyat on the export market. Muskmelons also only fetch 50% to 70%. "Many farmers haven't harvested their crops, and when they do they'll have nowhere to bring them," he said. Watermelons not exported to China are expected to flood Myanmar's domestic market in the coming weeks. (Photo by Yuichi Nitta)

As of Wednesday, the World Health Organization has confirmed 24,554 cases of novel coronavirus around the world, of which 122 are in Yunnan Province, bordering Myanmar, Laos and Vietnam.

Durian farms in Thailand have also been hit just as the harvest season is set to begin. Production is forecast at 956,000 tons this year -- up about 27% from 2019 -- on the back of growing demand from Chinese traders and tourists.

Helping drive China's newfound appetite for the fruit has been Jack Ma, founder of e-commerce giant Alibaba Group Holding. In April 2018, Ma said he would start selling durian online. He then stunned Thai officials by selling 80,000 durians in just one minute on his shopping site.

But instead of cashing in on increased Chinese sales this year, growers face disaster. Nearly one million tons of durian is expected to flood the market from late February, with few buyers in sight. "We can't do anything except pray for an end to the outbreak," said Jira Payungporn, a durian trader in Chantaburi Province, home to Thailand's premium durian.

He said the lockdowns in Chinese cities have disrupted logistics while tighter border inspections have lengthened wait times, causing fruit to spoil before it gets to market. "Chinese have been ordered to stay home, and that means no shoppers," said Jira. "And if they manage to go out, they only buy necessities, not durian." Thai farmers have increased their production of durians due to their popularity in China's e-commerce market. (Photo by Takaki Kashiwabara)

He said prices are expected to fall sharply this year, angering farmers, who will likely call for government support. "Prices could fall to 50 baht ($1.60) per kilogram, down from 180 baht during last year's boom," Paiboon said.

The official said more than 300 container trucks are waiting at the Lang Son border crossing, including 190 containers of dragon fruit.

Vietnam produced more than one million tons of the fruit in 2018, most of which came from provinces in the south. The fruit accounted for a third of all fruit exports in 2018, and was valued at over $1 billion. According to local grower's association, about 90% of it goes to China.

Similar to Myanmar, authorities in Vietnam have ordered growers to search for other export markets or sell domestically. This is easier said than done, but seems to be the only advice governments in the region can give in light of the severity of the coronavirus outbreak.