TOKYO -- An outbreak of pneumonia caused by a previously unknown coronavirus is raging through China, revealing not only the authorities' failure to take prompt action to contain the epidemic but the huge social distortions masked by the country's rapid economic development.

Coronavirus fears are spreading across the world as millions of Chinese travel abroad during the Lunar New Year holiday.

"We have promptly taken a series of necessary measures, in collaboration with the relevant departments and local governments, since the occurrence of coronavirus pneumonia," Premier Li Keqiang said at a meeting of the State Council, China's top decision-making body, on Jan. 20.

Li may have been reluctant to admit that the government's response to the pneumonia outbreak has been tardy. His statement rang hollow in light of the panic that has spread in tandem with the illness.

Food prices have soared in Wuhan, the central Chinese city at the epicenter of the coronavirus infection. With municipal authorities suspending public transport in an effort to halt the spread of the virus, the internet in China is lit up with comments such as: "Chinese cabbage prices have soared," and, "Almost nothing is left on vegetable shelves in supermarkets." The comments often come with photographic "evidence."

The phrase "exorbitant vegetable prices" appears repeatedly. A number of supermarkets in Wuhan have responded with statements stressing "all-out efforts to maintain the supply of vegetables," and pledges to "guarantee the stability of prices during the Lunar New Year holiday." They say they are trying to determine where the photos of bare shelves came from. The statements are a sign of a desperate desire to tamp down popular discontent amid fears of infection and a virtual quarantine of the city, on top of worries about rising prices.

Outside Wuhan, things are looking even more grave as people are barred from entering the city -- and reports surface that people from Wuhan are not welcome elsewhere. 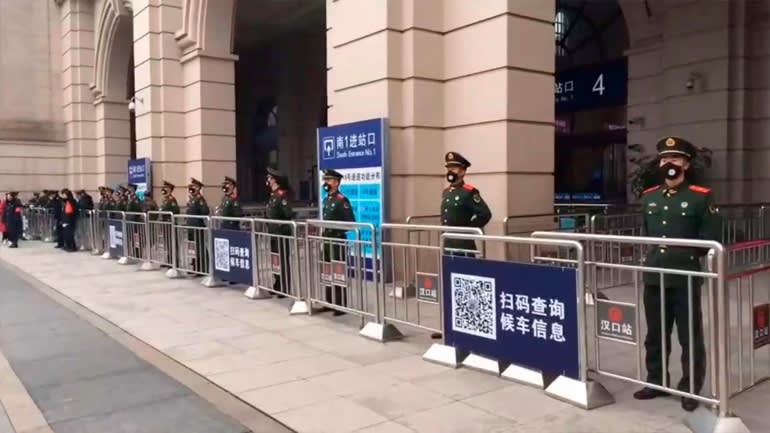 "People intuitively fear the unknown. Over the past few days, unreasonable moves to ostracize Wuhanese people are occurring in some places," Mayor Zhou Xianwang said at a news conference on Sunday, calling on people to remain calm. Zhou was speaking out in defense of people who have already left Wuhan for the New Year or for other reasons.

But the effects of the coronavirus outbreak are not limited to the city. A shadow looms over the festive period due to rumors of some places refusing entry to cars from Hubei Province, where Wuhan is located, gas stations refusing to fuel cars with Wuhan license plates and hotels refusing to accommodate guests from Hubei.

A major concern among Chinese, regardless of where they live, are rumors that used surgical masks may be resold. One photo doing the rounds online shows discarded masks gathered in a cardboard box. One idea suggested to prevent the sale of dirty masks is to cut them with scissors before throwing them away.

Behind the online unrest is a social structure that remains fragile despite China's economy growing to triple the size of Japan's. "In China, the focus has been on innovation -- for example, in IT and artificial intelligence -- but there is still a gap between the degree of economic development and the degree of social development," according to Xiao Minjie, managing partner at AIS Capital, who advises on mergers and acquisitions.

The expert on the Chinese economy says the growing drive to isolate Wuhan residents is evidence of "social conflict that will cause more damage than the disease itself."

The epidemic has revealed an underdeveloped health care system and the unsanitary living conditions of some Chinese. However much the government calls for eliminating inequalities of wealth, they still exist, fueling ordinary people's discontent over rising prices.

The scare over the possibility of illegal sales of discarded masks only took hold because there are people in China who buy dirt-cheap products. China has achieved technological innovations that rival those of the U.S., but the country has not necessarily prioritized efforts to create the type of society that an economy the size of China's demands.