From Japan to Thailand to India, here's how authorities are fending off hoarders

TOKYO -- Consumers in Asia and across the globe are in panic mode, to varying degrees, over the new coronavirus.

Face masks, nonperishable foods and toilet paper have been selling out despite government calls to remain calm. Videos circulating on social media show long lines, empty shelves and even physical fights over supplies. But policymakers and companies, and some tycoons and activists, are taking action to soothe public fears.

We asked our reporters around the region to look into the buying frenzy and what is being done to stop it. The takeaway, in many cases, is that fear is as much or more of a problem than actual shortages.

Mask hunt: Every morning, Japanese consumers line up outside supermarkets and pharmacies. They then proceed to strip the shelves bare of face masks and toilet paper.

Rumors on social media that the country depends on toilet paper imported from China sparked the panic, even though Prime Minister Shinzo Abe himself came out and said that "almost all the toilet paper consumed in Japan is manufactured in this country."

Japan has also had serious problems with unscrupulous businesses and individuals reselling masks for exorbitant prices on the internet.

The government hopes a combination of increased production and stiff penalties will soon end the turmoil.

Abe is pushing to double the supply of masks nationwide to 600 million starting this month, in part by offering subsidies to manufacturers. The shortage has also brought newcomers into the business, with electronics maker Sharp announcing that it will start making surgical masks this month with a daily capacity of 150,000.

A new rule by the Ministry of Economy, Trade and Industry to prevent profiteering from the shortage will take effect on March 15. The rule will make reselling face masks for profit a crime punishable by one year in prison or a 1 million yen ($9,800) fine. Reselling masks at the same price or lower, however, will still be allowed. Price controls on other products such as disinfectants and diapers may be added to the rule later if necessary.

Mask rationing: One of the countries hit hardest by the coronavirus has seen little panic buying of groceries, but a lack of masks forced the government to take action.

On Monday, President Moon Jae-in's administration introduced an emergency distribution system, selling two masks per person a week through pharmacies, agricultural cooperatives and post offices. This followed a move last week to ban mask exports, as shoppers were lining up for hours to buy them by the handful.

Shoppers are now permitted to buy masks just once in five days.

First mover: Taiwan was the first in the world to suspend exports of surgical masks, way back on Jan. 24, as the coronavirus outbreak exploded in China. The announcement, however, triggered a buying spree, prompting some Taiwanese travelers to stock up on masks while visiting Japan over the Lunar New Year holidays.

The government in Taipei took charge of the situation by ordering all surgical mask suppliers to hand over their output to the authorities, who would then distribute masks to drugstores across the island. Local mask production capacity has more than doubled to 10 million per day as of Monday, from 4 million in January.

The government also introduced a mask rationing system: Adults with public health cards can buy three at a time per week, while children with health cards are eligible for four. Taiwan's government ordered all surgical mask manufacturers to hand over their output for the authorities to distribute.   © Reuters

Tycoons and activists step up: Since the Lunar New Year in late January, surgical masks, hand sanitizers and other disinfectants have been sought-after items. But it was panic buying of toilet paper that gained the most traction, arguably setting the tone for similar stampedes around the world.

In early February, Hong Kong consumers snapped up toilet rolls due to fears that mainland producers would stop supplying the city. The government quickly dismissed the rumors and assured the public that supplies were stable, to little effect. ParknShop, one of the largest supermarket chains in the city, said it had to double toilet roll deliveries to meet demand.

The rush lasted about three weeks. But it turned out that residents only have so much space for toilet paper: Once people had accumulated enough for, likely, a few months, the frenzy stopped in late February.

Now the shelves are stacked with toilet rolls. Supplies of masks and other medical products are still running low, however.

Tycoons, politicians, celebrities and pro-democracy campaigners have stepped in to help.

Billionaire Li Ka-shing personally escorted a delivery of more than 5,000 sets of protective clothing on his private jet from New Zealand, and donated 250,000 masks.

Prominent activist Joshua Wong's Demosisto group procured 1.3 million masks in February from the U.S. and Central America. Some were put on sale at cost on his organization's official store, while others were given away to those in need.

"There are plenty of masks": Panic buying is gradually fading away in China, the epicenter of the outbreak, as companies ramp up production.

Zhang Zheming, a 35-year-old interior designer in Chongqing, told the Nikkei Asian Review that he rushed to buy roughly 200 face masks in late January due to fears of supply shortages. "But now, I don't have to stockpile masks anymore," Zhang said. "I can easily order them at drugstores or get them elsewhere. There are plenty of masks."

Companies ranging from carmaker BYD to Taiwan-based smartphone assembler Foxconn have moved to produce masks in China. Sinopec, a Chinese oil and gas giant, turned its gas stations into a network for mask distribution, selling 30,000 masks each day at 50 locations in Beijing.

Crackdown in progress: Indonesian police are raiding sites where hoarders are suspected of storing surgical masks. At least a dozen arrests have been made so far, including workers in a north Jakarta factory who were allegedly making substandard masks.

"I have ordered the National Police chief to take firm actions against irresponsible people who take advantage of times like now by hoarding masks -- especially masks -- and selling them at highly inflated prices," President Joko Widodo said on March 3.

The previous day, the country had announced its first two confirmed coronavirus patients. This sent consumers rushing to pharmacies and convenience stores, straining already depleted stocks while driving up prices.

Masks and sanitizers are still difficult to find in greater Jakarta, and it remains to be seen whether the police crackdown will help. "Fear can do more harm": Although Singapore has received high praise for its containment of the outbreak, it has not been immune to panic buying.

Consumers stocked up on groceries and daily essentials after the authorities raised the country's threat level from yellow to orange on Feb. 7. Government leaders, including Trade and Industry Minister Chan Chun Sing, called for calm. But official assurances that the city-state had a stockpile of masks did not prevent snaking lines at shops and pharmacies.

Singaporean Prime Minister Lee Hsien Loong scheduled a broadcast in response, stressing that there was no danger of food running out. "Fear can do more harm than the virus itself," he said. "It can make us panic, or do things which make matters worse, like circulating rumors online, hoarding face masks or food, or blaming particular groups for the outbreak."

Hoarding has eased since, suggesting the public got the message.

4:00 a.m. lineups: Several private hospitals have voiced concern about panic buying leading to shortages of face masks. The government has stepped in, banning exports of masks to safeguard domestic supplies. Moreover, all masks made by 11 producers in Thailand must be sent to a government distribution center at the Ministry of Commerce.

Nevertheless, masks remain hard to find at shops and supermarkets. For those in urgent need, the only option is to line up at the ministry's distribution center at around 4:00 a.m. for a chance to purchase a maximum of four masks.

Relief may be on the way, however. Dhanin Chearavanont, Thailand's richest man and the senior chairman of top Thai conglomerate Charoen Pokphand Group, said he will invest roughly 100 million baht ($3.19 million) to produce around 3 million masks per month. His factory is expected to be ready within five weeks.

Uneasy in Hanoi: Vietnam saw a rush of buying in late January after Prime Minister Nguyen Xuan Phuc said the country "must prepare to fight against the spreading Wuhan virus" and that "all Vietnamese might have to wear masks to prevent the disease."

Many retailers hiked prices, prompting complaints. The health authority quickly placed face masks and sanitizers on a "stable price" list, warning that violators could be fined or lose their retail licenses.

The country's market watchdog, meanwhile, asked provincial authorities to look out for hoarding of masks, medical gloves and other sanitary products.

Yet, after an emergency meeting in Hanoi last Friday where the country's 17th coronavirus case was announced, another round of panic buying ensued. The infected individual was reported to have had contact with numerous others in the capital, prompting a rush to supermarkets due to fears of a quarantine.

The authorities have stressed that enough food will be provided and have urged calm. 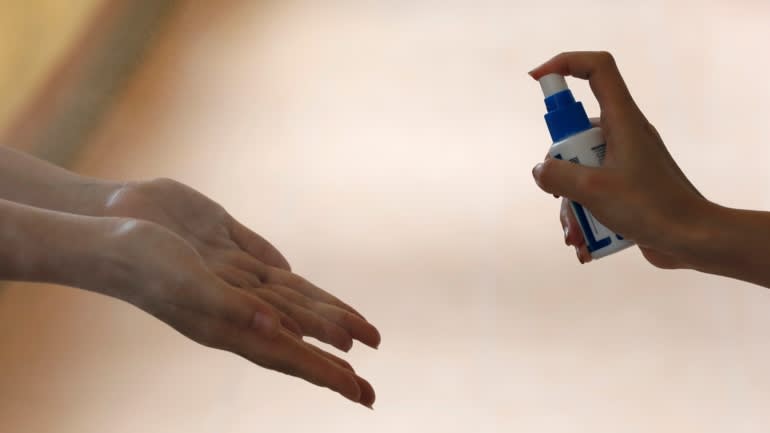 Students at the Hanoi National University of Education clean their hands: Sanitizers are among the products that have been selling out across the region.   © Reuters

Export squeeze: A drugstore owner in southern New Delhi said he quickly ran out of the usual supplies in early March, after the country reported a surge in coronavirus cases. "There has been a sudden rush of customers seeking masks and sanitizers," he said. "Instead of a single unit they have been buying four or five units of each of these articles."

He said he would allow customers to make reservations for incoming supplies.

Last Thursday, Indian Health Minister Harsh Vardhan told parliament that the government was restricting exports of "critical items," including N95 face masks. He also noted that states as well as the central government have a "buffer stock" of protective gear.

Two days earlier, the country had restricted exports of common medicines such as fever-reducing paracetamol tablets and 25 other pharmaceutical ingredients, including vitamins B1 and B12.

"There is no need to panic," Prime Minister Narendra Modi tweeted last Tuesday. "We need to work together, take small yet important measures to ensure self-protection," he said. He also posted a notice with recommendations such as washing hands, social distancing, and avoiding touching one's own eyes, nose and mouth.