WASHINGTON -- The widening coronavirus outbreak is expected to dampen world economic growth at least briefly, the head of the International Monetary Fund warns.

The impact of the disease, "in the short term, is likely to bring some slowdown," IMF Managing Director Kristalina Georgieva told reporters here Friday. "In the long term, we don't know. We have to assess how quickly action is being taken to contain the spread of coronavirus and how effective this action is."

Effects are already manifesting, Georgieva reported. "We see some indirect impacts building up around manufacturing, value chains being impacted by the disruption caused by the virus," she said. "We see impact on travel and on tourism."

Severe acute respiratory syndrome ultimately had only a "relatively minor impact" on global growth, Georgieva said. SARS spread to 29 countries and regions and killed 774 people by the time it ran its course in 2003, according to the World Health Organization.

Georgieva said that "there was a dip in growth in the months during and immediately after the containment" of the epidemic. But then came a rebound, and growth for the year "ended up being just 0.1% lower," she added.

Yet China plays a much larger role in the international economy than it did 17 years ago.

"The Chinese economy at the time of SARS, in terms of share in the world economy, was smaller," Georgieva said. It accounted for 4% of global gross domestic product then but contributes 18% now, "and therefore we are seeing a country with more significance globally," she explained. 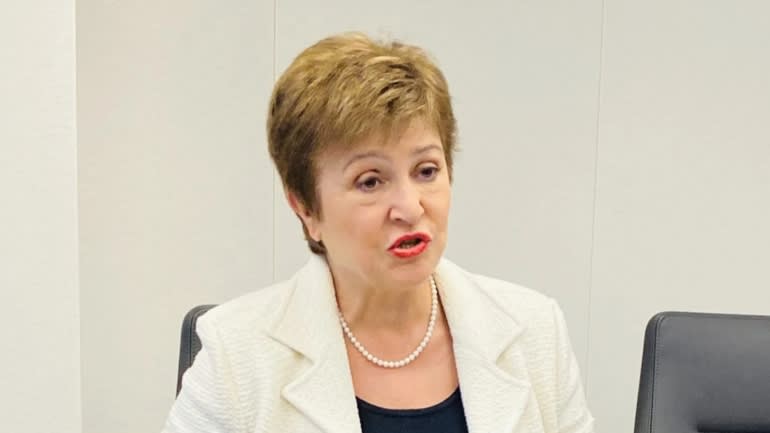 The repercussions of the coronavirus outbreak are already apparent in supply chains, according to Kristalina Georgieva, the IMF's managing director. (Photo by Takeshi Kawanami)

The IMF expects the world economy to expand 3.3% this year. "But growth remains sluggish, and we see risks still tilting to the downside," Georgieva said.

The fund plans to release its economic assessment of the coronavirus as early as this month. Concerns about the disease have already hit stock prices, with the Dow Jones Industrial Average falling 603 points this past Friday.

On monetary policy, Georgieva said she would "strongly encourage" central banks to retain their accommodative stance in 2020.

"If we didn't have this synchronized monetary policy, growth would have been in the zone that, by IMF assessment, lingers into recession," she said.

But the aggressive easing has led to debt exceeding pre-debt-crisis levels. "In search of yield, institutions are more open to take higher risk, and that risk buildup ought to be the center of attention," Georgieva said.

At the same time, central bank digital currencies are open to such risks as cyberattacks, as well as unintended consequences on a country's banking system, Georgieva said.

"What we recommend is a very careful approach to stepping into that," she said.

The U.S. and China signed their "phase one" trade deal in January. The IMF estimated in October that trade tensions will shave 0.8% off global GDP this year.

"It's very important to recognize that within this 0.8% less global GDP, only 0.3% is due to tariffs," Georgieva said. "The rest, 0.5, is due to uncertainty, investments not taking place, because of uncertainty," she added, indicating that faster global growth is unlikely without resolving ambiguities.

Georgieva also noted the "significantly reduced" risk of a disorderly British exit from the European Union. The U.K. left the EU on Friday, although negotiations remain unfinished.

"But it doesn't mean that uncertainty about Brexit has been eliminated altogether, because we are only at the end of the beginning of Brexit," she added, and said the IMF calculates a 3% loss to the U.K.'s economic output over a decade or more.