As price of oil slides and Beijing mends US trade ties, Moscow frets

MOSCOW -- Russia on Thursday imposed a temporary ban on Chinese nationals entering the country, its most radical step yet to prevent the spread of the coronavirus epidemic.

The previous month, on Jan. 31, the Kremlin closed 16 of 25 crossing points on its border with China. Shortly thereafter it suspended electronic visas to Chinese citizens, halted most flights and trains to and from China, and postponed an annual investment forum in the Black Sea resort of Sochi that had been expected to attract a large number of Chinese businesspeople.

But these restrictions pose some major economic risks for Moscow. China is Russia's largest trade partner, with trade turnover between the two countries reaching a record $110 billion last year. Moreover, Russian political elites have over the past several years championed closer economic ties with China as a bulwark against Western pressure. Trade and investment rose as Moscow and Beijing erected new pipelines and bridges across their border.

The fallout surrounding the coronavirus epidemic has already caused trade between Russia and China to plunge. During the first six weeks of 2020, Russian exports to China fell by almost a third, the Russian Customs Service revealed on Wednesday. Raw materials such as minerals and timber were most affected by the decline in trade.

Russia's Far East has so far borne much of the economic brunt from coronavirus-related restrictions. Many grocery stores in the region have experienced shortages and skyrocketing vegetable prices due to interruptions in supplies from China. Restrictions on travel from China have already deprived some local workers of their livelihoods. One local trade union recently appealed to Moscow for economic aid, stating that 2,000 of its truck drivers had lost their jobs since the Russian government closed the border with China. 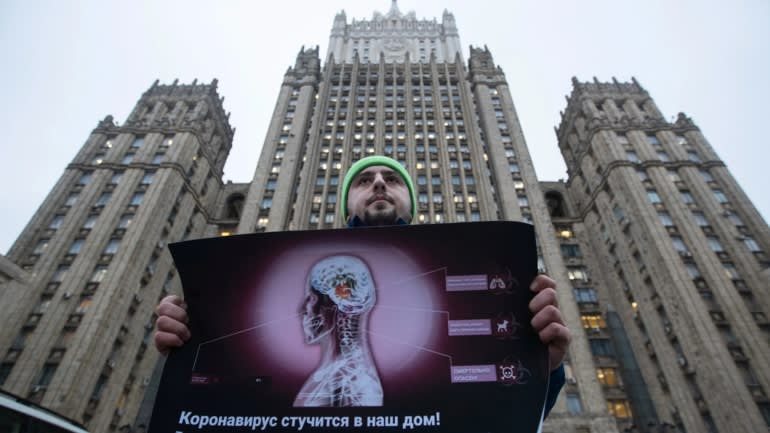 A one-man protest calls on Russian officials to do more to prevent the spread of the new virus in Moscow. The banner reads: "Coronavirus is knocking on our door!"    © AP

For Russia, the economic consequences could be quite serious if the epidemic does not subside over the next month or so, explained Artyom Lukin, a professor of international relations at the Far Eastern Federal University in Vladivostok.

"If this whole situation continues for several more months, many small and medium sized businesses will simply go bankrupt since they depend on business from China," Lukin said. "Big corporations obviously won't go bankrupt, but they face the threat of losing considerable profits from the Chinese economy pushing down prices for raw materials like oil."

The biggest concern for Russia is that the coronavirus could send the price of oil tumbling. China's oil demand has fallen by 20% since the outbreak of the epidemic in late January, a development that has unnerved global markets. Oil fell from a high of $69 a barrel in January to below $57 a barrel on Tuesday.

Prices could collapse even further unless the outbreak is reined in over the next couple months, warned Alexey Belogoryev, deputy director of energy studies at the Moscow-based Institute for Energy and Finance.

"If the epidemic continues into May or June, then the price of oil will definitely fall below $50 and OPEC won't be able to stop it because China is the primary expanding market and it therefore exerts a major influence on [global] demand," he said.

"A fall in oil prices means lower revenues from oil for our companies and a worsened trade balance. It also would put downward pressure on the ruble, which will provide further risks to many sectors of the Russian economy," Belogoryev added.

The epidemic comes with the Sino-Russian trade relationship already experiencing strains over agricultural disputes. Following a decision by China to limit the import of Russian meat, Moscow retaliated by imposing restrictions on Chinese citrus and stone fruits. In turn, Beijing raised phytosanitary standards for Russian timber.

Although these disagreements could have been quickly resolved under normal circumstances, the resignation of the entire Russian government on Jan. 15 has stalled the process, explained Alexander Gabuev, a senior fellow at the Carnegie Moscow Center.

"Until we see the appointment of all the key government officials, I don't think the lower-level officials will have the political power to resolve these issues," he said.

Those tensions are likely to become exacerbated after the U.S. and China signed their 'phase one' trade deal on Jan. 15. Under the agreement, Beijing committed to increasing its imports of American goods by $200 billion over the next two years in exchange for tariff relief.

Moscow had been one of the major beneficiaries of the trade war between Washington and Beijing.

In particular, China's counter-tariffs against American soybeans, pork and liquefied natural gas had presented Russia with an opportunity to enter the Chinese market for these goods. Russian agricultural exports to China jumped by 51.3% between 2017 and 2018 to reach $3.21 billion. Chinese companies had also stepped up their investments in Russian LNG projects, such as the $21 billion Arctic LNG 2 project.

On Jan. 24, Russian presidential adviser Maxim Oreshkin called the U.S.-China trade deal "a big ticking time bomb" and predicted that it would promote global trade disputes over the next two years.

"Now Russia has a smaller market to play with," Gabuev said. He explained that following the phase one trade deal with the U.S., Russia would have a harder time increasing its share of Chinese energy and agricultural markets since a good deal of China's growing demand in those areas will likely be met by the U.S.