Coronavirus scams prey on the fearful in China, Japan and beyond A woman peers into her phone on a rainy night in Beijing: Across Asia, con artists and cyberthieves are looking to take advantage of fear of the coronavirus.   © Reuters
MICHELLE CHAN, FRANCESCA REGALADO and CHENG TING-FANG, Nikkei staff writersMarch 4, 2020 14:52 JST | China
CopyCopied

HONG KONG/TOKYO/TAIPEI -- The new coronavirus outbreak gripping the world has unleashed a wave of scams and fake news in Asia, from rip-offs and computer viruses to false reports of infected leaders and grisly tales of dead bodies.

The World Health Organization, busy fighting the actual epidemic, issued a warning that cybercriminals "are disguising themselves as WHO to steal money or sensitive information." Short supplies of face masks, meanwhile, have given price gougers and swindlers an easy opportunity.

In Hong Kong, Maggie Cheung thought she was buying three-ply, U.S.-made surgical masks through a Facebook ad in late January. Instead, she received flimsy masks without proper labels.

Cheung, 53, said she can no longer contact the seller because the Facebook page has been deleted. "I should have done more background checks on the shop," she said. "But I was very desperate because masks were running out everywhere."

More than 1,000 people had fallen victim to mask scams in the city as of last Saturday, involving over HK$31 million ($3.99 million), the Hong Kong Police Force said. Likewise, in mainland China, police had arrested more than 1,500 people in connection with nearly 700 scams involving knockoff masks and other medical supplies as of late February, according to the state news agency Xinhua.

No one knows exactly how many substandard masks are circulating in China, where the virus has killed over 2,900 people. But in Jiangsu Province alone, local authorities have seized at least 35 million such masks during the outbreak, according to a government website.

Masks are a focus of unscrupulous merchants outside China as well.

In Tokyo -- where lining up for masks and toilet paper has become a daily ritual -- architect and allergy sufferer Wu Chaoyen said he felt "completely tricked" by an independent seller on Amazon.

Wu recently found a box of 30 masks for around $45, which he said was half the other listed prices but still "10 times" higher than normal. "I just ordered it right away," he said. Then he got the confirmation email: The masks would be delivered months from now, on Aug. 2.

"It was like I'm purchasing a future product," he said, recounting how he spent "hours" fighting to have the order canceled at no charge. 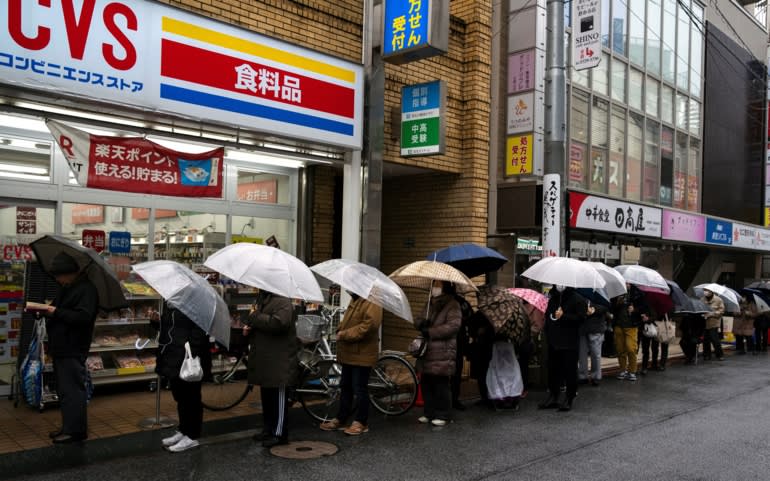 Lining up outside pharmacies to buy masks and other supplies has become a morning ritual in Japan.   © Reuters

In Southeast Asia, Indonesian online mall Tokopedia is stamping out mask listings with outrageous prices, as the country grapples with its first coronavirus cases confirmed on Monday.

"Tokopedia actively ensures there is no sudden surge in prices, including for face mask products," said Nuraini Razak, a spokesperson. Merchants can set prices within reason, but "we must abide by applicable norms and laws in the country through proactive actions," she said.

Over in the Philippines, where mask supplies were already tight due to the eruption of the Taal Volcano in January, a woman named Ethel Arenas started a Facebook group with two friends to help connect buyers and sellers. The group has swelled to over 20,000 members, but Arenas has blocked several merchants for attempting to bilk customers.

"Some sellers are telling the buyers that they need to pay" to reserve masks, on top of steep markups, she said.

Treacherous marketplace aside, Facebook is locked in an endless battle with misinformation. The social network has vowed to ban ads peddling "cures" or special protection against the coronavirus. But it is hard to stop a rumor mill in overdrive.

One chain text in the Philippines claimed the WHO had accused the country of hiding cases and deaths. Alarmed, the Department of Health began posting "mythbuster" messages on Facebook. The first stated that, no, the coronavirus cannot be mailed into the country on packages from China. A man checks out a protective suit for sale in Jakarta. Indonesia confirmed its first coronavirus cases this week.   © Reuters

Taiwanese officials are fighting fake virus news, too, with the Criminal Investigation Bureau reporting 120 cases between Jan. 23 and Feb. 27.

On the island, pushing false information about the outbreak is punishable by fines of up to 3 million New Taiwan dollars ($100,000). But this has not stopped some from spreading rumors that the pathogen is out of control; that President Tsai Ing-wen and Taipei Mayor Ko Wen-je have the virus; that the authorities are burning bodies outside the presidential office; or that dead victims are being dumped in rivers.

As consumers scramble to protect themselves and dubious information sows confusion, hackers are lurking.

Kaspersky's Rosemarie Gonzales told the Nikkei Asian Review that the company spotted disguised malware files early in the outbreak, followed by phishing emails, typically targeting individuals looking to learn about the virus. She said the threats have been found globally, including some parts of the Asia-Pacific region.

"Cybercriminals are clever," Gonzales said. "They are aware of how human emotions, either excitement or fear, allow individuals to be quite careless online." Masked pedestrians cross a street in Beijing: Millions of fake, substandard masks have been seized in the country.   © Reuters

Whether scammers' methods are digital or analog, a common thread connects them -- a willingness to capitalize on a global health crisis.

"Sadly and quite tragically, there are many people who appear to lack ethics and are willing to exploit people and situations for their own advantage," said Thomas Plante, a psychologist and professor at Santa Clara and Stanford universities in the U.S. "To find a way to live with themselves, they can do mental gymnastics to justify themselves."

Plante, who wrote a book called "Do the Right Thing: Living Ethically in an Unethical World," advises: "We really need to appeal to everyone to tap into the better angels of their nature."