Foxconn, Samsung and Murata at risk from China exposure

TOKYO/TAIPEI -- Asian chipmakers and other high-tech manufacturers face a nearly $11 billion hit to profits -- a 7% drop -- in fiscal 2020 as the novel coronavirus outbreak saps both demand and their supply chains in China, according to research by Goldman Sachs.

The outbreak marks a setback for companies just starting to recover from headwinds such as the U.S.-China trade war and a cyclical downturn in chip demand. East Asia's tech manufacturers in turn are watched as a leading indicator of global economic trends.

"We think the pace of recovery in capacity utilization and monthly shipments over the next one to two months will determine the direction of share prices," Goldman analysts wrote in February in a report covering 105 major Asian manufacturers with various levels of mainland China exposure.

In a worst-case scenario, Goldman estimates that Foxconn’s operating profit for the current fiscal year could fall short of the bank's original estimate by as much as 39%, or $1.8 billion. Revenue at the company, which trades as Hon Hai Precision Industry, is projected to be $15.4 billion lower than previously estimated, according to a Goldman's report seen by Nikkei. 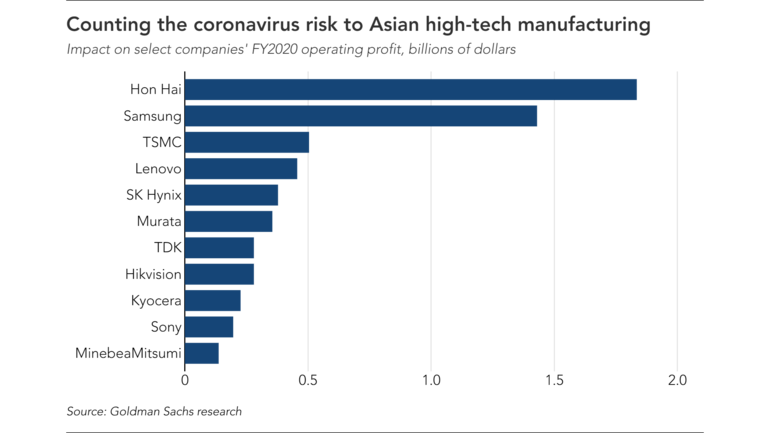 Facing a worker shortage in mainland China, where it has the bulk of its capacity, the company says it can only meet about half of demand owing to lower factory usage.

During a recent investors call, Foxconn Chairman Young Liu said that with the virus spreading beyond China, demand for smartphones and other final products could suffer. "Given that there are still uncertainties about the coronavirus outbreak, it's hard to estimate the impact for the whole year," he said.

For its earnings projections, Goldman Sachs assumed that Chinese demand will fall 30% over a six-month period, and that factory utilization was assumed to remain at half capacity for eight weeks starting in February.

The brokerage then analyzed a range of factors for each company within that context, including production and shipment rates in China. The outcomes for fiscal 2020 were then compared with scenarios where there is no coronavirus impact.

TSMC, the world's leading contract chipmaker, is poised to suffer a $500 million decline in annual operating profit, representing a 3% drop. Revenue is seen retreating by the same percentage, or $1.4 billion. Taiwan Semiconductor Manufacturing Co.'s operating profit is expected to slide $500 million this year due to the coronavirus, according to a Goldman Sachs estimate.   © TSMC

TSMC has forecast revenue will rise 20% this year, boosted by investment in 5G wireless networks. The company has announced plans for up to $16 billion in capital spending.

Now, the chipmaker faces delays in parts supplies, among other factors that could stall production. However, since TSMC makes all of its most advanced products in Taiwan, it is less exposed than Foxconn to the coronavirus spillover on the Chinese mainland.

Samsung Electronics faces a $1.4 billion hit to its operating profit. But because Goldman's estimates do not include the coronavirus's disruption of South Korea's domestic demand and supply chains, the negative impact on the company may be greater still.

In Japan, the biggest loser appears to be Apple component maker Murata Manufacturing. The coronavirus will likely hurt sales of multilayered ceramic capacitors, of which the company holds the top global share. Goldman estimates its operating profit will fall by nearly $355 million in fiscal 2020 due to the virus.

For Japan's TDK, the battery segment generates the majority of its profit, and its production base is mainly located in China's Fujian Province. Although facility operations are steadily recovering, operating profit is set to shrink 19%, reports Goldman.

On the other hand, the slump in demand for smartphones and other end products will likely be temporary. "There is significant demand that has been carried forward" due to the outbreak, said Daiki Takayama at Goldman Sachs Japan.

If the epidemic is brought under control, the postponed orders will potentially drive a rebound in earnings. Foxconn expects sales to recover in the second quarter of this year, which would bring the first half on par with the year-earlier figure, Liu said.