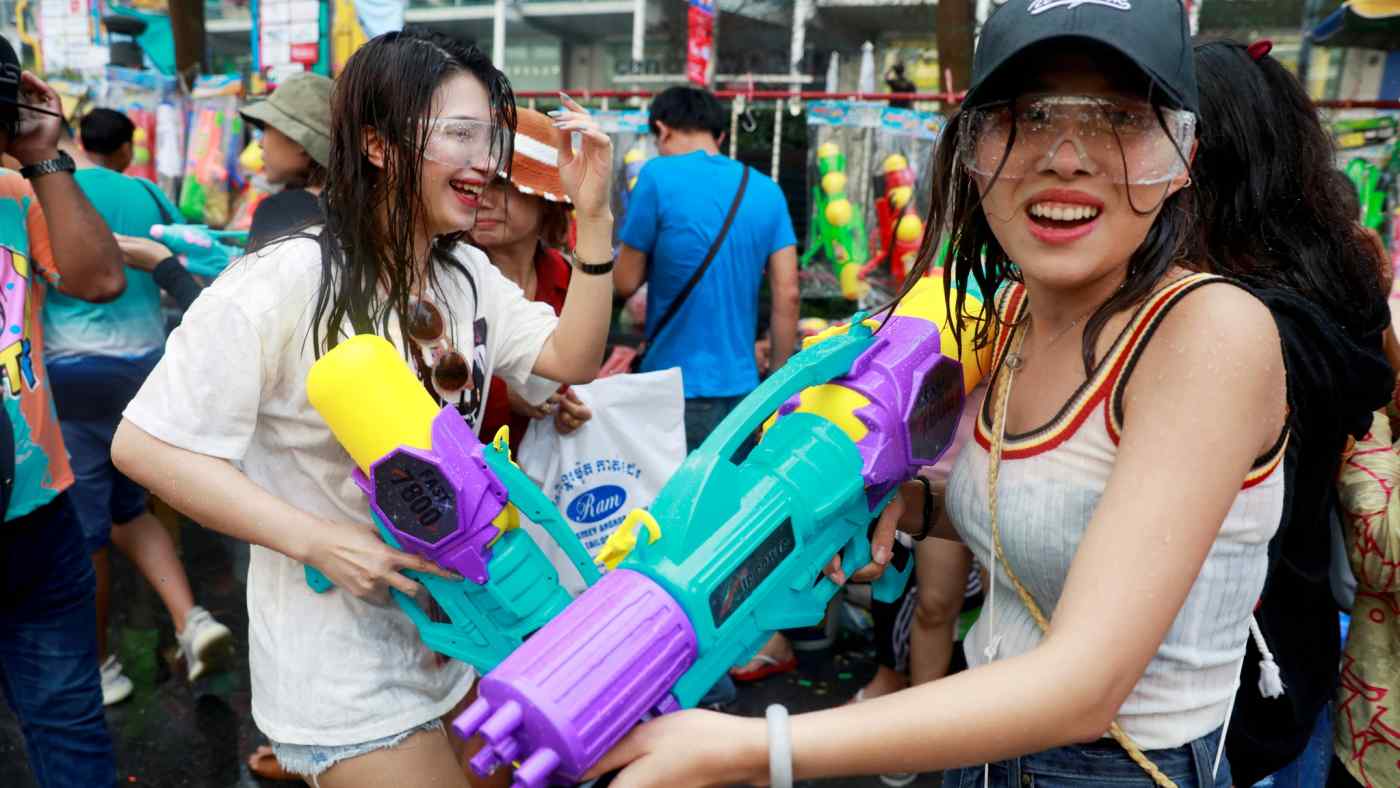 BANGKOK -- Worries about spreading coronavirus has forced tourist associations in Thailand to ax Songkran celebrations, a tradition wildly popular with locals and tourists.

Khao San Road, a backpackers' haven in Bangkok, will be quiet come mid-April. Street parties, loud music and beauty contests of yore will not be held during the water-throwing festival this year, as Thailand tries to contain the spread of coronavirus. Tourism Authority of Thailand is hoping to move the festival to July instead and is awaiting government approval of this plan.

Songkran celebrations begin on April 13 and last for three days. During this time, locals visit temples to pray and make offerings, bathe Buddha figurines and images to wash away their sins and bad luck, and spray water on each other to bring longevity, health and prosperity.

The festival takes place during the hottest season in Thailand and the water fight is hugely popular with young tourists on Khao San Road. Yet, this year will be the second time that Khao San Road will give up Songkran celebrations.

Last year, authorities called off activities so that they could prepare for the coronation of King Maha Vajiralongkorn as the palace is less than a kilometer south of the street.

Khao San Road is not the only victim of coronavirus this year. Chiang Mai, the second largest city about 720 kilometers north of Bangkok, announced the cancellation of all major Songkran festivities on Wednesday. Other tourist destinations such as Hat Yai, Bang Saen, Khon Kaen, Pattaya, and Phuket have also called off Songkran celebrations. Songkran is one of the most important Thai festivals for its people and tourists.    © Reuters

Thailand has 75 confirmed cases of the new coronavirus, with one fatality, as of Friday.

The cancellation of Songkran celebrations will deal another blow to Thailand's already hard-hit tourist industry, which broadly accounts for 20% of the kingdom's gross domestic product. According to the Tourism and Sport Ministry, tourist arrivals in February was down 44% from a year ago. Chinese tourists, which form the majority of arrivals, was down 85%.

This has led Kasikorn Research Center to revise down its Thai economic growth forecast to 0.5% from 2.7%, saying that the pandemic will cause tourist arrivals to drop by 20.8% year-on-year in 2020. The research arm of Kasikornbank said this amounted to 410 billion baht ($13 billion) in tourism income.

To try to claw back some of those losses, Tourism Authority of Thailand Governor Yuthasak Supasorn said the delay of the festival could help. "Even the tomb-sweeping day in China, during which families pay respect to ancestors, had to be postponed in some areas to allow for virus containment," said Yuthasak. "Postponing a festival should be on the table in Thailand, too."

The plan already received a nod from Tourism and Sports Minister Phiphat Ratchakitprakarn and is now awaiting the green light from the Culture Ministry.

The tourism industry is also hoping to mitigate the impact of a drop in foreign arrivals by encouraging internal travel. In 2019, Thais took 166.84 million trips within the country, spending 1.08 trillion baht. Tourism Council of Thailand has set a goal to encourage locals to take 200 million trips in 2020 and it is hoped that moving Songkran can give the industry a boost later in the year.

"This is hard for all of us, but it's worth trying," Yuthasak said. "We don't want to lose the opportunity creased by a big festival, as most events have already been canceled."

But another official sounded a note of optimism. "People still can enjoy their water play. We don't have any authority to ban people playing with water during the festival," said Chalermluck Kebsup, mayor of Patong, an area popular with tourists in Phuket.