TOKYO -- The deadly coronavirus outbreak is giving China Inc. a chance to show its charitable side -- and score points with Beijing and social conscious shareholders in the process.

Around 130 listed companies have pledged about 725 million yuan ($104 million), either in cash or in kind, as of Thursday morning, according to a Nikkei Asian Review tally of official disclosures on the Shanghai and Shenzhen stock exchange websites.

In brief disclosures, most companies emphasized that they are fulfilling their "corporate social responsibilities." This comes amid a rise in the influence of ESG investing, in which environmental, social and governance-related issues are considered alongside more traditional measure of company performance such as profit or loss.

Cash is just one way companies are pitching in. Some are using their global connections to help alleviate serious material shortages brought on by the virus and subsequent travel restrictions.

Ningbo Ronbay New Energy Technology, a lithium-ion battery producer, has given 2 million yuan to three charities in Hubei Province, the epicenter of the outbreak, and announced that it will use its supply chain to import masks, protective suits, and other urgently needed items. The company said it has procured 8,500 masks via its South Korean subsidiary JAESE Energy and shipped them out on Tuesday.

While not a Chinese company per se, Yum China, the largest fast food chain operator in the country, is providing free Kentucky Fried Chicken and Pizza Hut meals for medical workers in Wuhan. CEO Joey Wat said at a Thursday morning teleconference that the New York-listed company is providing "over a 1,000 meals per day" in the virus-hit city, and has also donated 3 million yuan to fighting the virus. This comes as the company has had to temporarily close 30% of their outlets in the country, which numbered 9,200 as of year-end, while sales have dropped 40-50% at shops that remain open.

While a desire to help is one factor in such donations, some companies have been quite frank about the material benefits of giving. Shenzhen-listed Beijing Yanjing Brewery announced it is giving a combined 12 million yuan in cash to various Red Cross organizations and 1.5 million yuan worth of medical items and drinking water to a Beijing hospital. On Wednesday, the beer brewer said it is "proactively performing its social responsibility" and that its donations will "help further enhance social image and influence of the company." Over 20 companies have indicated similar hopes that donations will raise their social profile.

A number of pharmaceutical companies were quick to respond to the crisis. Shanghai-listed Zhejiang Medicine was one of the first publicly traded mainland companies to disclose its donations to Wuhan when the market reopened on Monday, after the prolonged Lunar New Year break. The drug company's donation package included 1 million yuan in cash as well as by 5.1 million yuan worth of its own anti-infective drugs. In its official disclosure, Zhejiang Medicine said the donation reflects its social responsibility and will enhance its corporate image and influence. The company also took the opportunity to describe its drug in detail.

A number of companies see a chance to demonstrate their political rectitude. Dalian-based retail chain Dashang seems to be the largest single donor so far, pledging to give 60 million yuan to charity jointly with its controlling shareholder Dashang Group. The board of the Shanghai-listed company said it has "proactively responded to the call by the Communist Party Committee of the Dashang Group" and the listed arm will churn out 20 million yuan of the total cash giving. 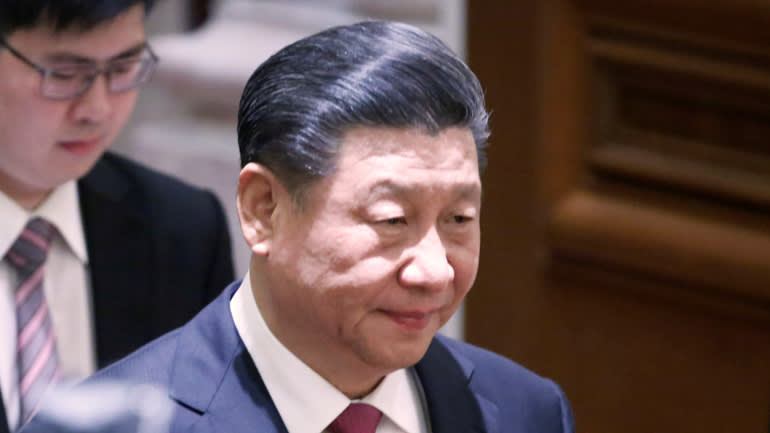 Chinese companies could score political points with Xi Jinping and the party by donating to fight the coronavirus.   © Reuters

Dashang is far from alone. Over 20 companies have described their charitable acts in terms that link it closely to the party and government.

Shenzhen-listed Sinosteel Anhui Tianyuan Technology said its 20 million yuan cash donation, revealed on Wednesday, was made "to further implement the spirit of the important instructions of General Secretary Xi Jinping and the decision-making and deployment of the Party Central Committee and the State Council on prevention and control of pneumonitis caused by new coronavirus." As a subsidiary of one of the 96 central companies -- top-tier state-owned enterprises directly controlled by the central government -- Sinosteel Anhui stressed that it has to "earnestly fulfill social responsibility as a central company." It did not describe how is different from a corporate responsibility by non-central companies and their units.

Some companies are going even further in their rhetoric, even after Xi and the party made a rare acknowledgement that there have been shortcomings in their response to the outbreak.

The board of Jiangsu Qionghua High-Tech said it has "seriously studied and implement" the spirit of Xi's speech on the contagion prevention. The company on Tuesday offered to donate 20,000 tons of the disinfectants it produces.

Shandong Sunway Petrochemical Engineering, which pledged a million yuan to a local Red Cross, echoed one of Xi's catchphrase in its press release, saying the donation is intended "to fulfill the core values of socialism in the new era."