PALO ALTO, U.S. -- Costco is struggling to keep up with the surge in coronavirus-driven panic buying as same-store sales jumped 12.1% in February, the U.S. wholesaler said in an earnings call on Thursday.

Costco, which operates one of the biggest wholesale chains in the U.S., acknowledged that its supply chain has been compromised by the outbreak, at the same time that shoppers are keen to stock up on everything from toilet paper to food.

"Members are turning to us for a variety of items associated with preparing for and dealing with the virus," Costco CFO Richard A. Galanti said during the earnings call.

Shelf-stable dry grocery items, cleaning supplies, water, paper goods, hand sanitizers, disinfectants, health and beauty aids, water filtration and food storage items are among the products most in demand over the past few weeks, according to Galanti. 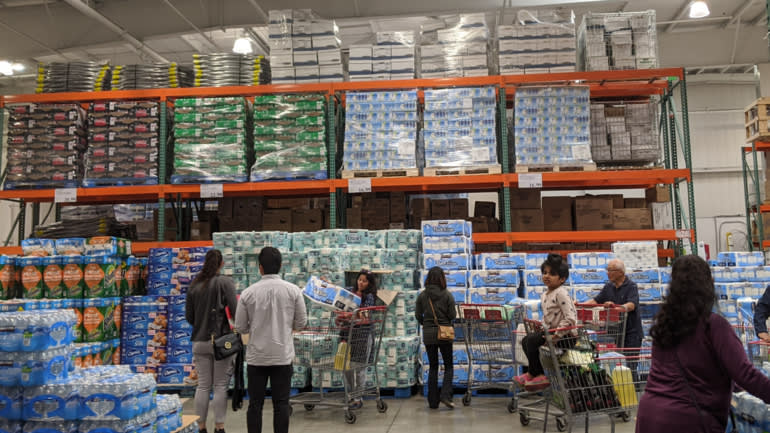 Shoppers stock up on toilet paper at a Costco store in Sunnyvale, California. (Photo by Yifan Yu)

"We're doing our best to stay in stock on these and other items. We are getting deliveries daily, but still not enough given the increased levels of demand on certain key items," said Galanti.

"Our buying staff, both here regionally and abroad, are working around the clock to procure supplies from both existing suppliers and from other sources where possible," he added.

The discount retailer said it is battling with two different supply issues: one is items related to coronavirus prevention, such as water and sanitizers, and the other is supply of regular items including everything from furniture to apparel to electronics coming from China.

The extended closure of many manufacturing facilities in China has negatively impacted Costco's supply chain, but the situation has been improving in recent weeks with factories reopening and production volume increases. "It's now starting to get a little bit back to normal on regular stuff," Galanti said.

"But on some of the virus-related items that people are buying, like water and sanitizing items and paper towels, that's going to take a little bit longer," he added.

Despite it being a weekday, a Costco store in Sunnyvale, California, was packed with customers when the Nikkei Asian Review visited the location on Thursday morning.

Toilet paper, cleaning wipes, bottled water and diapers were among the most common items in people's shopping carts, and a Costco staff member told Nikkei that most of those essentials have typically sold out before the end of the day in the past week. Shelves at a Costco store in Sunnyvale, California, are half bare on a recent weekday. (Photo by Yifan Yu)

"The best chance to get the life essentials you need is coming to the store during day time to avoid the crowd and long checkout lines," the staff member said.

Apart from the supply challenges, Costco said its overall store operations have not been impacted by the outbreak, with only a few total days of closures at a couple of locations in South Korea, and its Shanghai location being subject to limitations on the number of shoppers allowed in the facility at any given time due to China's crowd control requirements.

The company said the Shanghai store remained the top or second-best performing location around the globe since its opening last August, but "things have changed a little bit" since the virus hit.

Costco has previously said it plans to open a second location in China in 2021.

For the three months ended Feb. 16, Costco reported total revenue growth of 11% on the year to $39.07 billion. For the four-week reporting month of February, ended March 1, the company recorded net sales of $12.20 billion, an increase of 13.8% from last year.