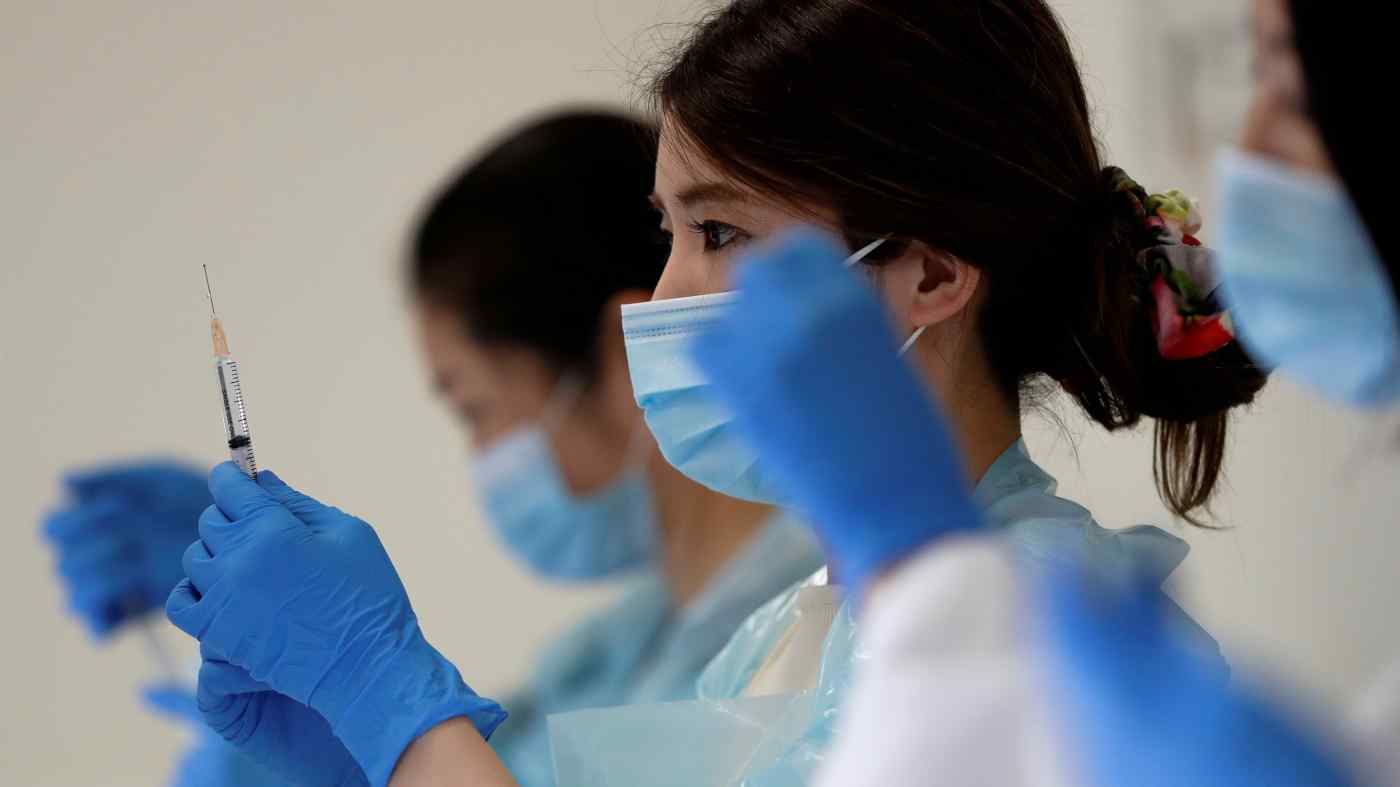 TOKYO -- Delta coronavirus variants are quickly spreading in Asia and casting doubts on prospects of restarting the movement of people and business activities in the face of accelerated vaccination efforts that only just took off.

In Japan, it has been more than two months since the vaccination program for people over 65 started in April.

"I'm getting my second dose soon, on 30th," said a woman who received her first dose in a mass vaccination site in Shinjuku district in Tokyo. Once fully vaccinated, "I want to see my 107-year-old mother and my daughter," who live in Tochigi and Kagoshima prefectures, the woman said.

Almost half of Japan's 36 million elderly people have received at least one vaccine dose, a figure that is a relief to many.

"My mother is in an elderly care home, so I'm hoping to meet her after getting vaccinated," said a 62-year-old man who was at a vaccination site on Tuesday, on his way to get his first Moderna jab. Vaccination have also started at workplaces for the younger population last week.

While many Asian countries are finally gaining traction toward vaccinating their population, the spread of Delta variants are weighing on hopes of resuming economic activities that has long been under strain.

Delta infections have surged in the U.K., despite over 60% of the total population has already been vaccinated with at least one shot. England has postponed ending its lockdown. In India, where the Delta variant was first identified, a mutated form of the variant, "Delta plus," is being watched by health authorities. 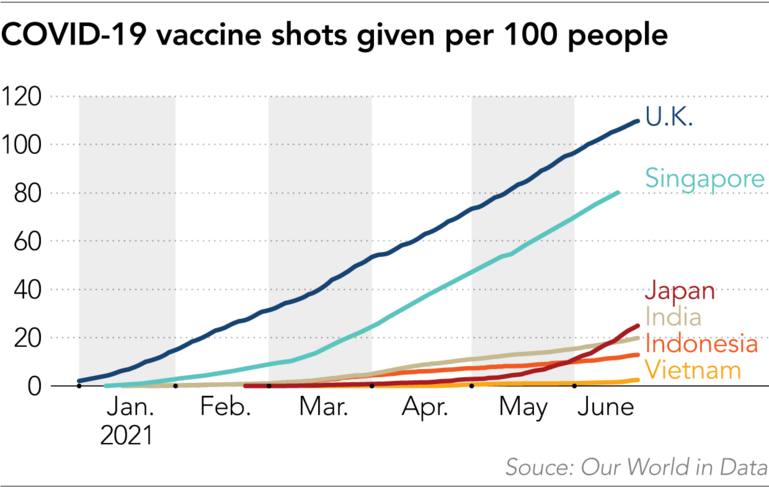 According to data from outbreak.info, compiled by Scripps Research in the U.S., Delta strains are replacing the previous strains of COVID-19 infections.

In Singapore, which leads the region in vaccinations, as much as 90% of COVID-19 of sequenced samples were identified as the Delta strain as of June. There was recently a cluster at Bukit Merah View food center, according to local reports.

The percentage was almost 80% in Vietnam by the end of May, and also as much as 80% in Indonesia by early June. In Vietnam, local authorities said on June 15 that 55 workers at the Ho Chi Minh City Hospital for Tropical Diseases, a state-run institute, had tested positive. All of them had taken two Astra Zeneca vaccines.

In Indonesia, cases are once again rising. Daily confirmed COVID-19 cases in Indonesia rose to 14,536 on Monday, from about 5,000 at the beginning of the month. The country just tightened movement restrictions in some areas for two weeks from Tuesday.

Thailand is also on alert after it confirmed the Delta variant in Bangkok, although Prime Minister Prayuth Chan-ocha's said the country would "fully reopen" within about four months. According to the health officials, there were 235 confirmed cases of Delta variant in Thailand. All of the cases were found in cases at a construction site in Bangkok. The 235 confirmed Delta cases account for 6% of total confirm cases. The rest of more than 90% confirmed cases were Alpha variant, which was first identified in the U.K.

Virus expert Yong Poovorawan, of Chulalongkorn University, said new confirmed Delta cases are expected to rise substantially higher in the near future, which meant the efficiency of vaccines and protection measures could drop because the strain can resist some vaccines.

"We may need to have the third shot of vaccines to inject to Thais in order to increase immunity," Yong said.

Movement of people is likely to increase in Japan, which just ended a state of emergency on Sunday. The Olympic Games is scheduled to begin in July.

The overall number of cases in Japan dropped from May, but "there are no notable decreases in the effective reproduction number [which indicates infection trajectory] and infections among young people in their 20s and 30s," said Chika Shirai, medical doctor and director of Hirakata city's public health center in Osaka prefecture. She added that the cases could quickly rise once again.

While vaccines may not make people completely immune from COVID-19, it "would lead to much less risk of infecting others," said Shirai. Still, "there would be a need to tell people to continue taking basic preventive measures such as hand washing and masks" even after getting two jabs, especially when only a portion of the population has been vaccinated.

She added that vaccinated individuals would be able to resume some activities but should act "with care."