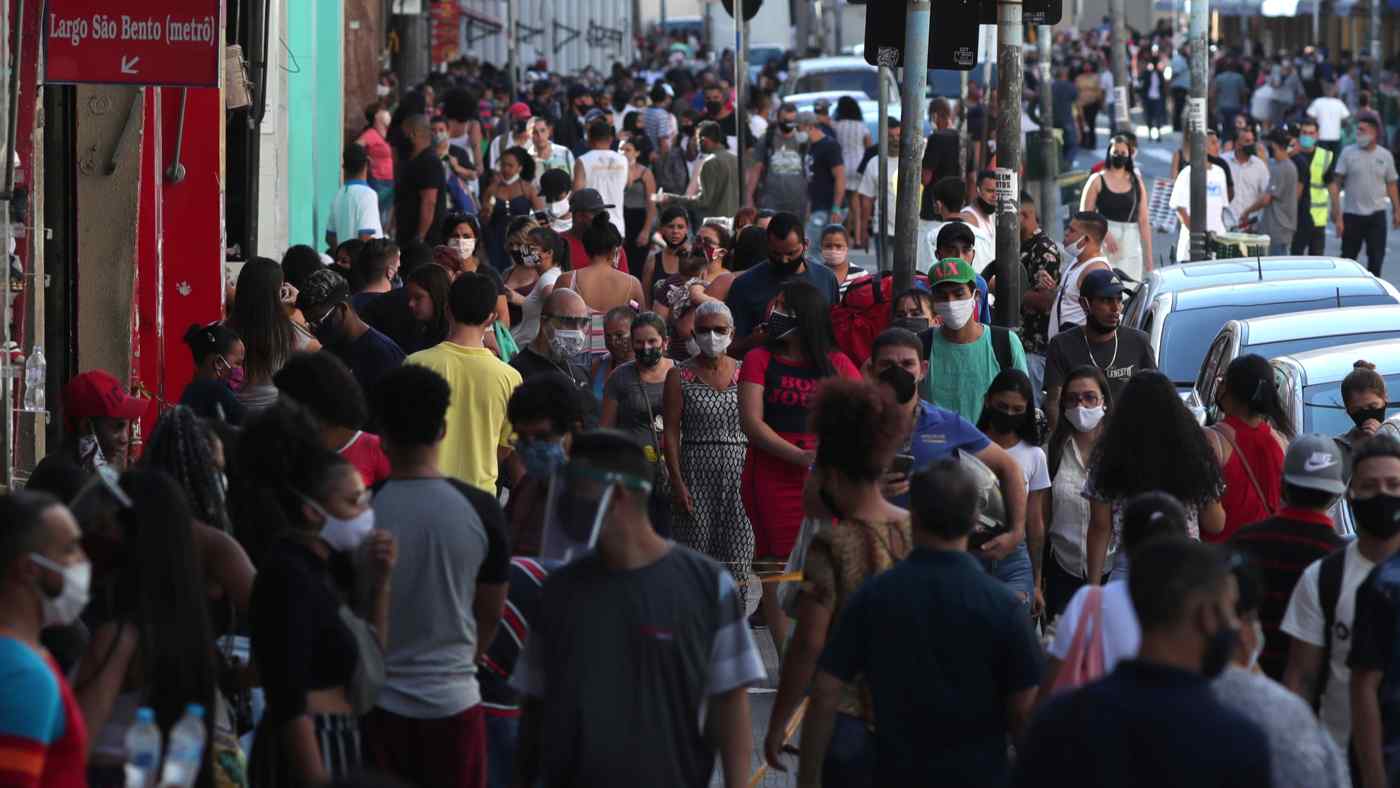 The seven-day moving average of new daily infections reached a record of over 120,000 on Wednesday, with more than 94,000 -- about four in five -- in developing countries. These figures are based on World Health Organization data and United Nations country classifications.

With many of these countries, including crucial links in global supply chains, moving to reopen their economies even as new infections mount, the global health and economic consequences could be severe without a coordinated international response to the crisis.

Cumulative cases in emerging nations, at 3.57 million, topped the industrialized-country total for the first time since the outbreak went global, with more than 2 million reported in the past few weeks.

Nearly half of all new cases in emerging economies come from Latin America, particularly Brazil, which now has the second-highest number of reported cases behind only the U.S.

"With those on the fringes having to return to work," whether officially or not, "the risk of infection increases," said Luciana Barros, who does charitable work in Brazil's favelas, or slums.

Fewer than 30% of jobs in emerging economies can be performed from home, compared with 40% in developed countries, according to an analysis by the U.S.-based National Bureau of Economic Research. The figure for Brazil comes in at just 26%.

The Brazilian government has implemented an emergency income program for poor households, but this provides just 600 reals ($122) a month per person.

And the program was "not enough" to help everyone who needs aid, said Barros, who noted that many slip through the cracks. According to the United Nations' Economic Commission for Latin America and the Caribbean, 215 million people in the region -- 34.7% of the population -- live below the poverty line.

Many of these countries have moved to reopen their economies early to allay the anger of an economically suffering public, but this gives the virus more opportunities to spread. Brazil has seen COVID-19 clusters associated with food processing plants. Mexico has resumed production of auto parts as U.S. plants reopen, even as the outbreak there shows no signs of slowing.

Fragile medical infrastructure is exacerbating the problem in such countries as Peru, which has reported more than twice as many cases as China in a population of just 32 million. More than 600 people in Peru have died from the virus without being admitted to a hospital. President Martin Vizcarra has lamented that the country's medical system has been neglected for years.

The onset of winter may further promote the spread of the virus in the southern hemisphere. Researchers at the University of Sydney found in a recent study that a 1% drop in relative humidity could increase COVID-19 cases by 6%.

Meanwhile, Middle Eastern countries such as Iran and Saudi Arabia are grappling with a second wave, with new cases surpassing peaks from earlier in the spring. Many residents are not adhering to social distancing, and religious leaders initially balked at closing mosques and other religious facilities. Infections among migrant workers from Asian countries such as India are a factor as well.

Emerging countries face not only the direct economic impact of the outbreak, but also a drop in vital remittances amid a global economic slump.

More than 160 million people worldwide send money to family in other countries. Many work in industries especially hard hit by the coronavirus, such as the service sector. The World Bank forecasts a 20% drop in international remittances to low- and middle-income countries this year.

Several countries squeezed by the pandemic are seeking support from international institutions. Chile and Peru have requested flexible credit lines from the International Monetary Fund, while the Philippines has secured $4 billion in financing from sources including the Asian Development Bank.

Such assistance will be essential for developed countries to minimize their own risk. The World Bank's global economic outlook released Monday slashed this year's growth forecasts for Brazil and India, where the virus is also running rampant, and warned that the global economy could shrink as much as 8% under a downside scenario.