Men wearing masks sit on a bus in the Nizamuddin district of New Delhi that will take them to a quarantine facility on March 31, amid concerns about the spread of the coronavirus.   © Reuters
KIRAN SHARMA, Nikkei staff writerApril 2, 2020 20:11 JST | India
CopyCopied

NEW DELHI -- India is struggling to contain the spike in new coronavirus cases despite imposing a nationwide 21-day lockdown last week. Fears of an uncontrollable outbreak are growing, as many potential carriers of the virus are untraceable.

Authorities across India are scrambling to locate, test and isolate hundreds of people who spread across the country after attending a religious gathering at a mosque in the capital that has become a hot spot for the virus. The mosque outbreak parallels one that centered on a church in the South Korean city of Daegu in February.

India has so far reported 1,965 confirmed coronavirus cases and 50 deaths.

As of Wednesday evening -- day eight of the three-week lockdown -- more than 100 of India's confirmed coronavirus cases have been linked to an event at the Markaz mosque, the international headquarters of Tablighi Jamaat, a Muslim missionary sect. Around 4,000 devotees are believed to have taken part in the event, including people from Indonesia and Malaysia.

"One of the main reasons for the latest spike in positive cases is the travel by members of Tablighi Jamaat across the country," Luv Aggarwal, joint secretary in the Ministry of Health and Family Welfare, told a media briefing on Wednesday. An "intensive drive" is being launched to trace all those linked to the New Delhi event, he said.

Mukhtar Abbas Naqvi, India's minister for minority affairs, called Tablighi Jamaat's actions a "Talibani crime" that cannot be forgiven. "They have put the lives of many people in danger. Strict action should be taken against such people and organizations that defy government directions," Naqvi, a Muslim, told a local news agency. A bus prepares to take people suspected of having the coronavirus to a quarantine facility in the Nizamuddin district of New Delhi on March 30.   © Reuters

According to Delhi Chief Minister Arvind Kejriwal, the religious event took place around March 12 to 13, after which many attendees left the city for other parts of the country. Many others remained at the mosque.

By March 31, 1,548 people had been evacuated from the mosque, of whom 24 tested positive for coronavirus and 441 showed symptoms and were hospitalized. Kejriwal said the rest had been quarantined separately.

Calling it "an irresponsible act" to host a large religious event while the whole world was fighting the coronavirus pandemic by practicing social distancing, Kejriwal said the group has endangered lives.

"It has been conveyed to us that many people who attended the mosque event are now spread across the country. It's scary to even think how many [more] they would have come in contact with," Kejriwal said.

A TV news report said attendees came from far and wide: from the southern states of Tamil Nadu, Andhra Pradesh and Telangana, to the remote islands of Andaman and Nicobar in the Indian Ocean; from Jammu and Kashmir in the north to the far northeastern state of Assam. The report said some 300 to 600 people from south India who attended the event remain unidentified. Around 500 people in the south with links to the event have been quarantined.

The gathering was planned long before the nationwide lockdown came into force on March 25. Authorities said it was held despite government orders not to congregate in large groups.

According to a statement on Tuesday by the Ministry of Home Affairs, about 824 foreign Tablighi Jamaat employees were in various parts of India doing missionary work as of March 21, along with around 2,100 Indians. In addition to the missionaries, another 216 foreign nationals were staying in the mosque, along with more than 1,500 Indian Tablighi Jamaat workers. A municipal worker sprays disinfectant on migrant workers before they board a bus in Lucknow, India, to return to their villages on March 30, after the govenment imposed a three-week nationwide lockdown.   © Reuters

The foreigners -- mostly from Indonesia, Malaysia, Thailand, Nepal, Myanmar, Bangladesh, Sri Lanka and Kyrgyzstan -- were among an estimated 2,100 who had been in India for Tablighi activities since Jan. 1. The rest may have left the country before the lockdown was put in place, the ministry said.

Critics say the Tablighi situation has given the Hindu nationalist government opportunity to divert attention from the mass exodus of migrant workers from cities after losing their jobs and homes in the wake of the lockdown, and could be carrying the virus and spreading it elsewhere.

The Tablighi Jamaat's "irresponsible approach has led to the spread of disease and taken attention away from the misery confronted by millions of Indians walking home stranded, hungry, humiliated," tweeted Saba Naqvi, an author and journalist.

"Now the Tablighi Jamaat will become a convenient excuse for some to vilify Muslims everywhere, as if we created & spread COVID around the world," said a tweet by Omar Abdullah, the former chief minister of India's northern state of Jammu and Kashmir. 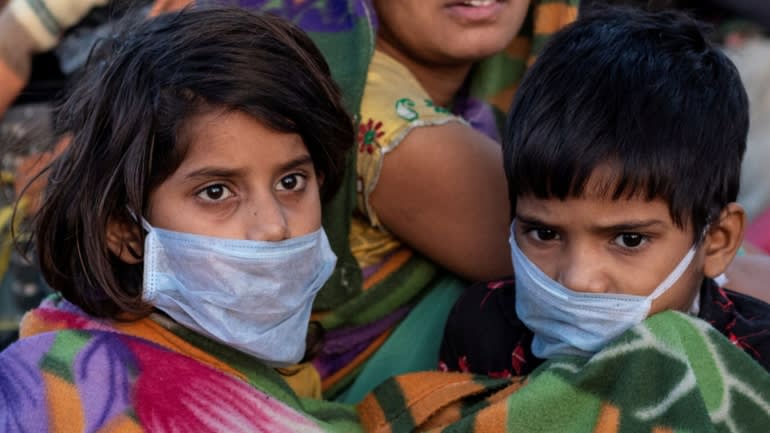 A migrant worker's family rests along a road in New Delhi on March 30 as they return to their village after a nationwide lockdown was imposed to slow the spread of the coronavirus.   © Reuters

Many migrant contruction laborers left on foot for their home towns and villages hundreds of kilometers away after economic activity ground to a halt and public transport was stopped. TV stations showed footage of thousands of workers, some with families and small children, waiting at state borders where they were being held back by authorities trying to contain the spread of the virus.

As criticism of its mishandling of the migrant worker issue mounted, the government stepped up efforts to help them by setting up shelters and providing food. As of Wednesday evening, it said it had established 21,486 relief camps across the country, providing shelter to 675,133 people and meals to 2.5 million.

Separately, the Indian Supreme Court ordered print, electronic and social media to stop the spread of rumors, saying that the migration of laborers "was triggered by panic created by fake news that the lockdown would continue for more than three months," a government statement said on Wednesday.

In a radio address on Sunday, Prime Minister Narendra Modi apologized for taking "tough decisions" that had caused Indians hardship, but added such steps were necessary. "It is a battle between life and death, and we want to win this battle," he said.

Meanwhile, Indian doctors and other frontline health workers continue to face shortages of personal protective equipment -- such as face masks and gloves -- and coronavirus testing kits. Delhi Chief Minister Kejriwal pleaded with the national government to send more supplies to hospitals in the capital.

The shortage is exacerbated by India's reliance on imports for these supplies as demand spikes around the world. As New Delhi tries to procure more supplies from abroad, it has identified a dozen domestic manufacturers and placed orders for 2.6 million PPE kits with them. As of Monday, 334,000 sets of PPE were available in hospitals across the country, according to the health ministry.