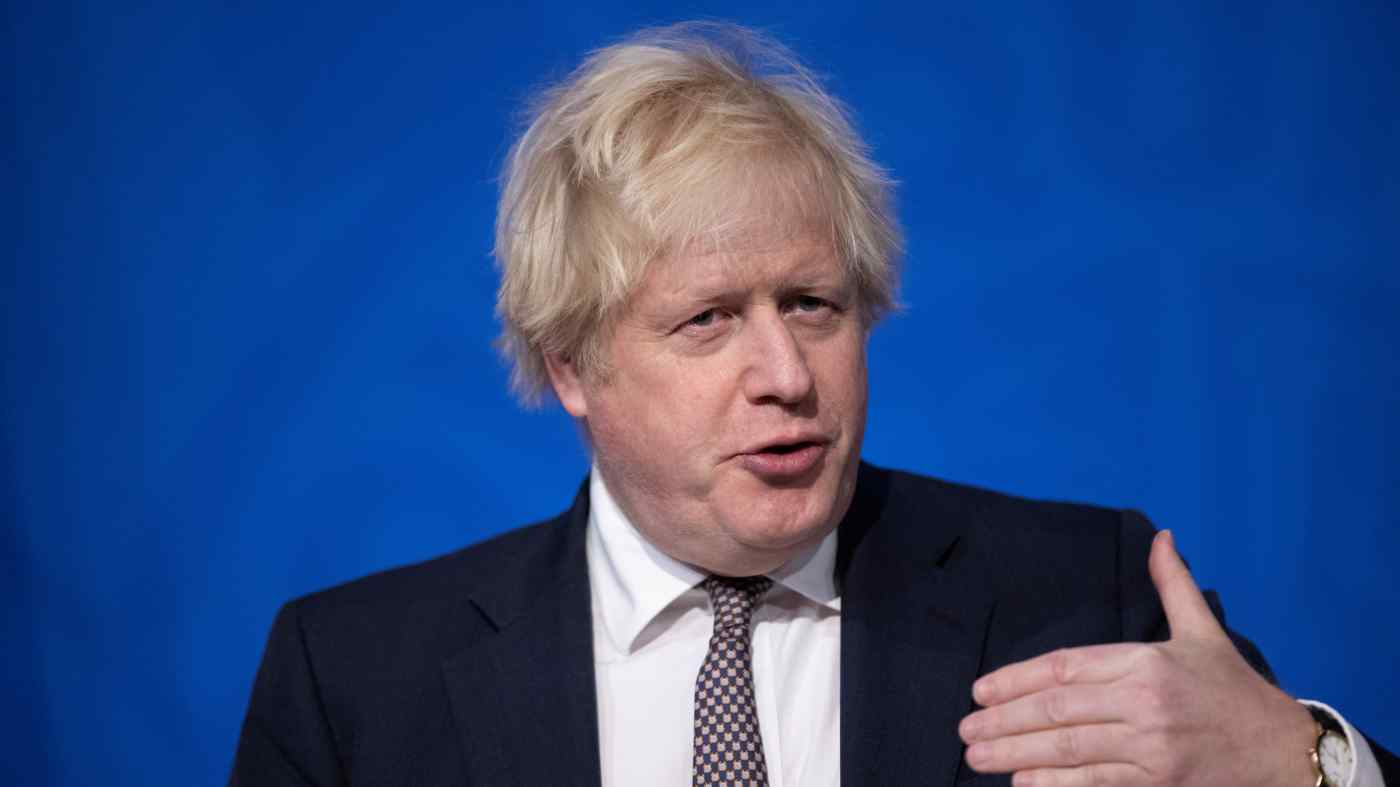 U.K. Prime Minister Boris Johnson faces criticism within his Conservative Party of over measures to curb omicron and an outcry over parties at his Downing Street office during last year's lockdowns.   © Reuters
December 13, 2021 22:43 JST | Europe
CopyCopied

LONDON (Reuters) -- At least one person has died in the United Kingdom after contracting the omicron variant of the coronavirus, Prime Minister Boris Johnson said on Monday, warning that the variant now accounted for 40% of infections in the British capital.

Since the first omicron cases were detected on Nov. 27 in the United Kingdom, Johnson has imposed tougher restrictions and on Sunday he urged people to get booster shots to prevent the health service from being overwhelmed.

Visiting a vaccination center in London, Johnson congratulated those getting shots and handed out stickers before telling reporters that a patient had died from omicron, which he said could overcome those inoculated with two shots.

"Sadly, at least one patient has now been confirmed to have died with omicron," Johnson said. "So I think the idea that this is somehow a milder version of the virus -- I think that's something we need to set on one side -- and just recognize the sheer pace at which it accelerates through the population."

Asked repeatedly if he could rule out tougher restrictions in England before Christmas, Johnson meandered away from giving a direct answer.

Johnson said there was a spike in omicron cases in London, with Health Secretary Sajid Javid saying the variant was spreading at a "phenomenal rate."

Johnson, who is grappling with a rebellion in his party over measures to curb omicron and an outcry over parties at his Downing Street office during last year's lockdowns, said people should rush to get booster vaccines to protect "our freedoms and our way of life."

After COVID-19 was first detected in China in late 2019, he faced criticism for initially resisting lockdowns.

He has also been criticized for overseeing mistakes in transferring patients into care homes, and for building a costly test-and-trace system that failed to stop a deadly second wave.

Johnson has repeatedly said that while mistakes were made, the government was making decisions swiftly in the biggest public health crisis for generations and that his government was quick to roll out vaccines.

As Johnson tries to stem the spread of omicron, he faces growing anger from libertarians in his party over stiffer restrictions and sinking poll ratings.

He has faced criticism over his handling of a sleaze scandal, the awarding of lucrative COVID contracts, the refurbishment of his Downing Street flat and a claim he intervened to ensure pets were evacuated from Kabul during the chaotic Western withdrawal in August.

An Ipsos MORI survey for The London Evening Standard newspaper showed opposition Labor leader Keir Starmer's ranking was 13 percentage points ahead of Johnson, the first time a Labor leader had been viewed as a more capable prime minister since 2008.

It also echoed other polls by showing Labor up three points on 39% ahead of Johnson's Conservatives, who were down one point since the last survey in November on 35%.

Javid said although just 10 people were hospitalized with the omicron variant, its swift spread meant that unless the government acted the health service could be overwhelmed.

At St. Thomas' Hospital Vaccination Center in central London, a queue of hundreds of people snaked back onto Westminster Bridge. Reuters journalists also documented queues across London and in Manchester, northern England.

"The COVID vaccine booking service is currently facing extremely high demand so is operating a queuing system," the National Health Service said on Twitter. "For all others experiencing waits, we would advise trying again later today or tomorrow."