The number of items offered by the Tabete food-sharing service roughly doubled between February and March as more people stay home amid the spread of the coronavirus.
HIROKI OBAYASHI, Nikkei staff writerMay 5, 2020 17:24 JST | Japan
CopyCopied

TOKYO -- With more people staying home to prevent the spread of the new coronavirus, restaurants, grocery stores and farms selling to tourists are all struggling with unsold items.

This presents an opportunity for food-sharing services, which connect customers with sellers, who do not want to see their goods go to waste. For consumers, the services offer not just cheaper prices but a way to cut down on food waste while supporting their favorite shops.

"Thank you for the rescue," said the owner of Fukudora Morishitaten, Japanese-style pastry shop in Tokyo's Koto Ward, on an early-April evening, handing over a customer's purchase. Inside were five dorayaki -- cakes filled with sweet bean paste. The cakes were a day old, but still good. They cost 680 yen ($6.34), 20% to 30% cheaper than their regular price.

The customer, a temp worker, said she often uses Tabete, a food-sharing service that put her in touch with the store. "It's convenient, and it's a good deal," she said.

Tabete ("eat" in Japanese) is offered by Tokyo-based CoCooking. The service, accessible through the web or via a smartphone app, partners with around 620 restaurants, delis and bakeries, most of them in the Tokyo metropolitan area. The service lets its partners sell food that has gone unsold through normal channels but is still good to eat.

Customers select the items they want, pay in advance and then pick up their purchases from the shop. CoCooking calls these purchases "rescues." For the shops, the service generates revenue that would otherwise have been lost and cuts down on waste. It also gives them an opportunity to attract new customers. 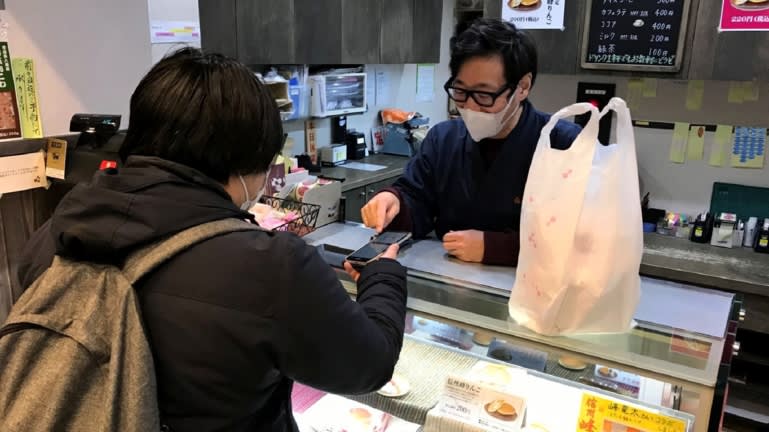 A customer buys "dorayaki" sweet bean cakes at Fukudora Morishitaten in Tokyo. The store signed up for the Tabete food-sharing service last year, which it uses to find buyers for its unsold cakes.

Stores pay a 150 yen fee on the sale of every listed with CoCooking. The number of users registered with Tabete has grown to about 230,000 since the service was launched in the spring of 2018.

The coronavirus outbreak has dealt a heavy blow across the food service industry. Fukudora's sales in March were down more than 40% from the previous year. Customer volume has fallen nearly 20%. March is traditionally the season for farewell parties in Japan, with many employees sent to new departments and students heading off to school in April. But such events have mostly been canceled this year due to the epidemic, so demand for presents such as Fukudora's sweets is down.

The struggles of food sellers in this environment has been a boon to Tabete, with product listings in March roughly doubling versus the previous month. There are more than 60 new stores registered with the service, and it is fielding many inquiries from restaurants that have begun offering takeout service. "We want to support stores that are suffering from a drop in sales and greater food loss," said CoCooking CEO Kazuma Kawagoe.

DayBreak, a Tokyo-based dealer of refrigeration equipment, also resells agricultural products originally marketed to tourists, freezing and delivering fruit that has no buyers due to the coronavirus. At a tourist farm in the city of Nagano, the number of customers who pay to pick strawberries has dropped. Those that aren't picked are frozen and packed, then sold through Amazon. A package of six bags, each containing 100 grams of strawberries, costs 2,000 yen excluding tax and shipping. A portion of the sales is passed on to the grower.

On Kuradashi.jp, Tokyo-based Kuradashi's retail website, consumers can buy pasta and canned goods that are near their expiration date. The website's sales in March doubled compared with February and there were nearly three times more new users. The company donates a portion of its profits to social welfare groups, making the service appealing to ethically minded consumers.

Roughly 6.43 million tons of food is wasted annually in Japan, equivalent to every Japanese person throwing away one bowl of rice worth of food every day. Food sharing's growing popularity may encourage consumers to cut down on the amount of edibles that wind up in the trash.