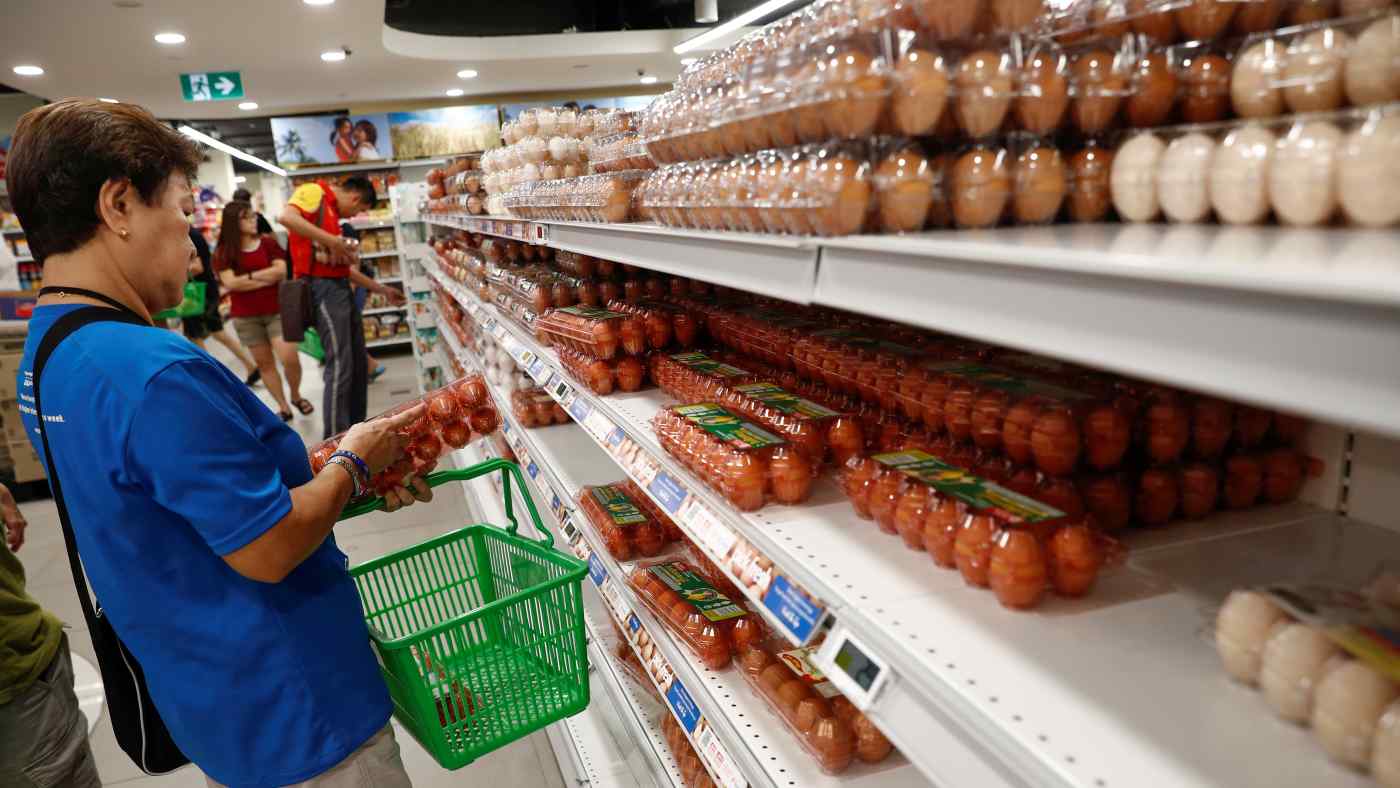 A supermarket in Singapore in mid-March: The city-state's government has repeatedly assured consumers that food will not run out, but that does not mean supplies are immune to disruption.   © Reuters
DYLAN LOH, Nikkei staff writerApril 24, 2020 04:00 JST | Southeast Asia
CopyCopied

SINGAPORE -- The chickens supplied by Toh Thye San Farm have shrunk. They used to weigh in at 2 kg, but now they yield only around 1.3 kg of meat.

The Singaporean outfit simply lacks the manpower to nurture bigger birds, since Malaysia locked itself down to curb the spread of the coronavirus. As workers are unable to cross the border, the food supplier has seen its operating capacity decline by around 30%, according to Kenny Toh, head of projects at the family-run farm.

"When you have not that much workforce, you basically cannot produce as much," Toh said.

The scrawnier chickens are just one example of how Southeast Asian measures to fight the pandemic and protect domestic supplies are affecting the flow of food from farm to table. This is not only a regional issue but a global one, with the United Nations food agency warning this week that the world faces a "hunger pandemic" from the economic impact of the virus -- especially in the poorer countries of the Middle East and Africa.

In Southeast Asia, Malaysia extended its restrictions on public movement by 14 days, to next Tuesday. Thailand also extended a ban on chicken egg exports through the end of this month, from an initial seven days, to address local shortages. Vietnam, the world's third-largest rice supplier after Thailand, temporarily banned exports of the staple on March 24 and continues to restrict them after lifting the prohibition.

Cambodia, too, suspended exports of white and paddy rice. Scattered phases of panic buying have only complicated the region's supply chain challenges.

Singapore, which imports more than 90% of its food, has repeatedly assured the public that it can weather any disruptions thanks to diversified sources and a national stockpile of essentials. Even so, Trade and Industry Minister Chan Chun Sing has warned that more interruptions may be on the horizon as lockdowns in exporting countries drag on.

"When every country starts to shut down their own production system ... actually it reduces the entire global capacity," Chan said in parliament recently, stressing the city-state is working with other countries to keep supply chains running. 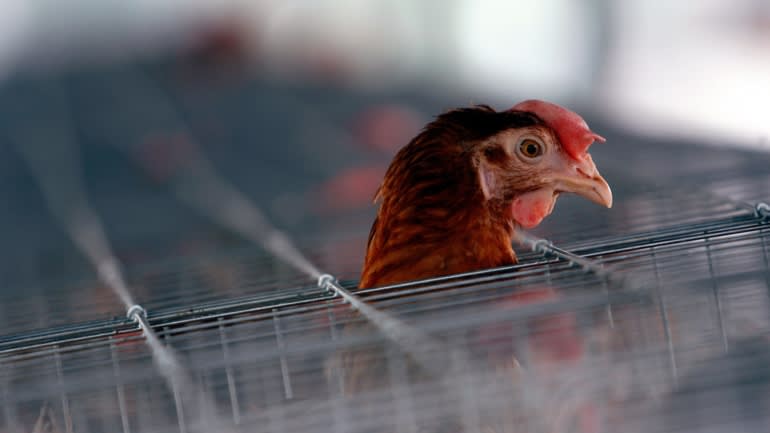 Singapore's poultry industry is among the sectors feeling the impact of coronavirus curbs.   © Reuters

PwC, the global auditing firm, warned in a recent report that the Association of Southeast Asian Nations bloc was facing food security challenges even before the pandemic, due to rapid urbanization and the consumption growth. It said COVID-19 is likely to worsen those difficulties, at least in the short term, for an industry that contributed about $500 billion of economic output, or 17% of ASEAN gross domestic product.

"Our discussions with major global food companies suggest that labor restrictions and supply disruption for inputs are the key challenges that the sector is currently facing in ASEAN," said Richard Skinner, Asia-Pacific deals strategy and operations leader at PwC Singapore.

Likewise, Food Industry Asia and the ASEAN Food and Beverage Alliance, which represent industry players across the region, have raised the alarm over shortages stemming from supply chain disruptions and trade protectionism. "Border closures and higher scrutiny during checks have also inevitably led to disruptions throughout the food value chain -- from the sourcing of raw materials, to the production of goods and transportation of finished products," Matt Kovac, executive director of Food Industry Asia, told the Nikkei Asian Review.

Abdul Halim Saim, president of the ASEAN Food and Beverage Alliance, urged governments not to set up more barriers.

"Now is not the time for countries to disrupt the flow of food, as it would only serve to sow further division and incite panic," he said. "Instead, governments and the industry need to come together to ensure supply chains remain open."

But it is unclear whether such warnings will be heeded. 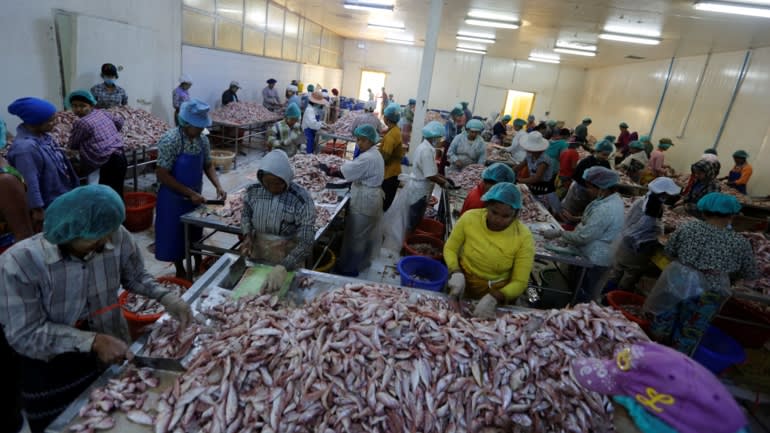 Macro analysis outfit Fitch Solutions cautioned that widespread food protectionism will yield higher food price inflation on staple goods and could result in critical shortages in traditional import markets. Among major grain producers, its report cited India and Myanmar as another two countries that could slam the brakes on exports.

"As Myanmar's government has stated that it will revise export quotas to ensure domestic food security, export quotas in Myanmar could be reduced over the coming weeks," Fitch said.

Food industry players see a risk of a vicious cycle -- one in which supplies cannot reach the market efficiently and consumers resort to knee-jerk hoarding. This would diminish stocks of items that were already teetering on the brink of shortages.

"Any disruptions along the food supply chain, from availability of labor to logistics and transportation, would obviously impact our ability and that of our suppliers," said Onat Bayraktar, vice president for Asia at food packaging company Sealed Air.

Bayraktar said his company was working with its customers to ensure perishable products still reach consumers in good condition despite possible logistical hurdles.

The silver lining for the industry, if there is one, is that the crisis could ultimately lead to stronger supply chains.

Singapore-based Chinatown Food said a number of its suppliers have had to halt work because employees tested positive for COVID-19. Sunny Koh, the company's managing director, said lessons have been learned. "For example," Koh said, "moving forward, we will seek to diversify our sources and suppliers -- instead of relying on a single source."