From Thailand to US, businesses reopen to a strange new normal BANGKOK -- Many shoppers ventured out to the Central World when the capital's shopping mall opened for the first time in two months on Sunday. But they had to first "check in" at the door by using their smartphone to scan QR codes displayed by attendants.

QR code scanning is part of the government's contact tracing platform dubbed Thai Chana, or "Thais Win." Upon scanning the code, customers enter their phone number. When leaving the mall, they scan the code again and enter the time spent on the premises.

If a new infection is reported, the app can help authorities identify the person's route and the individuals potentially exposed.

As many countries slowly begin to reopen their economy, companies and customers are being asked to accept a new normal that often involves cumbersome procedures and rules designed to prevent the spread of the coronavirus while resuming economic activity.

The type of monitoring adopted in Thailand normally would elicit concerns over personal privacy, but the general attitude among citizens has changed.  As of Thursday, roughly 81,000 stores around Thailand have registered with the app, and customers have complied with the contact tracing measures. 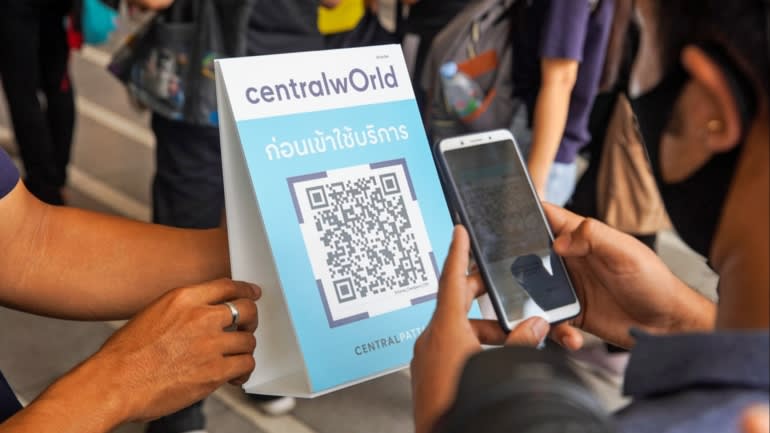 The manufacturing industry is also scrambling to make changes. In Germany, Volkswagen reconfigured its Wolfsburg plant, the automaker's largest production base in Europe, allowing workers to return at the end of April.

Production lines at Wolfsburg have been redesigned to keep workers at least 1.5 meters apart. Passageways once intended to minimize movement of people and cargo have been reshaped to reduce contact, even at the expense of longer distances. During morning meetings, employees stand at markings meant to enforce social distancing.

In the U.S., clothing retailer The Gap plans to reopen 800 outlets nationwide by the end of May, one-third of its chain. But the company will ban clerks from standing near customers. Restrooms and changing rooms will remain closed.

Returned articles will be placed back on the sales floor only after 24 hours have passed. Gap will prioritize health and safety in how it does business during the coming months, CEO Sonia Syngal said.

But such social distancing protocols will likely come at the cost of economic growth.

Louise Sheiner, senior fellow at the Brookings Institution, expects a long spell in which businesses will space out employees, and in which restaurants will allow only a limited number of guests. The lower corporate productivity will hamper gross national product, delaying an economic recovery, she said.

In China's tech hub of Shenzhen, robot servers handle wait-staffing duties at restaurants. Guests retrieve their orders from the trays carried by the automatons. Robots are ordered to return to the kitchen with the push of a button.

Though this setup is meant to reduce human contact, the robots might become a permanent presence, harming employment.

Yet companies are taking these drastic measures because disease prevention has become the primary challenge facing businesses.

The U.S. Centers for Disease Control and Prevention recommends the use of face masks and that employees check their temperature daily. Execution of the rules is left up to the states.

This has left employers liable for enacting safety measures to protect workers. Last month, the family of a Walmart employee who died from the coronavirus sued the discount retailer, citing failure to put in place social distancing protocols.

Germany and China have released guidelines for corporations as well.

"My guess is we'll have more demand for office space, not less, because people will want social distancing," Eric Schmidt, Google's former chairman and CEO, said in an interview earlier this month.

Additional reporting by Shuji Nakayama in New York and Kosei Fukao in Frankfurt.