From light touch to total lockdown: How Asia is fighting coronavirus

Countries begin to toughen their approach as infections continue to rise A man is tested for the coronavirus outside a hospital in Bangkok on Thursday. (Photo by Akira Kodaka)
Nikkei staff writersMarch 28, 2020 14:12 JST | East Asia
CopyCopied

The new coronavirus is affecting Asian countries differently, with governments in each choosing their own remedies to prevent further spread of infections.

Some have employed a light touch, urging people to use common sense and practice social distancing and similar preventive measures. Others have taken a heavy-handed approach, closing borders or ordering lockdowns -- or both.

But as infections increase and show no sign of slowing, the gentle approach has been giving way to draconian steps.

World Health Organization Director-General Tedros Adhanom Ghebreyesus said this week that "asking people to stay at home and shutting down population movement is buying time and reducing the pressure on health systems... but on their own, these measures will not extinguish epidemics."

Following are brief descriptions of how major Asian economies are dealing with the pandemic, listed in order of gross domestic product:

The city of Wuhan, epicenter of the outbreak, was locked down on Jan. 23, with the measure later extended to Hubei Province and surrounding areas. Businesses were shuttered and residents barred from leaving home. The movement of people in and out of the region largely came to a halt and the flow of goods was strictly controlled.

The central government started easing restrictions on Feb. 10, and life now in many parts of the country is slowly returning to normal. Since March 18, people have been able to move more freely in areas of Beijing designated as infection-free.

Efforts to allow migrant workers back into Hubei Province began on March 25, except for Wuhan, which will remain under lockdown until April 8.

Compared with many other nations, Japan has been relatively lax in its efforts to contain the virus. The northern island of Hokkaido, where there were many early infections, declared a state of emergency on Feb. 28, including a nonbinding request for residents to stay home. This was lifted on March 19.

On Feb. 27, Prime Minister Shinzo Abe asked all public schools to close through early April -- a request respected by 99% of schools nationwide. The government has decided not to extend its request. Japan has also banned travel from Iran and many European nations, and is placing visitors from the U.S., China, South Korea, Southeast Asia, the Middle East and Africa under a 14-day quarantine upon entry.

But with more new cases starting to emerge in Tokyo, the city's governor has requested that people refrain from unnecessary outings during weekends and evenings. Meanwhile, the government set up a coronavirus task force on Thursday that paves the way for declaring a national state of emergency should infections spike. 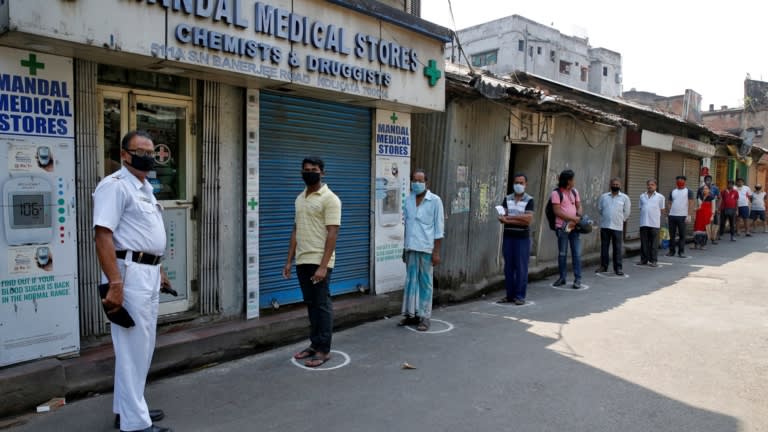 People stand in circles drawn to indicate safe distances while waiting to buy medicine in Kolkata, India during a nationwide lockdown.   © Reuters

Prime Minister Narendra Modi announced in a televised address on Tuesday night that the entire country of 1.3 billion would be locked down for 21 days. This caused panic buying as people rushed to stock up on food and other supplies.

In his address, Modi asked citizens to forget about going out for the next three weeks. He later took to Twitter to urge people stop their panic buying, promising that stores selling essentials would remain open. But some have since closed.

Travel by plane, train, and bus has been suspended. Furthermore, government and private offices apart from those deemed essential -- such as hospitals, telecoms and internet, water, electricity, fire and police -- have been closed, with many employees working from home. Schools, malls and religious sites have also shut down.

The government ordered a "maximum lockdown" for the southern city of Daegu on Feb. 25, where infections that led to a spike in cases were traced to a Christian sect. Officials urged businesses to close and people to stay home. The city has yet to return to normal, and looks almost deserted as people stay inside.

On Sunday, people throughout the country were asked to stay at home as much as possible for 15 days and practice social distancing when going out. Libraries, museums, galleries and other state-run facilities have been shut down. All schools and preschools have been closed since February, although they are scheduled to reopen on April 6. Many large companies told their employees to work from home.

Public transportation is still running though the number of passengers has dropped sharply. Shops and restaurants are open, but some only offer only pickup or delivery services.

Despite the rapid nationwide spread of the coronavirus, the government has so far been reluctant to declare lockdowns, though the president has called for people to "work, study and pray at home."

People are free to travel, and while the transportation ministry has asked that they cancel trips back to hometowns for the Eid al-Fitr holiday at the end of Ramadan, many will likely ignore the request.

Despite the restrained response at the national level, at least nine provincial governments have declared emergencies. Jakarta Gov. Anies Baswedan ordered bars, spas, cinemas and other entertainment venues to be closed from March 23, and public transportation is limited.

Workers are also being told to work from home, meaning shopping malls in the capital are closing earlier than usual, and there are visibly fewer cars on the streets. 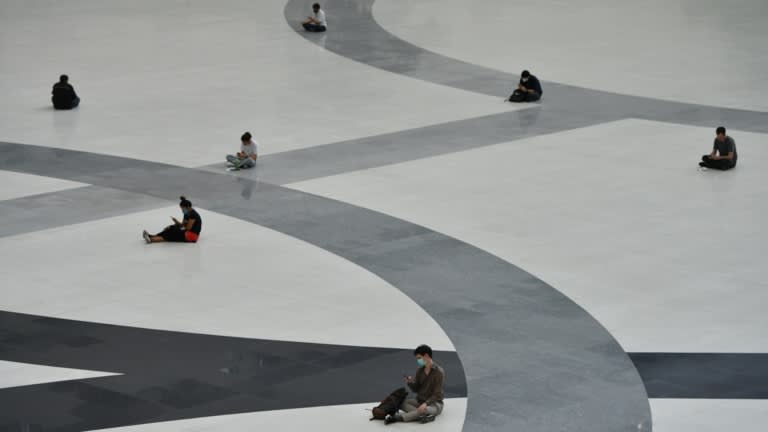 People practice social distancing as they queue at the immigration center in Bangkok on Wednesday.

Taiwan has yet to impose any strict lockdowns, though the government said the coming weeks are critical as cases continue to rise.

Foreigners have been barred from entering Taiwan since March 19, and all returning Taiwanese nationals have to self-isolate for 14 days. Persons violating this rule may be fined up to 1 million New Taiwan dollars ($33,055).

More than 46,000 people are still under quarantine or self-isolation. Taiwan's Central Epidemic Command Center has asked people to practice social distancing, and indoor events of more than 100 people and outdoor events over 500 have been banned.

Prime Minister Prayuth Chan-ocha has declared a state of emergency, effective from March 26 to April 30, and has closed all borders. Thais returning from abroad can enter the country if they have medical certificates showing they are not infected.

Governors of the capital and provinces are authorized to close down at-risk locations and events, including stadiums, pubs, entertainment complexes, theaters, massage parlors, spas and fitness centers.

Hong Kong barred foreign visitors, including transit passengers, from entering the city for 14 days starting from Tuesday at midnight, as the number of imported cases surged over the past week. Arrivals from Europe and the U.S. will be required to submit saliva samples for testing even if they do not show symptoms.

Those arriving from mainland China, Macao and Taiwan will be put under a 14-day mandatory home quarantine with their whereabouts monitored by a tracking wristband. Previously, the city had closed eight out of its 11 border crossings with mainland China, and suspended new tourist visas to mainland travelers.

Schools and public facilities, including libraries, museums and sports centers, have been closed since January. But trains, buses and ferries are still running. Most retail shops and restaurants remain open, though some have reduced their hours. Civil servants started working remotely again from last week and most companies allow employees to work from home. Chief Executive Carrie Lam on Friday announced a ban on public gatherings of more than four people, and has requested that bars, cafes and restaurants separate tables by at least 1.5 meters, with each table having a maximum of four seats. People were banned from partying under the cherry blossoms in Tokyo's Ueno Park this year as a safety precaution against the coronavirus. (Photo by Yuki Kohara)

Malaysia has been under lockdown since March 18 with almost all public and private offices closed. The lockdown has been extended through April 14. Only essential services are permitted, and all schools and universities remain closed.

Malaysians are barred from leaving the country and no visitors can enter. This is causing problems with Singapore, which relies heavily on Malaysians commuting to the island daily for work.

Small crowds are still seen in supermarkets, as each family is permitted one person to go out to obtain groceries and other supplies. The police and the army have set up roadblocks throughout the nation to prevent people from leisure driving.

Officials have not ruled out a lockdown, but have emphasized that it is a last resort. The country's focus has been on stemming the flow of infected foreigners into the city-state and preventing large gatherings.

Borders have been closed to tourists and short-term visitors, and Singaporeans residing overseas are being encouraged to return home. From Friday, all bars and entertainment venues, including nightclubs, discos, cinemas, theaters and karaoke bars were closed until the end of April.

Malls and museums may remain open, but operators must ensure venues do not hold more than one person per 16 sq. meters of space. All religious services have been suspended, with places of worship open only for private prayers and essential rites for small groups.

The country's main island of Luzon -- home to 57 million people and Manila -- is on lockdown from March 16 to April 12. Under "enhanced community quarantine," each household must designate a family member who will bear a "home quarantine pass" that allows them to go out to buy food and medicine.

Local governments have started distributing food packages to poor households, and some wealthy cities have handed out medicines, vitamins and contraceptives such as pills and condoms. People in stores must maintain a 1-meter distance, with restaurants only permitted to sell takeouts.

Mass gatherings are prohibited, forcing churches to stream religious services via Facebook. Public transportation has nearly ground to a halt, while nonessential businesses are closed or under work-from-home arrangements. Some people exempted from the quarantine, such as medical workers and staff in food establishments, are ferried to and from work in vehicles arranged by their companies or local governments.