12 main types of the novel coronavirus have been identified 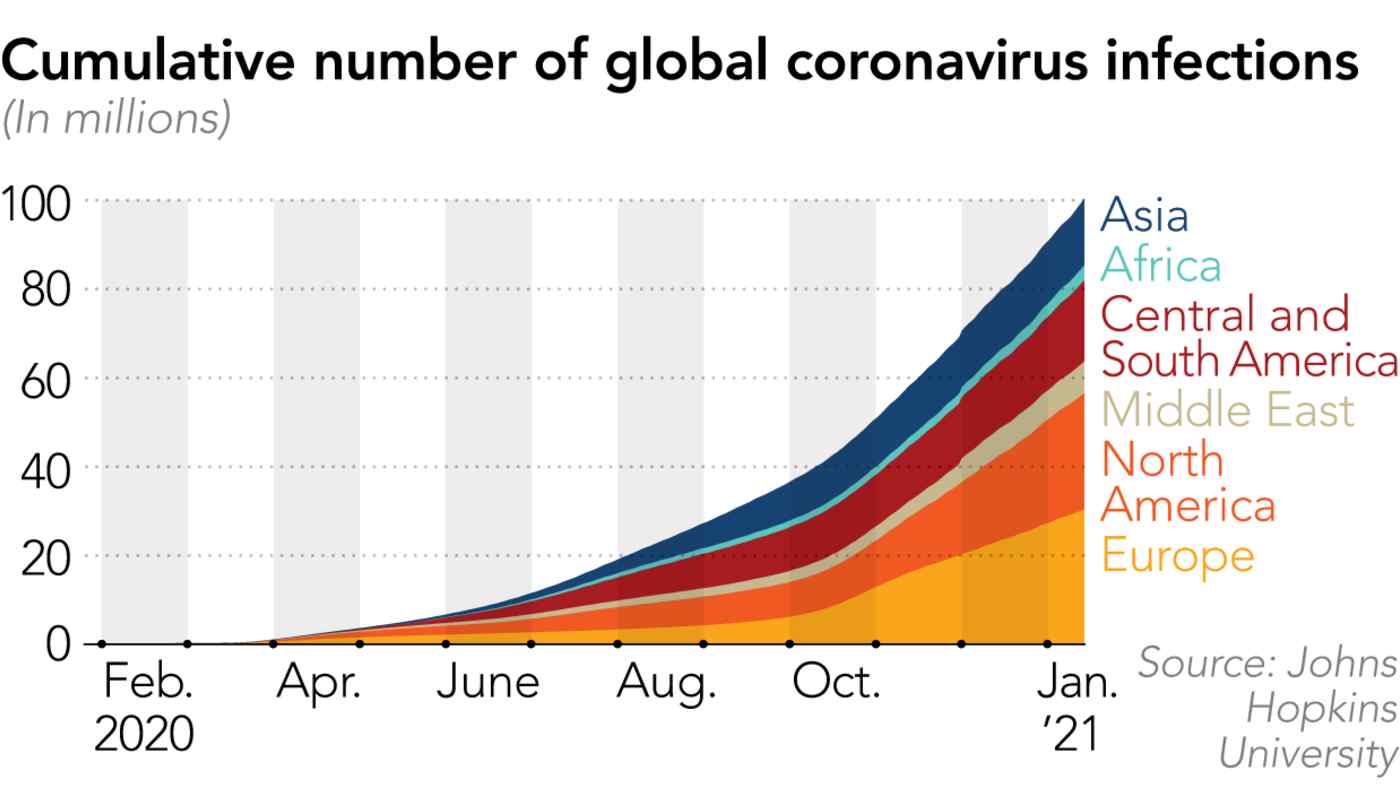 TOKYO -- The coronavirus pandemic has reached another grim milestone, infecting more than 100 million people worldwide -- or roughly 1.3% of the global population -- since the virus was first identified in Wuhan, China, in late 2019.

The news comes with the pandemic death toll at 2.15 million people as of Wednesday, Japan time, according to data compiled by Johns Hopkins University.

The virus has changed as it has spread around the world, and recently the existence of mutated variants has been confirmed in the U.K., South Africa and elsewhere. While vaccination drives have begun in several countries to stem the tide of the pandemic, the threat of a constantly mutating virus looms large.

Infections worldwide have doubled in the two-and-a-half months since November 2020, when it crossed the 50,000 threshold. With the onset of winter, cases since November have increased 2.4 times in North America, and 2.3 times in Europe.

With 10 million new infections every two weeks, the pandemic shows no signs of slowing.

Virologists around the world have tracked the mutations of the new coronavirus. The relationships among the main variants discovered so far can be mapped out with a tree diagram.

According to classifications by Nextstrain, a project that analyzes the genetic material of viruses, there are 12 main types of the novel coronavirus. Viruses cannot reproduce on their own, so they enter human cells to replicate themselves and multiply. The new coronavirus has a type of genetic information called RNA (ribonucleic acid), and mutations occur when there are mistakes in copying this genetic material. On average the coronavirus mutates once every 15 days. Many mutated strains simply die out, but some become versions of the virus that can then infect people.

In the mutated strains found in the U.K. and South Africa, multiple spike proteins -- protrusions on the surface of the virus -- are located in different places than in the case of the original. The spikes attach to proteins on the surface of human cells and enable the virus to enter. Mutations can increase infectivity and the risk of serious illness. There are also concerns that vaccines and antiviral drugs may not be effective against them.

A strain called 19A was discovered in Wuhan at the end of 2019, and it soon mutated into a strain called 19B. Both of these grew to become the pandemic in Asia. 20A, which spread to the world in spring 2020 from Italy and other parts of Europe, is derived from 19A.

After that, 20B branched off from 20A and spread from Europe to the rest of the world. Similarly, 20C, also derived from 20A, traveled around the world from May, and became particularly prominent in North America. Countries locked down cities in response, but they were unable to contain the spread.

Outbreaks of 20B and 20D occurred in summer 2020 in Brazil and other parts of South America, as well as in the southern part of Africa. Around the same time, 20E, a branch of 20A, was confirmed in Europe, and 20F, which was derived from 20B, was discovered in many parts of Australia. Around September, 20G, derived from 20C, spread in the U.S.

Toward the end of 2020, a series of mutated strains with characteristics different from the original virus were identified. The "U.K. variant," 20I, branched off from 20B and was first identified in October. In December, 20H, a mutated strain of 20C, was identified as the "South Africa variant." 20J, a strain that originated in Brazil, has been found in Japan and other countries.

New infections are spreading once again in countries where mutated strains have been confirmed, and conditions are growing worse. Around late November, authorities in the U.K. investigated a rapid spread of infections in the southeastern part of the country, and a new variant was confirmed. Subsequently, related clusters from London spread to the rest of the country. In December, the variant accounted for two-thirds of the country's cases.

The new strain is thought to be 70% more infectious than previous versions, according to the British government. With infections from the variant increasing rapidly, London was put under lockdown for the third time this month. The number of new infections (7-day moving average) rose to about 60,000 people early this month. In December, the South African Department of Health announced for the first time that a mutated strain had been detected in the country. Judging by sample surveys, it is thought to have emerged at the start of October.

Between summer last year and October, new infections per day in South Africa had been less than 2,000, but they have been rising rapidly since mid-November. This month, there were about 16,000 new infections per day (7-day moving average), more than at the peak of last summer's wave (12,000 people). According to the Health Department, the variant accounts for 80% to 90% of new infections in the country. A variant that originated in Brazil was detected for the first time in Japan this month. Another variant of Brazilian origin, different from the one discovered in Japan, was found in the U.K.

The variant found in Japan was detected in an infected person who traveled from the state of Amazonas, in northern Brazil. Infections in the state capital, Manaus, have been rapidly worsening since the start of the year, and some are worried the medical system will be overwhelmed.

New infections have been rising since early November, and in December there were more cases than during the peak of last summer's wave. The growing number of variants may be contributing to the increase in cases, which currently stand at about 55,000 new infections per day (7-day moving average).

The variants are spreading geographically as infected people cross borders. The U.K. variant is raging mainly in Europe. Based on the GISAID data-sharing platform for virus researchers, European countries stand out as having the highest percentage of strains.

In the U.K., variants accounted for more than 70% of the newly registered data in the past four weeks. In Spain and Portugal, where new infections are rapidly increasing, the level is also high. The British variant has been confirmed in about 60 countries and regions, and is spreading not only in Europe but also in Asia and Latin America.

The South African variant has been found in about 30 countries and regions. It has been widely identified in Europe as well as in Africa. In countries where virus research facilities are not well developed, available data may be small, making it difficult to ascertain the actual situation.