After more than 120 days since a stringent lockdown was imposed on May 31, authorities had said on Thursday that the southern city would "gradually" reopen at 12:01 a.m. Friday.

Thousands of young migrant workers who lost their jobs during the lockdown waited at checkpoints on motorbikes before midnight Thursday to leave the city once the lockdown was lifted. The harsh curbs required workers to sleep in factories or designated lodgings for the past four months and left many without work, forcing some to live off their savings.

Starting Friday, factories in industrial parks, export processing zones and high-tech parks were given the green light to resume operations. But the relaxed restrictions come with conditions, including that everyone must be fully vaccinated.

The city's decision to ease the restrictions came after Hanoi announced on Wednesday that Vietnam's economy in the July-September quarter shrank 6.17% year-on-year. The strict "stay-where-you are" orders during the lockdown in Ho Chi Minh City, home to 9 million people, contributed to the country's first contraction in domestic product since 2000 on a quarterly basis.

Authorities said the restrictions were being loosened in the city because the number of severe COVID-19 cases and deaths had fallen, while the situation at previously overwhelmed hospitals had improved as more people were discharged. Ho Chi Minh City recorded 4,372 new COVID-19 cases on Thursday. Cumulative deaths reached 14,718, accounting for 76% of the toll in the entire country. 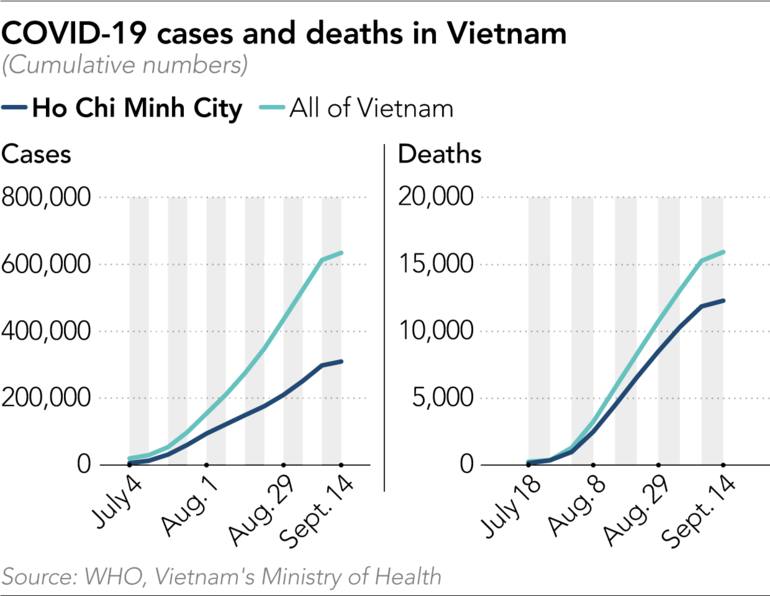 Bracing for the exodus, Le Hoa Binh, vice chairman of the Ho Chi Minh City People's Committee, at a news conference on Thursday, urged migrant workers to remain in the city, "People who stay will be put on the priority list for vaccination and be instructed on finding jobs," adding, "Factory and construction work is going to resume, and these sectors are lacking laborers."

But the vice chairman's message failed to stop many workers from leaving the city.

Ho Chi Minh City on Friday proposed a plan to bring back workers who left for other provinces so that they would be able to work in the factories when they start up again.

Tran Tuyen and his family of four had packed up everything, ready to return to his highland hometown of Lam Dong. "We will leave the city immediately if those restrictions are lifted. We lost all the savings we've got after working in the city for years," Tuyen told Nikkei Asia.

Foreign businesses are not encouraged by the easing of restrictions, as concerns over worker shortages are growing. "Supply chains can't be restored overnight," said Mary Tarnowka, executive director of the American Chamber of Commerce Vietnam, said Thursday. Factories in Ho Chi Minh City had heavily relied on migrant workers from the countryside, many of whom left during the lockdown. "Companies will have to wait to [fully] recover skilled human resources until the second quarter of 2022," said Hanoi-based Economist Le Dang Doanh.

Phan Thi Thao, 27, who worked at a textile company, left Ho Chi Minh City in August and rode her motorbike back to her hometown in Nghe An, more than 1,000 km away. "I am helping with my family's work in the fields. I will consider coming back to the city after the Tet holiday," Thao said. Tet falls around the end of January.

In an American Chamber of Commerce survey conducted in late August, 13% of the members said they had ceased operations or were operating with minimal staff, while nearly 50% said they were operating at 50% capacity or less. The chamber has pushed for "interprovincial coordination," saying that conflicting policies impede the flow of goods and people, and need to be addressed, Tarnowka said, since many workers in Vietnam live in one province and work in another.

Others echoed her view.

"We should be cautiously optimistic with the news about the reopening, [but] many factories will still struggle to meet the requirements to resume production. While the leaders mention relaxed measures, there are hurdles to the reopening," said Ho Quoc Tuan, a finance and accounting lecturer at the University of Bristol in the U.K.

Labor shortages are a shared problem among foreign businesses in Vietnam seeking to bounce back from the pandemic-induced slump.

"One of the most pressing issues is the need for electronic 'vaccination passports' to ease the free movement of vaccinated people, both within and into Vietnam. There should be a fast-track process for returning foreign business leaders, experts and their families," Alain Cany, chairman of the European Chamber of Commerce, told Prime Minister Pham Minh Chinh at a meeting last month. Vietnam as a whole intends to adjust its hard-line COVID-19 response and learn to live with the virus while allowing its economy to function again. Authorities were praised for their relatively effective handling of the pandemic early on, but have struggled since the current wave hit in April.

"The pandemic has posed a great challenge for Vietnam's governance system, revealing strength and weakness," Doanh said. "Successful achievement in pandemic response in 2020 has been followed by unpreparedness of vaccines this year."

The decline in GDP in the third quarter underscored the country's sharp turn from a pandemic success story to a hard-hit victim. The annual growth target of 6.5% set by Hanoi earlier this year now looks out of reach.

"Vietnam's GDP growth will be around 2.6% to 3.0% if in the fourth quarter the epidemic is controlled, the lockdown is lifted and relief packages reach the people, and credit to support businesses is disbursed," Doanh said.