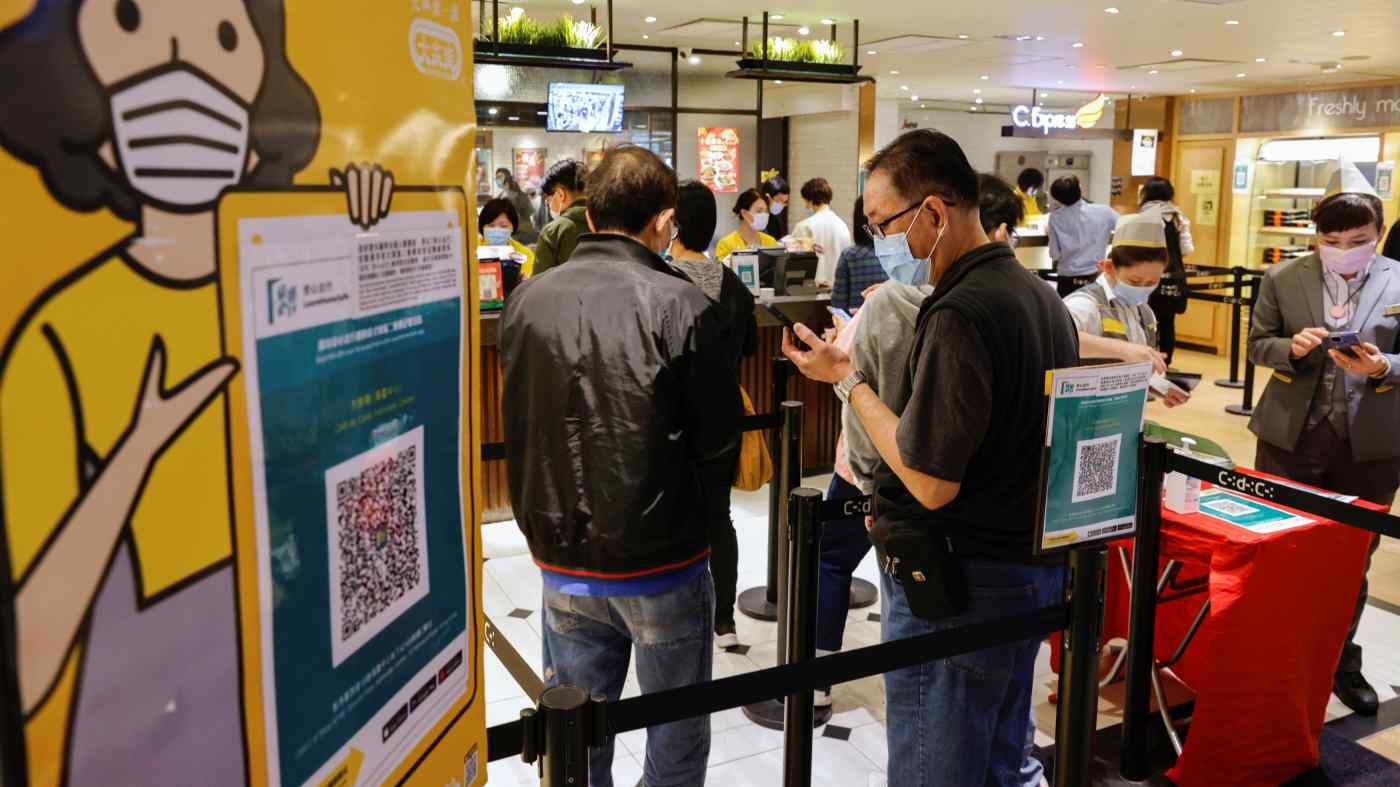 Many in Hong Kong are leery of the government's LeaveHomeSafe contact tracing app, both because of heightened distrust in their own government and because of Singapore's experience.   © Reuters
MICHELLE CHAN, Nikkei staff writerFebruary 23, 2021 13:03 JST | Hong Kong
CopyCopied

In allowing cinemas, gyms and other businesses to reopen last week and restaurants to offer dinner service, the government made it mandatory for residents to "check in" at entry by scanning a QR code with an official app called "LeaveHomeSafe" or by providing their contact details directly to the business.

The idea is that when a person tests positive for COVID-19, the app, or business, will notify anyone else who may have been present around the same time at any given location.

Government officials insist the visitation data normally stays only with the user's phone.

In a statement on Friday, a spokesman for the Innovation and Technology Bureau said the "app does not have a tracking function, and venue check-in data will not be uploaded or transferred to the government or any other systems. Such data are saved on users' mobile phones only."

The statement added: "Matching of users' check-in data and the issuing of health alerts will only be carried out within the app."

According to the app's personal information collection statement, however, the app will share visitation data related to confirmed COVID cases with the Health Department where it could be retained for at least seven years while other data could be shared or retained by other authorized departments and organizations "when necessary."

Many in Hong Kong are leery, both because of heightened distrust in their own government and because of Singapore's experience.

While the government there initially said data from its "TraceTogether" system would be used only for COVID-19 contact tracing, officials later admitted police could obtain access. Amid an outcry, the Singapore government introduced a bill in parliament to restrict use of system data for specified serious criminal offenses. 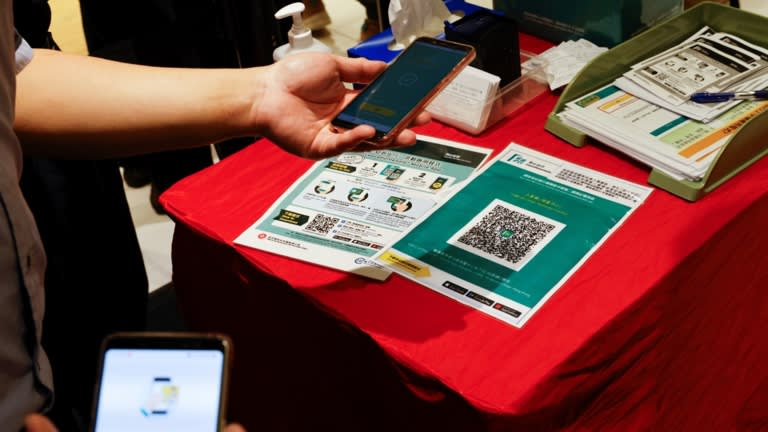 Some Hong Kong residents have been using fake versions of the LeaveHomeSafe app to avoid sharing information on their daily activities with the government.    © Reuters

"You never know what the authorities would do with this data," said a Hong Kong university student who gave his name only as Jeffrey. He has been using a fake version of the LeaveHomeSafe app to scan QR codes at restaurants and his gym.

"It looks just the same and no one could tell," he said. "I feel safer knowing that the government will not have access to anything on my phone."

While fake apps are not available in the official Apple or Google Android app stores, download links have been widely shared on social media. At least three fake apps were circulating on the internet as of Tuesday. It is unclear how many people have downloaded or used them.

"The creation of this cloned app is for research purposes only: We encourage the public to use the official app," one user on LIHKG, a Reddit-like local online forum, wrote as he posted a download link to a fake app.

The real app was downloaded over 2.5 million times through Feb. 21 in the city of 7.47 million, according to the government. Officials a day before warned about cybersecurity risks from using apps of doubtful origins and the potential legal consequences of using false documentation.

"The situation of fraudulent LeaveHomeSafe mobile app is running rampant... [The government] has referred all suspected fraudulent websites and mobile apps to the police for follow up," said the Office of the Government Chief Information Officer.

Trust in the Hong Kong government and police has fallen steeply since anti-government protests in 2019, particularly after enactment last June of a sweeping national security law penalizing secession, subversion and collusion with foreign forces.

According to a monthly survey by the Hong Kong Public Opinion Research Institute, respondents expressing distrust in the government in January outnumbered those affirming trust 50.7% to 28.1%.

"If the 2019 protests taught me anything, it is that the government will abuse its power whenever it can," Jeffrey said.

The Hospital Authority Employee Alliance, a labor union formed by public hospital staff, has called on the public to boycott the official app, warning that the authorities are simply seeking to stealthily acquire more personal data.

"The contact-tracing app is used for surveillance, not coronavirus control... The government wants us to get used to living in an authoritarian society without privacy and basic rights," the group wrote on its Facebook page.

The Hospital Authority responded by "strongly refuting the false information" from the group and calling on it to not mislead the public.

But discomfort with the government's approach is widespread.

"The government did not make it transparent how it will handle the data," said Wong Ho-wa, a data scientist with a local fashion retail group and who also is a journalism lecturer at Hong Kong Baptist University and serves on the committee that elects the city's leader.

"There are plenty of ways to conduct contact tracing. For example, Google and Apple are offering exposure notifications in several countries where Bluetooth [technology] is used to detect high-risk cases anonymously," he said.

Some residents simply avoid the app in favor of giving their contact details to businesses they visit, typically by filling out a slip of paper.

"I only give out my surname and phone number... information that you would normally give when you make a reservation, but no more than that," said a Hong Kong marketing executive, who is wary of the risks of fake apps and identified herself only as Wong.

"It is the safest legal way I can think of to protect my privacy," she added, acknowledging that it could make COVID contract tracing less efficient.

Others, though, put down fake names or phone numbers or even put blank forms in the collection boxes. Businesses that fail to enforce the data gathering requirements can be forced to suspend operations for up to 14 days.

Meanwhile, demand for old-model smartphones has spiked as people rush to purchase a spare to run the contact-tracing app, according to local media reports.

Other businesses, which voiced opposition to the new policy, have even refused to resume normal operations to avoid having to gather so much information, including at least 30 restaurants, according to local news reports.