HONG KONG -- In 2003, Ken Chan Kai-yuen was two days away from taking a university entrance exam when he came down with a fever and diarrhea.

He spent the next six weeks in a Hong Kong hospital, recovering from SARS.

Seventeen years later, Chan and others who lived through the deadly outbreak of Severe Acute Respiratory Syndrome are determined to stop the new coronavirus that now threatens the city -- even as the local government's response draws mixed reviews from a mistrustful public.

"We remember SARS," Chan, now 37, said through a face mask. "We have learned the lesson and we have been taking further precautions."

Chan was -- and still is -- a resident of Amoy Gardens, a towering residential complex in Kowloon that became a major SARS hot spot. More than 300 residents were infected and 42 died, out of the 1,700 cases and 299 deaths recorded in the city. Defective piping allowed the airborne virus to spread from unit to unit.

"Amoy Gardens was like a dead city," Chan recalled. "No one dared to come close to the area. Even taxis would not stop near the estate."

Though Chan survived, he remembers the coughs of other patients in the hospital and the faces of some who did not make it home.

This time, his goal is to ensure the complex does not report a single case of COVID-19. His strategy is threefold: At home, where he lives with his wife and newborn daughter, he insists on proper hygiene to stay virus-free. As an owners representative in his building, he urges management to sterilize the elevator buttons and lobby. And on the community level, he is an active member of a residents group that distributes masks and alcohol sanitizers, while reminding tenants to check their pipes. 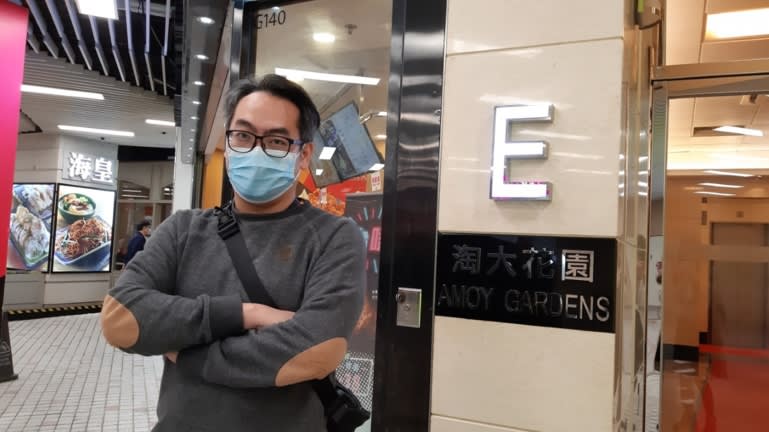 Amoy Gardens resident Ken Chan said that during the SARS crisis, the residential complex was "like a dead city." (Photo by Stella Wong)

"Even if there is only one case in Amoy Gardens, it will go to the news headlines," Chan said.

David Hui Shu-Cheong, a doctor regarded as one of the heroes of the 2003 outbreak, thinks the Amoy Gardens disaster was a "very rare" confluence of problems that is unlikely to be repeated. So far, he said, Hong Kong's coronavirus containment measures have been "successful," compared with Asian neighbors.

Indeed, as of Thursday, the city had recorded 208 infections. This was fewer than Japan and Singapore despite Hong Kong's proximity to the outbreak's original epicenter in mainland China -- though a sudden single-day spike of 25 on Wednesday raised fresh concerns.

Hui -- who was on the front lines of the SARS battle at Prince of Wales Hospital, where 114 medical personnel were infected -- said Hong Kong was better prepared this time. "In 2003, we did not have isolation wards with negative pressure facilities," he said. "The beds in the general ward were relatively close to each other. But now, we have 1,400 beds with such facilities."

He also credits Beijing with sharing more information about the new coronavirus than it did right after SARS emerged on the mainland in November 2002. China's release of the virus genome about a month into the current outbreak, for example, allowed others to develop tests.

Now a professor of respiratory medicine at the Chinese University of Hong Kong and an adviser to the city government on the new coronavirus, Hui urges precautions but not panic. Dr. David Hui was on the front lines of the fight against SARS and now advises the government on the new coronavirus. (Courtesy of Chinese University of Hong Kong)

Many of the Hong Kong authorities' precautions have focused on reducing social contact. All schools have been closed at least until mid-April. Civil servants were ordered to work from home for weeks.

On Thursday, the city imposed a 14-day quarantine on travelers arriving from everywhere except Macao and Taiwan. Meanwhile, health officials are using a patient numbering system to trace close contacts and isolate potential cases.

But in a politically divided city that was rocked by months of protests before the outbreak struck, many are dissatisfied with authorities' handling of the crisis. Chief Executive Carrie Lam's approval rating hit a historic low of 9% in early March.

Alex Lam Chi-yau, another former SARS patient, accused the government of failing to fully learn the painful lessons from 2002 and 2003.

He is the chairman of the Hong Kong SARS Mutual Help Association, which helps survivors heal their mental wounds and reintegrate into society. In the current outbreak, he noted that the Carrie Lam administration had initially resisted widespread calls to seal off the city from the mainland, calling the idea "discriminatory." She only closed some checkpoints after medical personnel staged an unprecedented strike.

Alex Lam said it seems the chief executive second-guesses every measure based on what Beijing might think, despite Carrie Lam's repeated assurances that all her decisions are "based on scientific facts" and "for the interest of the Hong Kong people."

"I can't see that the government is doing its best to safeguard citizens' health," Alex Lam said. "We were united during the SARS outbreak. But today, Hong Kong is divided because of one person."

At the same time, he questions whether Carrie Lam's administration is up to the challenge of soothing anxious citizens and reinvigorating the economy after the pandemic.

Hui said medical professionals, too, lack the sense of togetherness they had during SARS. "Although many colleagues were sick during SARS, others were very willing to join the dirty team," he said. "The atmosphere was good, as we were all united as one. But this time we are not as united as before."

He said the hospital strike hinted at deeper issues the government will have to address, including insufficient manpower and heavy workloads on top of the social unrest in the past months.

Amid the uncertainty, some citizens have taken matters into their own hands. Like Ken Chan's group at Amoy Gardens, dozens of businesses and organizations have handed out masks and disinfectant to those in need, while others have set up factories to produce masks locally.

Chan said that while neighboring Macao and Taiwan set up mask rationing programs, Hong Kong has failed to provide protection for its elderly population. Even Carrie Lam, who insists the city is doing its best to obtain mask supplies, admitted that her government's import drive was failing to secure them fast enough.

"That is the moment we realize that we cannot ask the government for help in anything," Chan said.

Nevertheless, he believes Hong Kongers' "Lion Rock Spirit" will prevail. "Even though the government has not been reacting fast enough, we, as Hong Kong people, react fast to protect ourselves."

Alex Lam, the former patient, warned against downplaying the virus, noting some citizens in Western countries still refuse to wear masks and believe it is "nothing more than a flu."

"We hope to tell the world from our experience in 2003: please take every effective precaution against the virus. Never underestimate the consequences."

He also appealed to Carrie Lam to listen to residents and bring the city "out of the darkness."

"Too many things have happened in Hong Kong in the past few months," he said. "I really hope we can take off our masks and take a break."