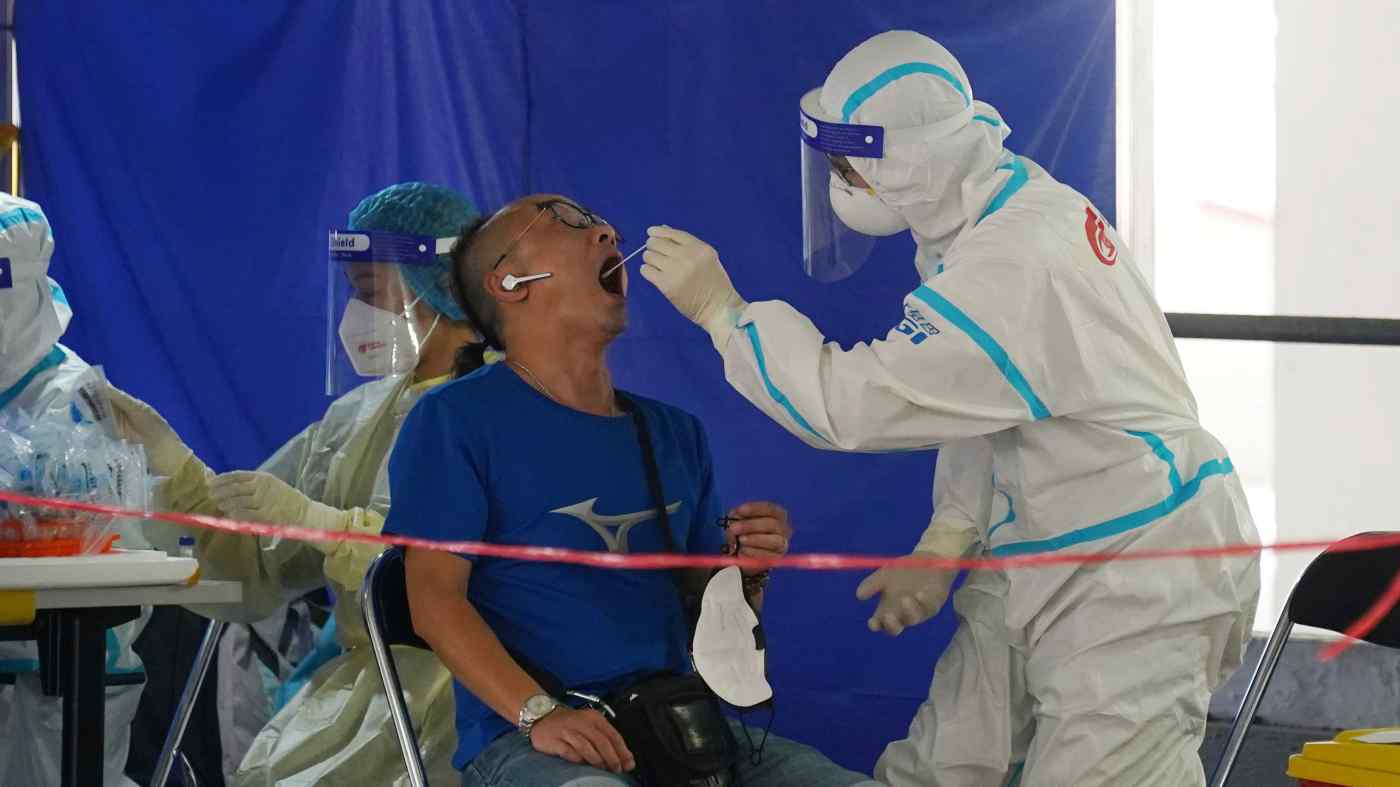 A medical worker in a protective suit collects a swab from a man in Hong Kong to test for COVID-19.   © Reuters
MICHELLE CHAN, Nikkei staff writerAugust 31, 2020 15:05 JST | Hong Kong
CopyCopied

HONG KONG -- With Hong Kong set to embark on a groundbreaking citywide coronavirus test to eradicate COVID-19 transmission in the city, medical experts say turnout will be key to the effectiveness of the scheme, which has raised concerns over the handling of citizens' DNA data.

The seven-day testing plan, scheduled to start on Tuesday, will allow the city of 7.5 million residents to conduct up to half a million coronavirus tests a day. Over a hundred testing centers will temporarily be set up across the territory, with the help of hundreds of medical and lab professionals from mainland China.

Citizens can sign up for the test online on a voluntary basis, unlike the mandatory universal tests that have taken place in other Chinese cities. The Hong Kong government has hailed the exercise as a "blessing from the central government" as the equipment and funding for the tests were largely provided by Beijing.

The government hopes that 3 million residents turn up for the test, in a bid to identify all asymptomatic carriers of the virus. As of Monday morning, about 480,000 people had registered for the test.

"The more people turn up, the more tests we do, the more effective the scheme will be," David Hui, a medical professor at the Chinese University of Hong Kong, told the Nikkei Asian Review. Hong Kong Chief Executive Carrie Lam attends a news conference on Aug. 21. She has lashed out at critics of the testing scheme, suggesting that they are "politically motivated."   © Reuters

"Ideally, it can help to unearth hidden patients and curb virus transmission chains in the densely populated city," Hui said, adding that about 30% to 40% of coronavirus infections these days have untraceable sources.

Yet the testing plan has also triggered public distrust as Beijing further tightens its grip over the former British colony after a year of raging anti-government protests. Activists and opposition lawmakers in the city have called for a boycott of the mass testing, out of fear that mainland authorities will gain access to citizens' DNA data.

Joshua Wong, a prominent pro-democracy activist, has called on all citizens in Hong Kong to boycott the mass testing scheme, and urged people to conduct tests in private clinics instead. "Participating in the scheme would only facilitate government surveillance," he said.

The local government has repeatedly rejected that claim, maintaining that all genetic data will be stored within the city and will not be used for purposes other than coronavirus tracing.

The city's leader, Carrie Lam, has lashed out at critics of the testing scheme, suggesting that they are "politically motivated" and "conspiring to smear the local and Beijing governments." She said that "it's a civic responsibility for all citizens to take part."

State-run media have also blasted naysayers of the tests.

"Those who slander the Beijing government and hamper the virus control are traitors of all Hong Kong citizens," the state-run People's Daily newspaper wrote in a commentary last week. "The testing plan reflects Beijing's generous support and care towards Hong Kong." 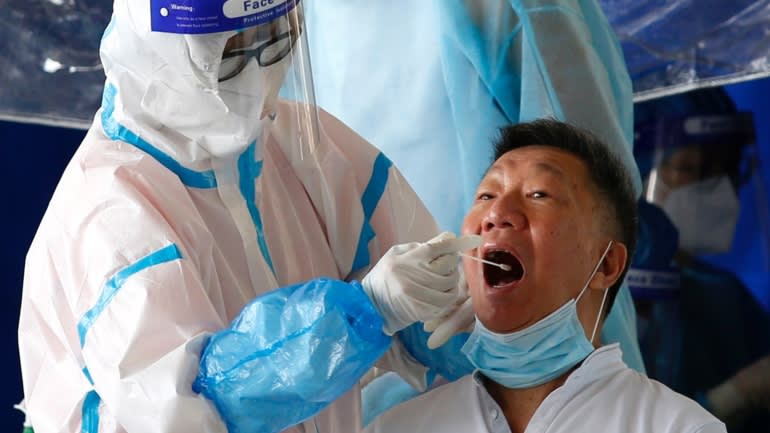 A swab sample is collected from a taxi driver at a testing site in Hong Kong. More than three-quarters of respondents to a recent survey oppose the introduction of a COVID-19 "health code."   © Reuters

But not everyone in the city is convinced.

"I certainly will not go for the test," said a 53-year-old housewife in Hong Kong. "You never know where your data will end up."

"It's natural that everyone is doubtful about all Beijing-backed projects these days," said a 35-year-old banker. "I personally do not care to test myself if I don't show any symptoms."

Alfred Wong, a cardiologist at a public hospital who represents a local medical professional group, said in a Facebook post that he will not sign up for the testing scheme due to the inaccuracy of Chinese testing kits.

China's BGI Genomics, one of the companies responsible for the testing, has been accused by Swedish authorities of supplying unreliable test kits after thousands of false-positive results were discovered.

Pro-Beijing lawmakers in Hong Kong have suggested that the government should introduce a COVID-19 "health code" using data collected from the testing scheme. Similar to practices on the mainland, some have proposed that only certified healthy citizens should be allowed to enter certain public premises.

However, more than three-quarters of respondents oppose the proposal in a recent survey conducted by the Hong Kong Public Opinion Research Institute, mostly citing privacy concerns.

With the number of new coronavirus cases dropping below 20 on recent days -- down from the peak of 145 -- and social distancing measures gradually relaxed, citizens in Hong Kong are even less inclined to participate in the voluntary scheme.

"If the number of [people] turning up is too low, the testing scheme will not be as effective as expected," said Dr. Chan Tsz-tai of the Hong Kong Medical Association, warning that the citywide testing cannot replace long-term social distancing measures, as people can still be infected after testing negative for the coronavirus.

"On top of the one-off scheme sponsored by Beijing, the government should continue to provide regular tests for high-risk groups," he said.