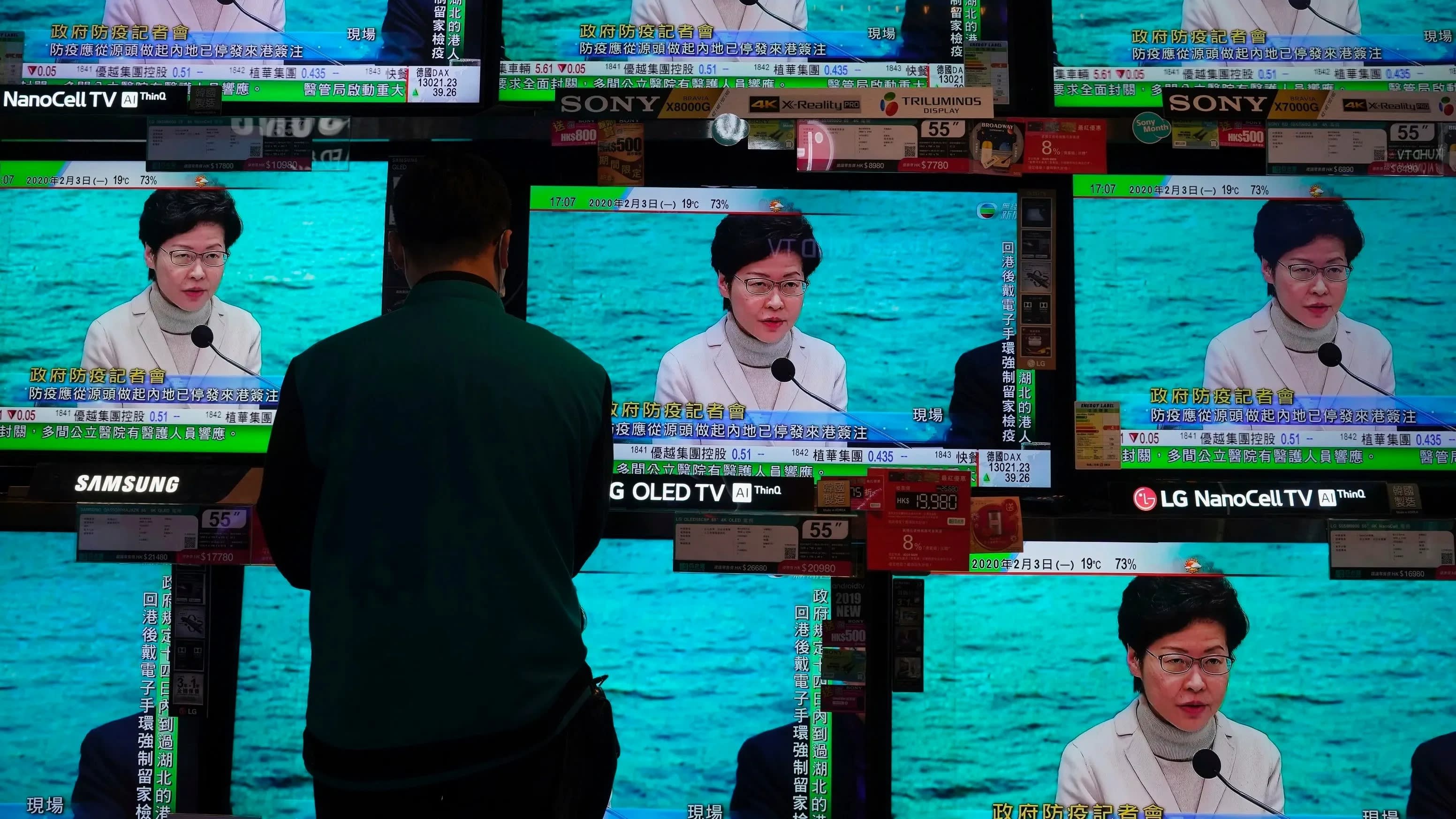 Hong Kong Chief Executive Carrie Lam did not wear a surgical mask at her news conference on Feb. 3 as she had done previously, and as other government officials have done.   © AP
MICHELLE CHAN, Nikkei staff writerFebruary 3, 2020 21:09 JSTUpdated on February 3, 2020 22:46 JST | Hong Kong, Macao
CopyCopied

HONG KONG -- Hong Kong will close most of its land border with mainland China in an effort to reduce inbound travelers and contain the outbreak of the novel coronavirus in the semi-autonomous Chinese city, Chief Executive Carrie Lam announced on Monday.

Only three out of 14 border control points in the city -- including the airport, the Shenzhen Bay crossing, and the bridge to Macao and Zhuhai -- will remain open. The closures were to take effect at midnight on Monday.

As of Monday, there were 15 confirmed cases of the disease in Hong Kong. More than 17,000 people have been infected in mainland China, where the death toll has reached 361.

The virus comes at a time when Hong Kong's economy has been battered by the monthslong political unrest and the protracted U.S.-China trade war.

The Hong Kong government said on Monday that it posted its first annual decline in gross domestic product last year, contracting 1.2%, since the global financial crisis a decade ago, making it one of the worst performers in Asia in 2019.

"The local social incidents with violence took a further heavy toll on economic sentiment as well as consumption and tourism-related activities," the government said in a statement.

Preliminary GDP declined 2.9% in the fourth quarter, marking the second consecutive quarter of year-on-year contraction, according to the Census and Statistics Department. In the third quarter, GDP fell 2.8%.

The stepped-up border measures come after the Hong Kong government is facing mounting public pressure to seal all borders with mainland China, where the virus originated. Over 9,000 medical workers have pledged to stage a strike starting on Tuesday unless all mainland borders are closed, the Hospital Authority Employees Alliance said on Monday following Lam's announcement.

About 2,500 nonemergency medical workers participated in a strike on Monday to pressure the government to close all its border crossings with the mainland.

"We have no choice but to respond this way," Yu said. This means an additional 6,000 workers, including those at emergency services units, will join the strike, bringing the total number of strikers to more than 9,000.

In her evening news conference, Lam stressed that the border closure "is completely irrelevant to the strike," and she urged all hospital employees to end their walkout. "At this critical juncture, I could not agree with the use of extreme means," she said.

Hong Kong's economy, which was already badly hit last year by the prolonged protests -- especially on the tourism and retail sectors -- is set to weaken further with the restriction of Chinese tourists.

IHS Markit said the repercussion is likely to be greater than the SARS epidemic in 2003. "The tourism sector is much bigger now than the past," it said in a research note. "Outbound tourism from mainland China into Asia has multiplied by 6.7 times since 2003, which does not bode well for growth in the region."

Meanwhile, UBS Investment Bank revised down Hong Kong economic growth forecast to minus 1.8% for 2020, against its previous forecast of a 0.5% contraction.

"Hong Kong's fiscal fundamentals, financial system stability fundamentals and FX reserves are all stronger than they were at the time of SARS," William Deng, greater China and North Asia economist of UBS, said. "We expect the government to utilize its resources to launch more measures to support the economy."

The Asian financial hub is bracing for its first budget deficit in 15 years as it pledged a $35 billion stimulus to shore up the economy over the past year. Further stimulus measures are expected in a budget announcement on Feb. 26.