HONG KONG -- A few dozen passengers, including me, disembarked slowly and orderly from a sparsely filled Japan Airlines Boeing 787-9 from Narita Airport on Monday afternoon.

We were greeted at Hong Kong International Airport by official-looking staff wearing masks, face protection shields and medical gowns. Among my numerous trips to this bustling hub, this may very well have been the first time I noticed that ground personnel outnumbered incoming passengers at the arrival gate and the airport's corridors.

The airport is designed to be quite functional and normally allows travelers to squeeze in last-minute shopping before moving on to immigration and customs clearance, but all the stores were closed on this day. What you find now are layers of checkpoints, where masked officials wait to bombard arriving passengers with form after form to be filled out, ask you to download a smartphone app for surveillance purposes, and wrap an electronic bangle around your wrist.

Welcome to the new world of international travel.

The bracelet, which I chose to wear on my left wrist, cannot be removed for 14 days during the government-imposed self-quarantine period. The face is a waterproof plastic box -- about 9-by-8-by-3cm -- attached to a black rubber band. You can wear it taking a shower, but not while soaking in a bathtub.

According to the Hong Kong government's Innovation and Technology Bureau, this gadget, working along with the mobile app, dubbed "Stay Home Safe," is the tech-based solution invented for its quarantine policy implemented since the outbreak of the coronavirus pandemic. The electronic bangle. After wearing it for nearly two days now, I still am not getting used to having it on, as I am not in the habit of sleeping with a watch on my wrist. (Photo by Kenji Kawase)

The system seems to be working.

On the night of my arrival, the territory's health department announced that two people -- a 68-year-old man and 48-year-old woman -- were sentenced to four weeks of immediate imprisonment by a court for violating the compulsory quarantine regulation. Before their 14 days were up, the pair had left their place of quarantine -- which they had registered to authorities upon arrival -- without valid reasons, and later they were tracked down and stopped at border checkpoints.

The bureau's spokesperson said the sentencing "sends a clear message to the community that breaching quarantine orders is a criminal offense" and the government "will not tolerate such actions."

It was not explicit, but the technology likely played a role in tracing the offenders, bringing them to justice and presenting a stark lesson to others, like me.

A few officials have warned me that I would be liable for a maximum fine of 25,000 Hong Kong dollars ($3,225) and six months in prison if a quarantine order is violated, including tampering with the bangle. After wearing it for nearly two days now, I still am not getting used to having it on, as I am not in the habit of sleeping with a watch on my wrist.

Moreover, the sense of being monitored by the authorities all the time gives me quite an uncomfortable feeling -- that my privacy is being breached.

In one of the many documents being handed out at the airport, the Hong Kong government's office of the chief information officer stresses that the government "will monitor whether you are staying at the place of quarantine through this app." An official could make surprise calls to check on my adherence to the rule at any time, which actually happened on Wednesday morning.

On the same document, it reads that the system does "not involve collection of personal data" and the app "will not read any information in your smartphone." Pilots at the Hong Kong International Airport. The total number of COVID-19 cases in the city of more than seven million people stands at 1,056, with four related deaths.   © Reuters

With the gadget on my wrist and a bunch of papers signed, I was taken by bus with a few other passengers to the AsiaWorld-Expo, an arena with total rentable space of more than 70,000 sq. meters, just a few minutes from the airport.

The building, jointly owned by the government and the Airport Authority, is where concerts and exhibitions are held under ordinary times. Canadian pop star Avril Lavigne was supposed to perform there this coming Sunday as part of her Asian tour, but it was postponed, like many other similar events.

As the previous Nikkei bureau chief in Hong Kong, where I am taking up assignment once again, this time as chief business correspondent, I have covered events at AsiaWorld-Expo and have been to a concert there, too. But today the venue is used to conduct the government's "deep throat sputum test" to examine saliva specimens of all incoming passengers -- whether they carry the virus or not.

In a compartmented space, you spit your saliva into a small bottle and hand it over to officials. (No one sticks a fiber into your nostrils or your mouth.)

That was painless enough, but the frustrating thing is having to wait for hours in a large hall until receiving the test results, and being required to sit in a chair without a desk or a power source to charge your phone. However, if your arrival is in the afternoon, like mine was, you will be sent to a "holding center for test results" and stay overnight at a hotel.

So, I was put on a bus again, this time with 17 other passengers, and taken to the Regal Oriental Hotel in Kowloon City, the district renowned -- and notorious -- for the now-demolished Kowloon Walled City, a one-time ungoverned settlement that is near Hong Kong's abandoned Kai Tak Airport.

The hotel since April 22 has been designated to accept travelers awaiting virus testing results. It is overseen by health officials, and no customary hotel services are provided. Once you are given a key and sent to a room, you are unable to leave until you are notified whether you carry the COVID-19 disease or not.

In my case, I received a phone call in the room after 11 a.m. the following day informing me that I tested negative. That allowed me to be discharged and grab a taxi to another hotel where I had made a reservation to lock myself up for two weeks. You are allowed to use public transportation to the place of self-quarantine, but there is an obligation to report which mode you have taken to the registered location. 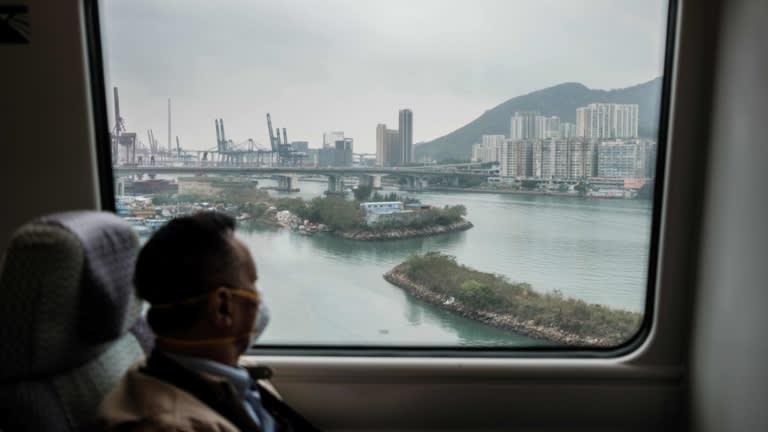 A passenger on the train that links Hong Kong International Airport to the city.   © AFP/Jiji

If I had tested positive, I would have been quarantined at another government-designated facility.

Finally, about 24 hours after landing in Hong Kong, I made my way to a hotel on Hong Kong Island, where the city's main business district is located -- as well as my office -- and I am currently locked up in a room in order to fulfill the self-quarantine requirement. It felt like a very long journey to reach this urban penitentiary, when usually it would have taken only a few hours.

The whole process made me understand the thoroughness and the determination of virus protection by the government. On Tuesday, Hong Kong's Centre for Health Protection announced no new cases as of 4 p.m. from the previous 24 hours. The total number of cases in this city of more than seven million people stands at 1,056, with four related deaths.

Those numbers, however, come with a cost. Even though some social-distancing rules have been eased in recent days, the airport arrival procedures will remain as they are and certain gatherings will continue to be restricted.

The territory's flag carrier, Cathay Pacific Airways, cut its passenger capacity by 97.3% in April compared with a year earlier. It gravely describes its current flight schedule as a "bare skeleton," serving just 14 destinations globally and carrying fewer than 500 passengers a day.

"The COVID-19 pandemic continues to impact us in an unprecedented way," Ronald Lam, chief customer and commercial officer, said in a statement last week, while revealing an unaudited loss of HK$4.5 billion for the first four months at Cathay Pacific and Cathay Dragon. That figure does not include its low-cost carrier, Hong Kong Express.

More seriously, the government's latest announcement on social distancing has effectively banned the candlelight vigil on June 4 for the Tiananmen Square crackdown, even though some schools are reopening as early as Wednesday. The annual commemoration, which has continued for three decades at Victoria Park, is now under threat under the name of virus prevention.

"There are no other considerations, apart from public health considerations," Sophia Chan Siu-chee, secretary of the Food and Health Bureau, said at a news conference on Tuesday.

Lee Cheuk-yan, the chairman of the event organizer and a longtime pan-democratic activist, raises concerns over the decision. "If the candlelight vigil is banned, it is going to be a symbolic moment," he said. "Our intention is to continue the tradition."

What happens remains to be seen, but I will be there to cover the news. My quarantine ends on May 31.