How Singapore fights COVID with contact tracing: 5 things to know

After dorm crisis, city-state is again a success story, but can others copy it? SINGAPORE -- After a long struggle to contain coronavirus infections among migrant workers, Singapore has "flattened the curve."

The daily count, once in the hundreds, is usually in the single digits now and rarely exceeds 10. Many of these are imported cases rather than local transmissions. Meanwhile, despite recording nearly 60,000 infections overall, the city-state's death toll stands at just 28.

To limit the spread of the virus, the government continues to rely on a tool it embraced early on: contact tracing. Be it through a smartphone app or with digital "tokens," the authorities want to ensure they can swiftly stamp out any possible clusters.

As other countries aim to revive their economies while avoiding new waves, Singapore's approach may be instructive. At the same time, aggressive tracing is bound to raise questions about privacy.

Here are five things to know about how Singapore is tackling and living with COVID-19.

Authorities have deployed a mixture of technologies to track people in case someone turns out to be a coronavirus carrier.

One aspect of this is SafeEntry, a system for checking in and out of offices, shopping malls, cinemas and other places. Individuals are required to use their mobile phones to scan QR codes and enter some personal information. This way, they can be alerted if an active carrier happened to be in the same spot at the same time.

This is combined with the TraceTogether program, which uses a smartphone application or portable electronic tokens to track close encounters between people using Bluetooth wireless technology. Singapore is pushing to increase adoption of its TraceTogether contact tracing system. (Photo by Dylan Loh)

Has the public been receptive?

To an extent, the public does not have much of a choice. If they want to go to the mall, for example, they must check in with SafeEntry. Those who do not wish to use their smartphones for this can opt to have their national identity cards scanned.

But this system has clear limitations. It can only tell that certain people were in a general area at a given time. TraceTogether, on the other hand, can tell the authorities that someone had a close brush with an actual COVID carrier.

The drawback of TraceTogether is that it is only as effective as the number of people who adopt it. About half the population has signed on, but officials hope to boost this to at least 70%.

So starting in December, TraceTogether will become mandatory for entering workplaces, schools, malls and restaurants. Basically, SafeEntry check-ins will be completed by scanning the QR codes through the app.

Since not everyone has a smartphone, a distribution drive is underway to provide free TraceTogether tokens. These electronic devices have QR codes printed on them, which can be used for SafeEntry whenever the necessary scanning equipment is in place.

A rush to collect the tokens prompted a decision to stagger the distribution process to prevent overcrowding at the pickup sites.

Separately, the authorities are handing out more than 450,000 contact tracing devices to all migrant and local workers living or employed in dormitories, as well as those working at construction sites, shipyards and process sectors. These workers are seen as high-risk groups, after tens of thousands of infections in their densely packed housing facilities. The devices, called BluePass tokens and designed to be wearable on work sites, are expected to be fully distributed by early November.

The government has stressed that TraceTogether does not collect geolocation data -- it does not track your every move. The Bluetooth information is stored locally in the user's phone in an encrypted form, to be accessed only if the person tests positive and is contacted by tracing officials.

Personal information, including mobile phone numbers, is not revealed to other TraceTogether users. And officials say the Bluetooth data is automatically deleted after 25 days.

Even so, the decision to require checking in with TraceTogether does not sit well with everyone. "The Singapore government is now doubling down by mandating, in practical if not legal terms, the download of their contact-tracing app," Lizzie Osia, a lawyer and expert on human rights, told Nikkei.

Misgivings aside, at least the stepped-up contact tracing means Singapore can resume life as we knew it before COVID-19. Right?

Not exactly. Officials have repeatedly emphasized that pre-COVID life should not be expected under the current circumstances.

After shutting down much of its economy for more than a month earlier this year, the city-state has reopened in phases, with precautions still in place. With TraceTogether deployed en masse, Singapore hopes to enter another phase toward the end of this year -- allowing, for example, gatherings larger than the current maximum of five people. But the authorities have warned that rules could be tightened again if COVID cases spike.

"The new normal will be different from what we were used to in the pre-COVID days," Health Minister Gan Kim Yong said in parliament in October. "We have to be very mindful that while the number of cases in Singapore is low, the cases around us, other parts of the world, [are] still rising. So therefore, we cannot let our guard down." 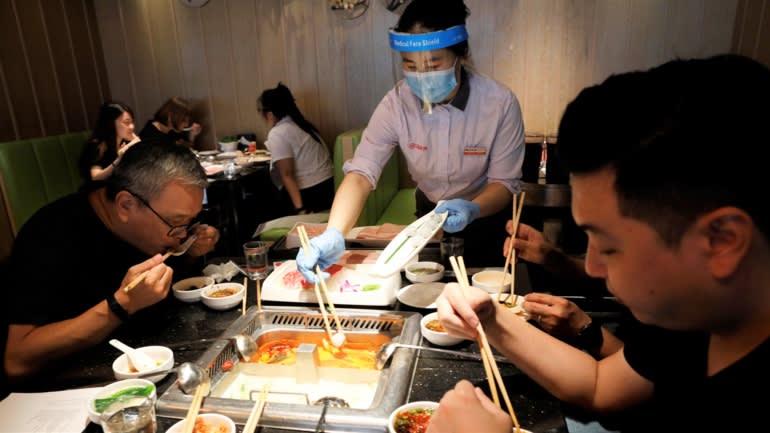 "Safe distancing ambassadors" continue to prowl the streets, making sure strangers practice social distancing. Eateries caught flouting the rules on large gatherings have been banned from operating, while fines have been meted out to individuals for breaching regulations.

To keep workplaces safe, employees are asked to work from home at least half the time, and no more than 50% of staff should be working together at once.

Authorities are also taking no chances when it comes to the migrant workers hit hardest. Those living in dormitories must undergo testing for COVID-19 every two weeks at facilities set up for this purpose.

Can other countries copy Singapore's strategy?

Singapore is making its TraceTogether system freely available to developers globally. But adopting the tiny country's battle plan might not be so simple.

Governments elsewhere may be unwilling or unable to enforce safety regulations the way the city-state does. In Japan, for instance, guarantees of individual freedom and a general wariness of far-reaching government powers have stopped authorities from doing any more than asking the public to cooperate. Japan did have a spell under a national emergency, but the government could not force people to stay indoors.

The Lancet, a prominent medical journal, noted that South Korea, China and Singapore have all successfully used digital contact tracing to control COVID-19 transmissions, often putting the public interest above individual privacy. But it cited other places -- the U.S., Israel and Europe -- where privacy concerns and technical issues have made widespread tracing a challenge.

Abhineet Kaul, Asia-Pacific operations head for public sector and government consulting at Frost and Sullivan, told Nikkei Asia that various factors will determine whether other countries can follow the Singaporean way: availability of digital tools and infrastructure, trust in the government and the role of authorities.

"It is a unique case in each country -- South Korea and China have been success stories for contact tracing, but both have taken a totally opposite approach to it," he said, referring to the former's use of everything from security footage to credit card data versus the latter's reliance on color-coded smartphone apps.

Kaul suggested some countries might consider setting up a "council" of trusted citizens to oversee data privacy and promote tracing tools. "Even if it is mandatory," he said, "the strength of legal system and human enforcers will dictate the adoption."