How the coronavirus shut down my home city in China 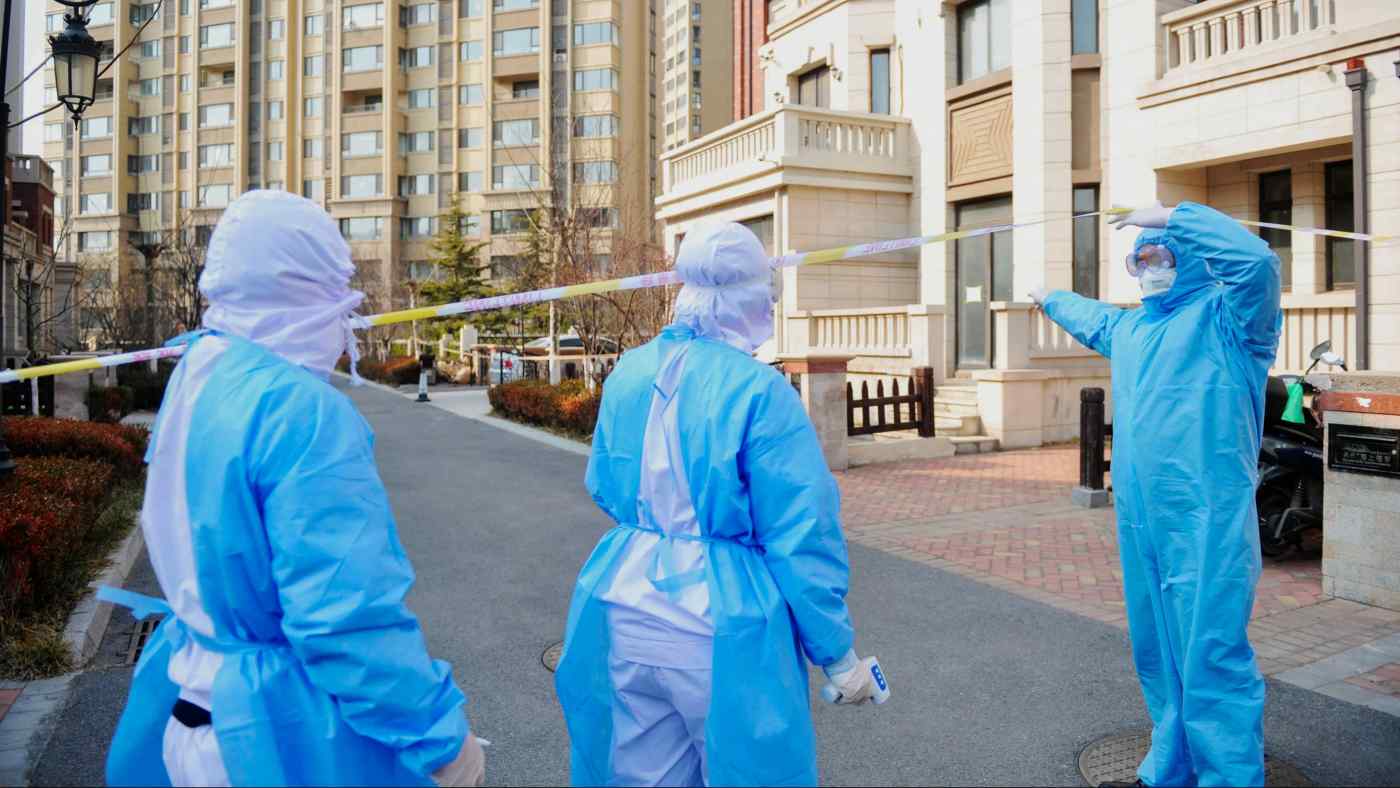 Workers visit a quarantined family in Qingdao, Shandong province, China, on Feb. 3. The city of nine million people has come to a standstill because of the coronavirus, despite being more than 1,000 kilometers from the epicenter of Wuhan.    © EPA/ Jiji
NIKKI SUN, Nikkei staff writerFebruary 8, 2020 11:54 JST | China
CopyCopied

HONG KONG -- My dad looked disappointed when I arrived back from Hong Kong to spend the Lunar New Year holidays with family in the eastern Chinese city of Qingdao.

This year, my suitcase wasn't packed with chocolates, fine wines and premium Chungwha cigarettes. In their place were dozens of N95 masks and vitamin C supplements.

I arrived home on Jan. 23, two days before the Lunar New Year, a time when millions of Chinese families gather together. On that day, the city of Wuhan -- the epicenter of the new coronavirus -- was locked down in an attempt to prevent the spread of the disease. Five million people left the city before it was quarantined, and experts warned of dire consequences as human-to-human transmission was confirmed.

In Qingdao, a coastal city of 9 million that is more than 1,000 km from Wuhan, people were remarkably calm. Few wore masks on the streets, and wet markets were crowded with housewives hunting for fresh food to prepare for the year-end banquet.

But two days later, everything changed. People in my neighborhood woke up to the news that a man who returned from Wuhan spent two hours on the Qingdao subway, using four different lines, before showing symptoms of the virus. The number of deaths nationwide jumped to 41, with more than 1,000 cases.

My family thought it was strange that I washed my hands 20 times a day and wore a mask and gloves everywhere. My aunt tried to comfort me: "Don't worry. It will get better soon." And she ignored my demonstrations on how to wear masks properly. Instead she shared on article in our family WeChat group with the headline: "All the diseases are illusional and the best way to cure a disease is to live a healthy life."

As a conscientious journalist, I immediately reported the post to China's internet censors for containing false information that could mislead middle-aged and elderly people. 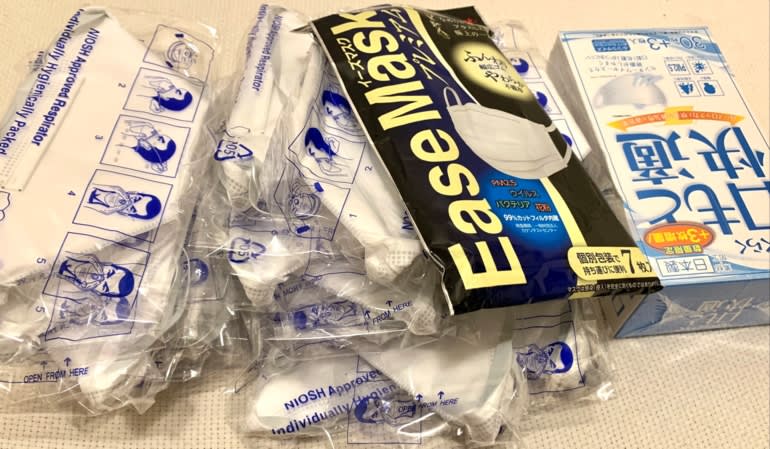 Some of the protective masks I brought home for my family. (Photo by Nikki Sun)

But when I walked into the living room that morning, my dad was unwrapping the package of the vitamin C supplements I brought to strengthen his immune system against the virus. Having not previously touched it, he was reading the instructions. "So you just put it in water and drink, right?" he asked.

Outside, it was eerily quiet.

When I took a walk -- my only outing of my whole week in Qingdao -- only a few people were on the streets. Most of them were dog walkers and cleaners. Empty buses drove past. No dama, or middle-aged women, were square dancing. Only a few shops were open, and drugstores had signs saying: "Masks sold out." In one grocery store, baskets of imported bananas rotted on the shelves, along with other tropical fruits.

It did not look like a typical New Year at all.

Normally, people would trot out to visit relatives carrying gift boxes in both hands. Smiling kids in new clothes would give traditional greetings, receiving money-filled red envelopes from their adult relatives. Lovers would hang out around the spring fair at the beach, eating tanghulu candied fruits. All this would be accompanied by the raucous sound of firecrackers.

But this year, the only place where I saw people gathering was in the supermarket, and they were panic buying, stocking up on food. 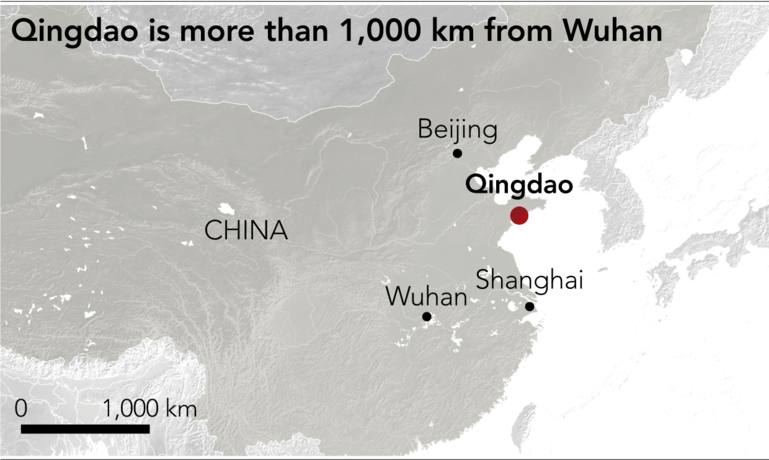 My family decided it was too risky to compete with the crowd of shoppers. Instead, we decided to downsize our usually lavish New Year meals. We had almost 20 dishes plus dumplings for dinner on New Year's Eve, with the number whittled down to 15, to 10, to eight by the time I left. We were the lucky ones. In Wuhan, the front-line doctors and nurses were surviving on cup noodles.

My parents and I spent the holiday with the families of my dad's three sisters in my grandmother's old house. With outdoor activities off the table, we managed to have some fun at home.

Our favorite pastime was to play a Qingdao-originated card game called baohuang, or protecting the emperor. I loved the game when I was little but for years couldn't find enough people to play with me; everyone always had something more important to do. With the virus bringing the city to a halt, though, I finally got to revisit a childhood indulgence.

We also followed the news closely. It was depressing to see the death toll climb to hundreds within days. Nearby, more villages and housing estates were being quarantined due to suspected cases. 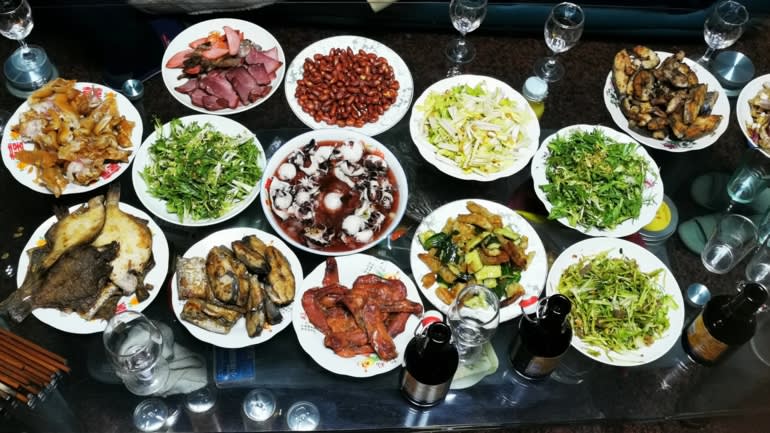 The table is laid for a family meal over during the Lunar New Year holiday. (Photo by Nikki Sun)

Everyone in my family was affected in some way.

My cousin had to cancel his train ticket to Shanghai because his company postponed the date for employees to return to work. My 8-year-old niece had to take online courses to keep up with her studies. My younger aunt couldn't join us because she worked in a hospital treating coronavirus patients. My dad, who owns a small machinery factory, had to hold off production despite a looming delivery deadline.

And there was me, remotely interviewing people from Wuhan and writing their horrifying stories. They broke my heart.

What an awful beginning to 2020. Can whatever god please restart it?

I secretly rejoiced that my beloved grandmother, who died a month ago, did not have to see the suffering of her people and her nation. She'd have been very sad.

But life must go on. After spending the week with my family, I was due to fly to Tokyo for work.

The night before I departed, my dad was smoking on the couch, frowning. The number of confirmed cases had climbed to 7,711, from 571 on the day I arrived in Qingdao.

"Yes," I said, "it's better for someone in the family to be outside China if things get worse."

Dad bent his head in silence. He put out his cigarette.

"We of course want you to be with us," he said. "But I think you should leave. It's a good thing for you."

Update: My cousin has since made it back to work in Shanghai, my niece is still studying online, my aunt remains busy at the hospital, and my father insists he is taking his vitamin C. As for me, I'm working at home under self-imposed quarantine in Hong Kong, where I wrote this memoir.