In India's slums, social distancing is a luxury that can't be afforded In Dharavi, people who do not have surgical masks make do with handkerchiefs or shirtsleeves tied around the mouth.   © Reuters
AKIRA HAYAKAWA, Nikkei staff writerApril 29, 2020 02:54 JST | India
CopyCopied

Dharavi, the country's largest slum in the heart of Mumbai, sparked a media sensation with its first reported COVID-19 case on April 1. The patient, a 56-year-old man who died that day, initially admitted himself to the hospital on March 23, a day before Prime Minister Narendra Modi declared a nationwide lockdown.

The man reportedly had not traveled far, living in one of roughly 300 housing units built by the government as part of a revitalization project. Ninety shops in the immediate area were shut down for good measure. Yet ever since the first report, roughly 170 more people in Dharavi caught the virus as of April 20, while bringing total fatalities to 11.

Dharavi, the setting for the Oscar-winning movie "Slumdog Millionaire," is home to roughly 1 million people packed in a 2 million sq. meter area. The population jumps to an estimated 2 million people if the count includes those without state-issued identification and is considered one of the largest slums in the world.

Any spaces between the tiny shanties are alleys less than 1-meter wide. Sanitation is an ongoing problem. Because a large number of families do not have toilets, they share public restrooms. Even under strict lockdown, many cannot remain in their homes for the entire day. Dharavi's business district houses over 10,000 small workshops, many of which separate waste plastic, process leather goods or firing pottery. The lockdown forced the businesses to suspend their activities. But both the business proprietors and the employees can spend their nights sleeping in the workshops if they have nowhere else to go.

Public health officials across the world have stressed that people should avoid the "3Cs," or closed spaces, crowds and close contact to ward off the coronavirus. In Dharavi, all three situations are unavoidable.

In the slums, people who do not have surgical masks make do with handkerchiefs or shirtsleeves tied around the mouth. Those looking to stem the spread of the virus out of fear have taken to making barricades out of carriages, automobiles, carts and sticks.

But in Mumbai, child beggars continue to approach people out shopping. The children would grab someone's attention by lightly tapping shoulders or touching arms.

On April 14, the day Modi extended the lockdown to May 3, nearly 1,000 migrant workers flocked to Mumbai's Bandra railway station. They heard rumors that the government will authorize a limited number of trains to take passengers back to the villages they came from.

Many of the laborers hail from the states of Uttar Pradesh or West Bengal. Without a source of income under the extended lockdown, they faced extreme poverty.

Although Modi called for social distancing, the throng at Bandra was packed so close together people could barely move. The police ultimately broke up the crowd using clubs. 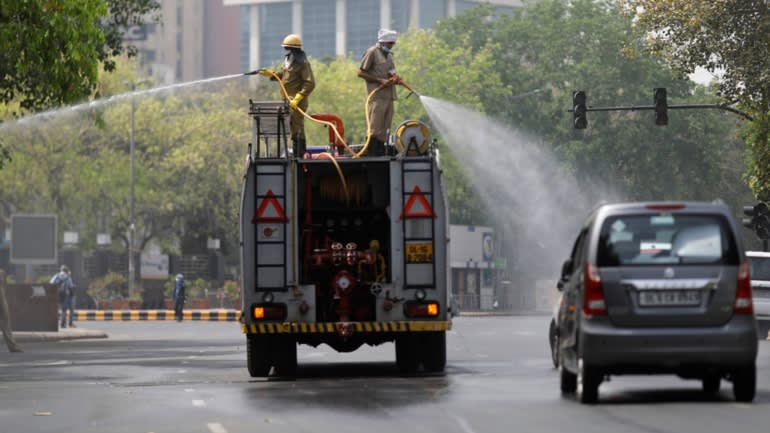 Workers spray the streets of New Delhi during the nationwide lockdown.   © Reuters

Religious customs have become risk factors as well. At roughly 14% of the population, Muslims make up the second-largest religious group in India behind Hindus. In March, over 6,000 Muslims gathered in New Delhi for a missionary gathering. More than 1,000 ended up being infected with the coronavirus.

With the Muslim holy month of Ramadan beginning last week, authorities at the national and local level are in high alert, since the observance goes hand-in-hand with homecomings to birth villages and mass prayers. Religious gatherings have been banned, and the police have been deployed to issue administrative guidance.

Since the lockdown was declared, infections in India have multiplied by a factor of 40, exceeding 29,000 people as of Tuesday, according to data from Johns Hopkins University in the U.S. The Indian government said the increase is because of expanded testing. On March 9, the day the first case was discovered, India only conducted 100 tests per day. The daily capacity has since jumped to 3,000 tests in April.

The rate of increase has subsided. Before the lockdown, the doubling of infections took 3.4 days. The metric has now improved to 7.5 days, according to data released April 20. Yet the news provides little solace for concern since the cases continue to climb.