In echo of China, US medics silenced on coronavirus concerns PALO ALTO, U.S./HONG KONG/TAIPEI -- Ming Lin, an emergency room physician in Washington state, has been updating his Facebook page every day since March.

After his shift, the 17-year veteran at PeaceHealth St. Joseph Medical Center in Bellingham, Washington, would speak out on social media and talk to reporters about his concerns over the hospital's lack of readiness to handle the new coronavirus outbreak.

After reporting the first coronavirus case in the U.S., Washington remains one of the states with the highest number of confirmed infections in the country. Overwhelmed with an influx of patients and a lack of essential personal protection equipment such as masks, Lin called his hospital "a mini Wuhan" in a March 25 Facebook post.

"Morally, when you see something wrong, I think you have to speak out," the Chinese American doctor said in a YouTube interview on March 26.

The next day, he was fired.

According to Lin, hospital supervisors had been threatening to sack him for over a week because of his media interviews and refusal to take down his accusatory social media posts.

Lin's firing has ignited a national outcry, and many people on social media are calling on the medical center to rehire him.

"Please I ask that in a time of National Crisis we channel our energy toward helping our fellow citizens," Lin wrote on a Facebook post days after he was fired. "Protesting and showing animosity toward PeaceHealth is not the solution. Let's not distract my fellow colleagues, co-workers and friends who need your support to take care of those less fortunate. We need to work together as a community." Lin is not the only medical professional in the U.S. to be punished or warned for speaking out about the difficulties front-line workers are facing.

In March, a former nurse at Northwestern Memorial Hospital in Illinois filed a wrongful termination lawsuit alleging she was fired after warning co-workers that the masks the hospital was providing did not adequately protect staff.

Meanwhile, NYU Langone Health, one of the largest health systems in the country, has warned employees they would be "subject to disciplinary action, including termination" if they talked to reporters without authorization, according to multiple media reports. NYU Langone did not respond to requests for comment.

Not all hospitals are pressuring staff for going on the record, but some doctors and nurses face censorship in daily life.

A front-line nurse at a medical center in Delaware told the Nikkei Asian Review that her hospital did not forbid staff from speaking publicly, but there was a strong feeling among them of the need to keep silent, with the consequences of speaking out unclear.

"Even though I think what they are doing is posing risks, I may lose my job if I publicly say something to criticize the medical system and hospital policies," the nurse said.

Some members of Washington State Nurse Association are receiving regular warnings from their employers that they could be disciplined or fired if they talk to the media, Ruth Schubert, the nurse union's communication director, told Nikkei.

"We have been very careful about not letting our members talk to the press because of exactly this fear -- that they will be disciplined or fired," Schubert said.

However, the association recently launched a social media campaign, "#SilenceKills," to encourage nurses to speak up.

"While WSNA is doing everything we can as a union to push forward the concerns of our nurses, it is time to lift the fear of retaliation and allow them to speak up about the very real concerns they are seeing in their hospitals," Schubert said.

Some hospitals are citing reasons such as patient-doctor confidentiality, preventing public fear or the spread of misinformation to defend their decisions to censor front-line medical professionals.

A senior manager at PeaceHealth said Lin was fired because his warnings were driving public fear in the same way as someone "yelling fire in a crowded theater."

"When somebody may be having stroke symptoms, may be having chest pain, and they think, 'Boy, I've heard from that doctor that it's not safe to go there, I'm going to drive an hour [to another hospital]' -- that's the level that it reached, and that's the reason why we had to take action," Richard DeCarlo, chief operating officer at PeaceHealth, said in a video interview on April 4. Medical workers inspect a CT scan image at a hospital in Xiaogan city in Hubei, the Chinese province hit hardest by the novel coronavirus outbreak, on Feb. 20.   © Reuters

However, preventing front-line doctors and nurses from speaking about their experiences might leave more room for public fear and misinformation about COVID-19.

"Silencing nurses and other caregivers means that public officials and the public at large do not have the information they need to make sound decisions and to understand this crisis," said Schubert from Washington State Nurse Association. "Nurses speaking out about the urgent need for personal protective equipment so that they can do their jobs safely has nothing to do with patient privacy."

Many medical professionals agree. After examining the social media accounts of more than a dozen doctors, including Lin, Nikkei found that posts disclosed no private patient information.

"No employer should restrict physicians' freedom to advocate for the best interest of their patients," said Patrice Harris, president of American Medical Association.

Lin's Facebook page is now filled with comments thanking him for speaking out.

"Thanks Dr. Lin. I think you did the similar thing as Dr. Li Wenliang in China, you should be recognized as a hero who is caring about American medical staff so much, and unfortunately was treated unfairly, hope it can be corrected soon," reads one comment. 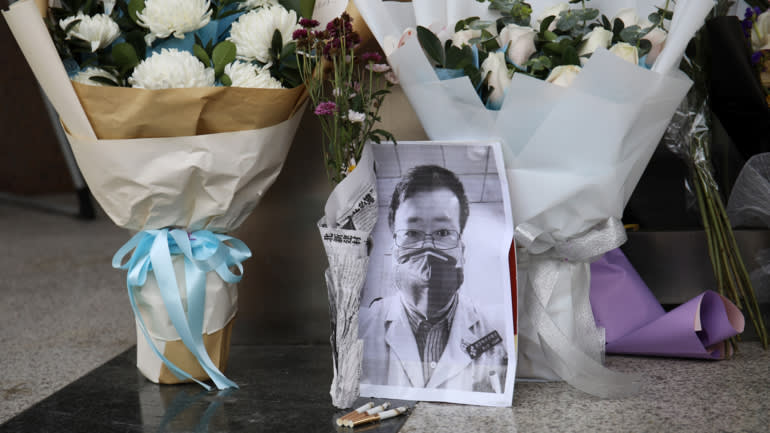 A makeshift memorial for Li Wenliang, a doctor who contracted and died from COVID-19 after issuing an early warning about the coronavirus outbreak, at the Central Hospital of Wuhan in Hubei province, China, on Feb. 7.   © Reuters

Li, an ophthalmologist at Wuhan Central Hospital, was among the earliest to alert other medics about the spread of a mysterious virus. But as soon as his warning caught public attention in early January, Li was reprimanded by Chinese police for "spreading false rumors."

Local health care authorities in Wuhan also stepped in, saying information about the SARS-like virus should not be arbitrarily released, to prevent social panic. Ai Fen, another doctor in Wuhan who was also punished for warning colleagues about the virus, recalled the hospital management saying: "Do not even tell your own husband," according to her interview in People, a Chinese magazine.

Unaware of the potential danger, more than 67,000 people in Hubei province, of which Wuhan is the capital, were infected with the new virus, among them at least 3,000 medical workers, according to the latest Chinese government statistics. Due to a lack of proper protection, Li, the whistleblower, contracted the virus at work and died.

In China, where the coronavirus outbreak has so far claimed at least 3,300 lives, the practice of silencing front-line medical workers has long been in place.

A doctor in Jinan, a city in northern China's Shandong province, told the Nikkei Asian Review that his hospital did not specifically warn doctors to keep silent during the outbreak, but few dared to speak out anyway.

"If we say too much publicly, we risk losing our jobs," he said on condition of anonymity.

His hospital set up a rule some years ago requiring front-line medical workers to seek permission before being interviewed. If a doctor is approached by journalists, he or she must redirect the inquiry to the hospital's administration, and, if permission is granted, an official will supervise the interview.

The doctor in Jinan said that although some of his colleagues were skeptical about treating the disease with traditional medicine -- a recommendation made by China's Ministry of Health -- no one voiced concerns or suggested an alternative.

"There is no conclusion on how to treat the disease," the doctor said. "But if we do what we are told to, at least the hospital authority and the patients' family cannot blame us for that."