In pictures: First weekend of Tokyo shutdown to stem coronavirus TOKYO -- Some of the Japanese capital's busiest spots were bereft of the usual crowds this weekend after authorities urged citizens to stay home for the weekend as a record rise in new coronavirus cases stirred fears of an explosive increase to come.

Three straight days of new cases numbering 40 or more pushed Tokyo's total of confirmed infections to nearly 300 -- the highest for any region in Japan. In a further cause for worry, the number of those for which transmission routes remain unknown also increased rapidly.

Yuriko Koike, Tokyo's governor, has called on residents to refrain from going out on Saturday and Sunday, except when necessary.

Governors of the neighboring prefectures of Kanagawa, Chiba, Saitama and Yamanashi have also asked citizens to stay away from Tokyo over the weekend.

The capital and the surrounding region is Japan's most heavily populated area, with more than 30 million people. The requests appeared to be effective for some areas, where far sparser crowds than usual were seen Saturday morning. That included popular cherry blossom viewing spots such as Ueno and Yoyogi parks, where Tokyo authorities have restricted access to prevent crowds from gathering. Crowds were thinner at this intersection in Ginza, a popular shopping district on Saturday. (Photo by Kosaku Mimura)

But enforcement was light and life went on for Tokyoites in residential areas.

The bustling streets of the Tokyo suburb of Sangenjaya were slightly quieter than normal, with shops, cafes and restaurants open for business as usual. Chie and Hidehiro Yamada stand outside their bottle shop and bar in Sangenjaya. Shops were mostly open in this surburban neighborhood on Saturday. (Photo by Andrew Sharp)

Bicycle parking spaces at the Seiyu supermarket were full and queues at the checkout tills were long. Most food items were available, with only goods like instant noodles in short supply.

At Ueno Park, where the seasonal blossoms are nearing full bloom, hardly anyone could be seen with the atmosphere unusually still. 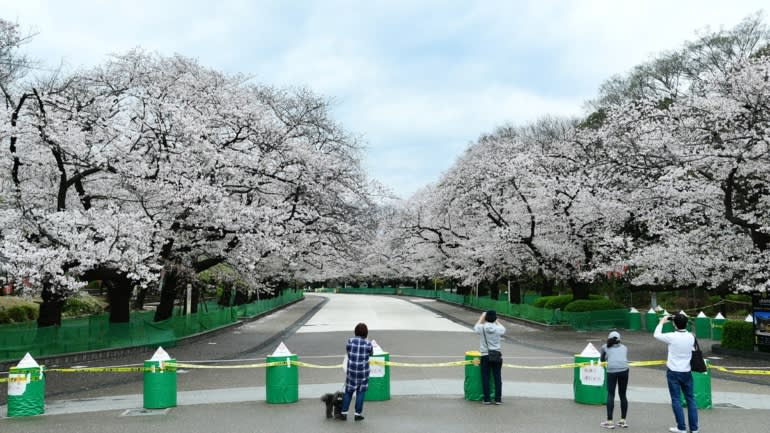 A cherry-blossom-lined path in Ueno Park is closed Saturday to pedestrians. Other spots in the capital popular for hanami (flower viewing) imposed similar restrictions. (Photo by Shihoko Nakaoka)

"This is the first time I have seen this few people here," a 34-year-old man, who normally walks among the pink blossoms on his way to work, told Nikkei, contrasting that with what he described as the usual scene of packed crowds, even on weekday mornings, when the trees are in bloom.

Souvenir shops and restaurants in the Ameya Yokocho shopping area near the park were open, but business was slow.

"The number of customers increased last week during the long weekend, but is now sharply down due to the closure of Ueno Park," said a 51-year-old restaurant worker. "It's supposed to be a time to make money." 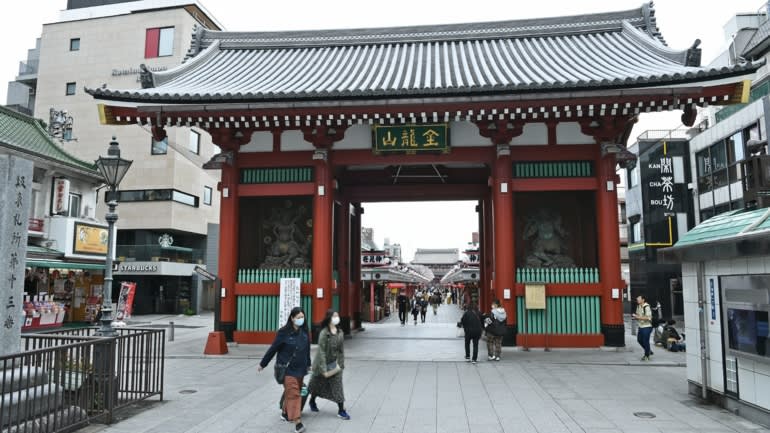 Tourists are sparse on Saturday at the normally crowded gate to Sensoji temple in Asakusa. The landmark giant red lantern has been taken down for replacement. (Photo by Shihoko Nakaoka)

Across town, the Shibuya shopping and entertainment district, which is normally busy on weekends with young shoppers, was notable for its largely empty streets on Saturday morning.

The iconic Shibuya 109 department store, a magnet for teenagers, and movie theaters in the area were closed for business.

The Toshimaen amusement park in Nerima Ward, usually crowded with families on weekends, was also closed. No fun today: The Toshimaen amusement park in Nerima Ward on Saturday has closed its gates to visitors. (Photo by Rie Ishii)

A 20-year-old man from Chiba Prefecture, who works in an office, ventured out to have a meal with a friend, but decided to return home after finding many stores closed.

In Tokyo's upscale Ginza shopping district, meanwhile, the landmark department store Mitsukoshi opened its doors later than usual. But few shoppers could be seen in the area as many luxury shops decided to close. 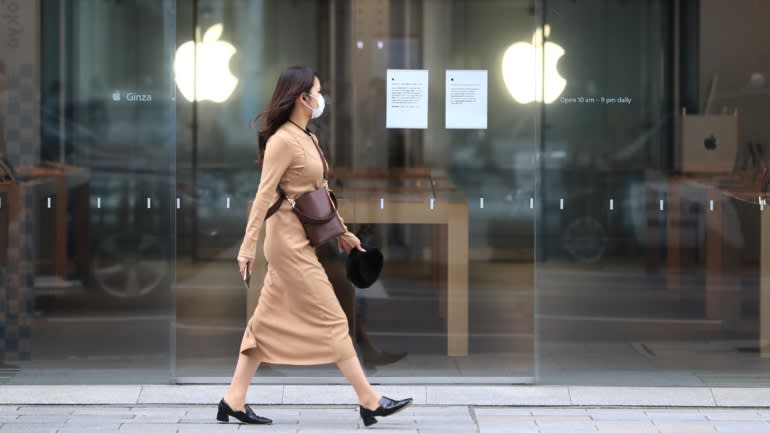 The Apple store in Ginza has been temporarily closed. (Photo by Kosaku Mimura)

Others had more pressing concerns. A woman employed at a clinic said she had to work on Saturday, but was clearly apprehensive. "I'm worried about infection," she said. A couple wearing protective face masks walks past the Shibuya 109 department store in Tokyo on a nearly empty street during a snowfall on Sunday. (Photo by Ken Kobayashi) 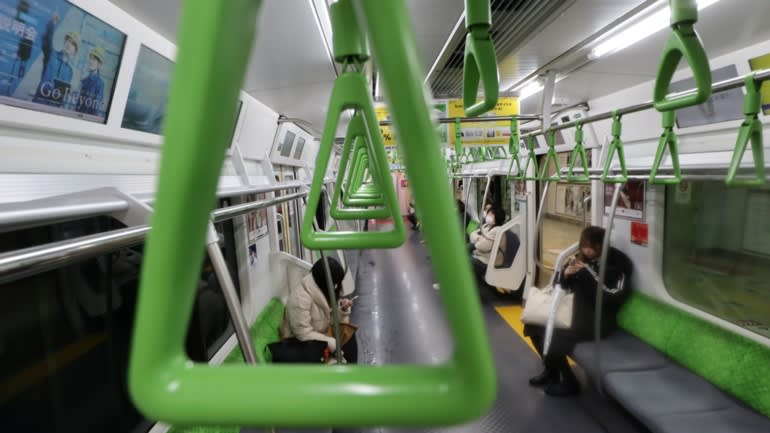 A couple wearing face masks walk in Shinjuku during a snowfall on Sunday. (Photo by Ken Kobayashi)