Singapore and other countries offer aid while tightening border rules 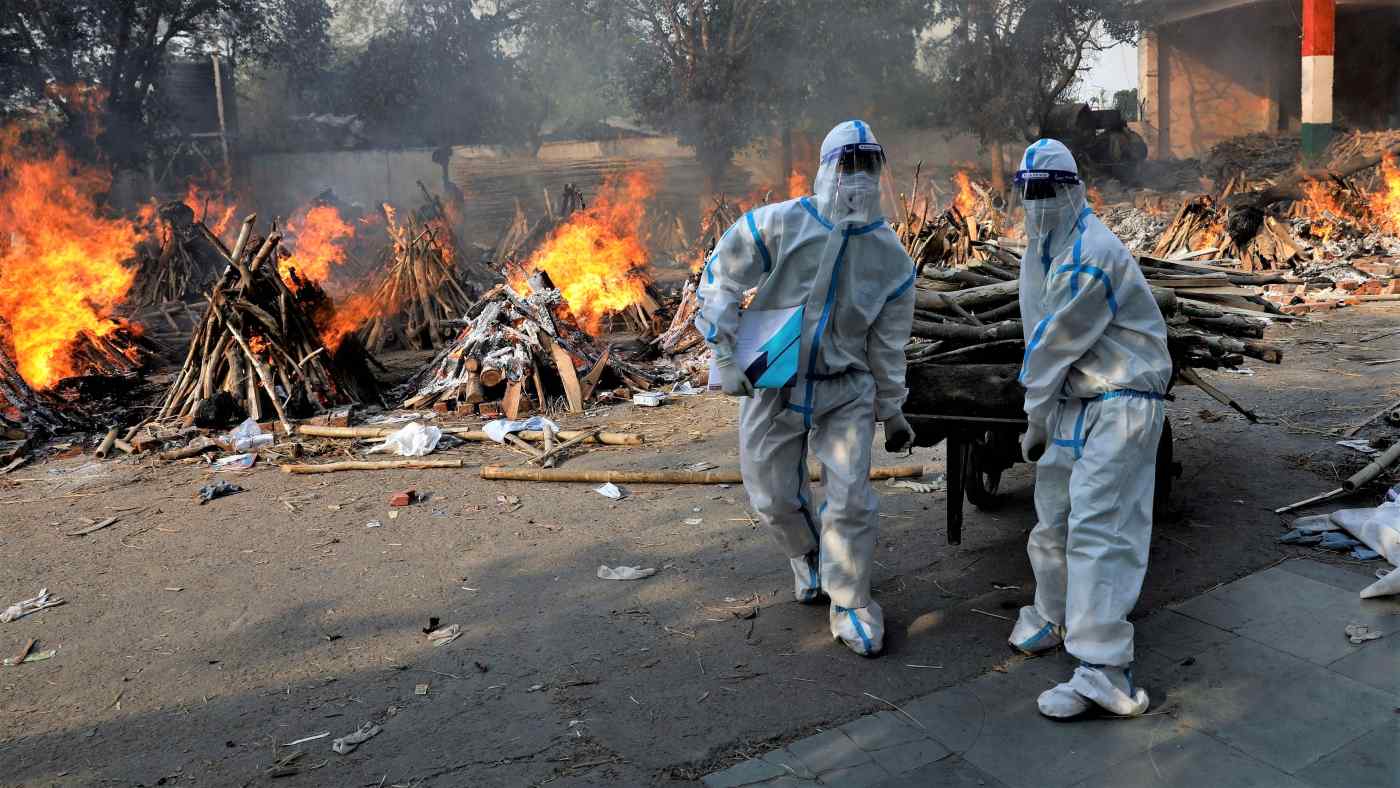 SINGAPORE -- Asian and other countries are rushing to send oxygen and critical medical supplies to India, as its exploding COVID-19 infections push its medical infrastructure toward a breaking point.

At the same time, governments -- in some cases the same ones offering help -- are imposing stricter border controls against arrivals from India. They hope to protect their own populations from potentially more contagious virus variants that were first detected in India and have already turned up on foreign shores.

Singapore and India's archrival Pakistan are among the nations extending aid to South Asia's most populous country, which on Monday set a global record for coronavirus cases for a fifth straight day, at 352,991. Hospitals are running short of oxygen and beds, leading to an increase in mortality -- about 2,800 deaths were reported the same day.

Tuesday's numbers put the new case load over the last 24 hours only slightly lower, at 323,144.

The U.S. is sending a "strike team" of medical experts and supplies to help its partner in the Quadrilateral Security Dialogue, or Quad -- a loose alliance that also includes Japan and Australia. The White House has pledged raw materials for vaccines, diagnostic test kits, ventilators and personal protective equipment.

On Monday, Reuters reported that the U.S. Chamber of Commerce had teamed up with 40 companies to provide assistance to India, including a portal for corporate donations. The head of the chamber warned there is a "real risk" of the Indian economy faltering, with spillover effects.

Singapore's state investment company Temasek Holdings on Sunday started sending oxygen concentrators, ventilator machines and other supplies, with the first batch arriving in Mumbai. "No one is safe till everyone is safe," the company said in a Facebook post. An oxygen tank is loaded into an India-bound aircraft at Singapore's Changi Airport on April 24. The city-state is one of a number of countries extending aid to India.   © High Commission of India for Singapore via Reuters

Several other countries, including France, Germany, the U.K. and Saudi Arabia, have made similar offers of medical equipment. So has India's neighbor Pakistan. Islamabad's Foreign Ministry issued a statement on Saturday, saying it had offered to provide items including ventilators and X-ray machines.

"The concerned authorities of Pakistan and India can work out modalities for quick delivery of the relief items," the ministry said. While the two countries have ongoing conflicts over territory, Pakistan faces the risk of a similar outbreak if the virus is left unchecked.

China says it has also reached out. Chinese Foreign Ministry spokesman Wang Wenbin on Monday said Beijing and New Delhi "are communicating with one another" at present. "We stand ready to offer support and assistance to the best of our capability if the Indian side informs us of its specific needs," he said.

India's first major coronavirus wave had peaked last September at more than 97,000 daily cases. This second more infectious and deadlier wave is suspected of being driven by new strains of the virus, including one with two mutations linked to increased transmissibility. This variant has already been spotted in Australia, Singapore, Japan and elsewhere.

Still, the variants are shrouded in uncertainty. Experts also point to recent mass gatherings for election rallies and religious festivals in India, and a growing disregard for social distancing and mask-wearing, as possible contributors to the deadly surge. 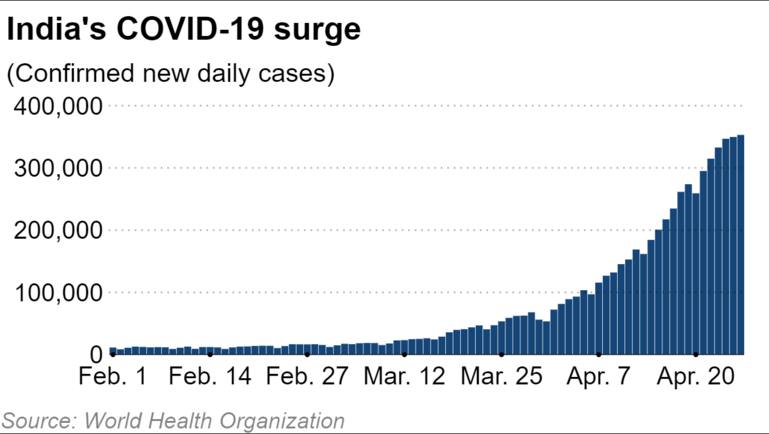 India has been promoting itself as a world leader in vaccine production, and positioned itself at the center of a Quad plan to produce 1 billion doses of COVID-19 vaccines. A senior U.S. official on Monday said the plan was "still on track" and "moving forward," according to Reuters.

But as of Sunday, about 8.5% of India's population had received at least one vaccine dose, according to the statistics website Our World in Data. That was ahead of many Asian countries but well behind the roughly 41% figure for the U.S. and 49% for the U.K.

And while New Delhi scrambles to control its outbreak, other countries are clamping down on travel from India.

Fellow Quad member Australia on Tuesday decided to suspend all direct passenger flights from India until May 15, Reuters reported. It was also reportedly planning to send aid. New Zealand and Hong Kong already suspended arrivals from India earlier in April.

On Tuesday evening, Philippine presidential spokesman Harry Roque tweeted that "all travelers coming from India or those with travel history to India within the last fourteen days preceding arrival shall be prohibited from entering the Philippines" from April 29 to May 14.

Also starting Tuesday, the Maldives will stop visitors from India from "staying at tourist facilities in inhabited islands," the Tourism Ministry announced on Twitter. Since India is a major source of vacationers for the island nation, the new restrictions could be a blow to the industry. A man receives oxygen support inside his car in Ghaziabad, India, on April 24.   © Reuters

Neighbor Bangladesh's Foreign Ministry announced on Sunday that general movements of people across its land border with India would remain suspended from Monday to May 9.

Singapore last week tightened its border measures for travelers from India by reducing entry approvals. All arrivals from India must now serve an additional seven-day home quarantine, in addition to a 14-day quarantine in dedicated facilities.

The coronavirus is largely under control in the city-state, but imported cases are hitting double digits. On Sunday, Singapore logged 40 imported infections, and more than half the patients had been in India.

Thailand, which is fighting its own coronavirus surge, is also tightening up. The Thai Embassy in Delhi said in a statement that entry certificates for non-Thai nationals traveling from India will be suspended until further notice, citing the worsening virus situation within Thailand.