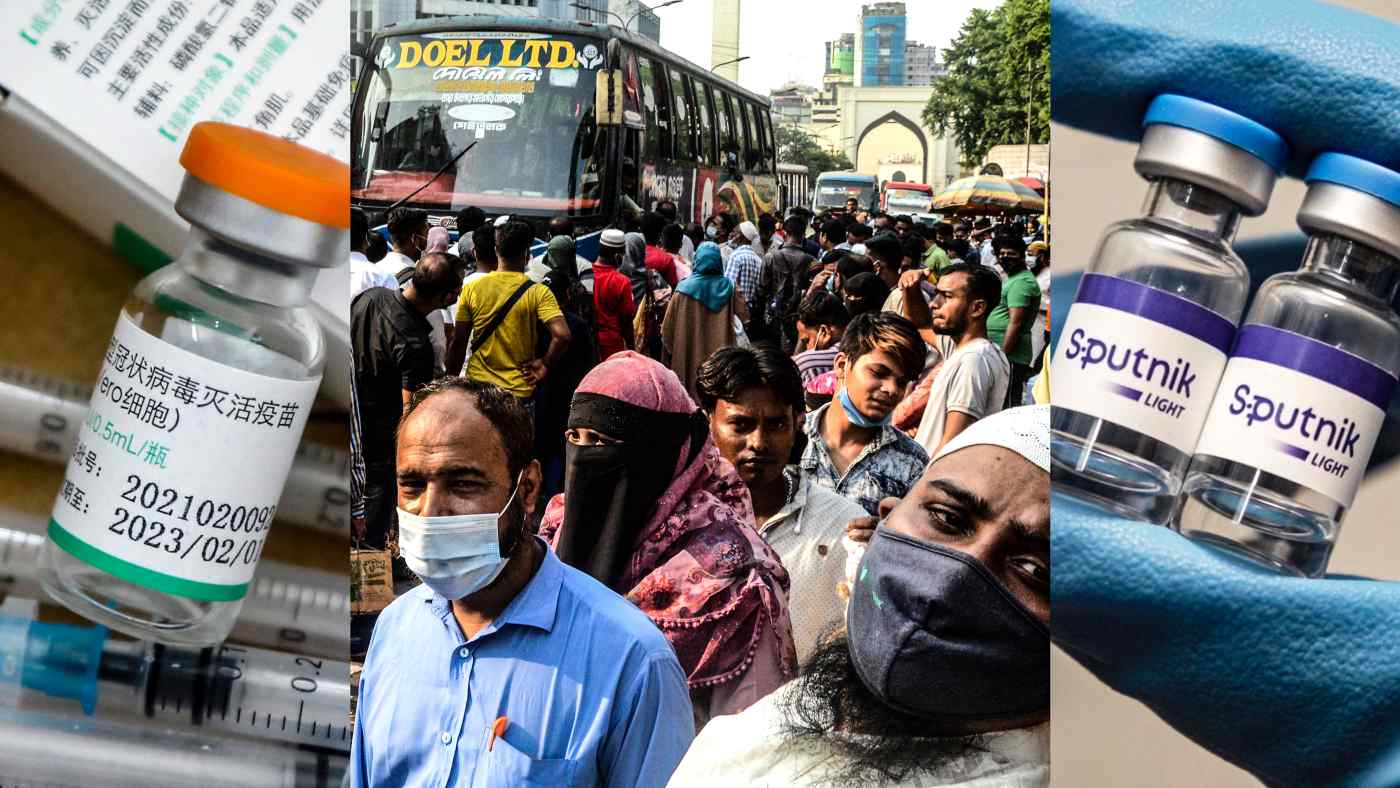 Bangladesh is turning to Chia for the Sinopharm vaccine, left, and to Russia for Sputnik jabs as India deals with its own corona crisis. (Source photos by Reuters and Getty Images)
SYFUL ISLAM, contributing writer, and KIRAN SHARMA, Nikkei staff writerMay 7, 2021 19:58 JST | Bangladesh
CopyCopied

DHAKA/NEW DELHI -- Bangladesh has turned to China and Russia for COVID-19 vaccines now that India has suspended exports to deal with rapidly climbing numbers of infections and deaths.

India finds itself in crisis mode as a second wave of the pandemic sweeps across the country of over 1.3 billion. With New Delhi now scrambling to inoculate as many as it can, its efforts to supply affordable jabs to neighboring countries have been stymied. Russia and China are helping to fill the void.

Running out of the crucial remedies, Bangladesh in late April signed a deal with Russia to import and jointly produce the Sputnik V vaccine. Bangladesh has also agreed to join China's COVID vaccine storage facility for South Asia. Afghanistan, Pakistan, Nepal and Sri Lanka have also come aboard.

Bangladesh, which has a population of nearly 170 million, expects to receive 500,000 doses from China by Monday.

Shahida Akhter of the Bangladeshi government's cabinet division told reporters that a number of Bangladeshi pharmaceutical companies have the necessary facilities and capabilities to produce the vaccines.

"Production will start as early as possible to meet needs," she said.

Professor Meerjady Sabrina Flora of Bangladesh's Directorate General of Health Services, however, told Nikkei Asia that there is no process in place to begin making vaccines in Bangladesh.

"We will let you know when things turn final," she said.

The Serum Institute of India, which is domestically producing the AstraZeneca vaccine, had been the lone supplier to Bangladesh. The government of Bangladesh had delivered an advance of some 13 billion takas ($153.3 million) worth of vaccine to fulfill a contract signed in December. The Serum Institute is supposed to provide a total of 30 million jabs to Bangladesh in monthly allotments of 5 million or so.

Infections in India began a rapid climb in early March.

On April 8, however, New Delhi tried to counter media reports by maintaining there was no export ban. "We've always said that supply of 'made in India' vaccines abroad would continue taking into account our domestic requirements," Arindam Bagchi, India's foreign ministry spokesperson, told reporters that day. "Let me reiterate that there is no ban on [the] export of vaccines."

Bangladesh also received some 3.3 million doses from India in the form of a gift from the government.

But uncertainty shrouds how and when Bangladesh might receive the remaining jabs it is due from Serum. India has not replied to a recent request from Bangladesh to supply some 3 million doses to help meet the country's immediate needs. 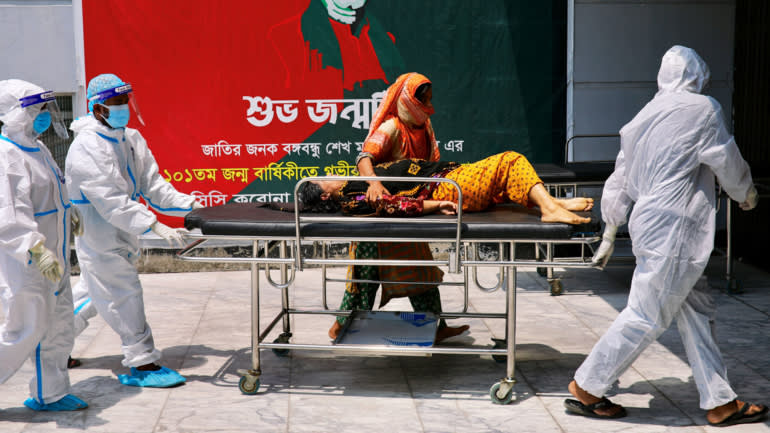 A coronavirus patient arrives at a temporary hospital in Dhaka. According to the government, 767,338 people in Bangladesh have tested positive for the coronavirus and 11,755 have died.   © Reuters

The Bangladeshi government currently has an insufficient 1.4 million jabs on hand, Dr. Robed Amin, a spokesman for the Directorate General of Health Services, said on Wednesday during a virtual briefing. Bangladesh needs some 200,000 doses per day, according to Foreign Minister Dr. A.K. Abdul Momen.

Through Tuesday, some 7.24 million people had registered to be vaccinated, and 5.81 million had received their first shot. Around 3.16 million had completed their two-shot courses.

Due to short supplies, Bangladesh's vaccine supplies have dried up, forcing the government on Wednesday to stop registering people who wish to be inoculated.

Also, initial doses are no longer being given, following a suspension on April 26.

Meantime, Bangladesh is also trying to secure AstraZeneca vaccine supplies from the United States, Foreign Minister Momen said on Wednesday. "We are expecting it [vaccines]," Momen told reporters, adding that Bangladesh's ambassador to the United States is in touch with the officials concerned.

The U.S. has plans to share up to 60 million doses with countries that are in serious need of jabs; its highest priorities are India and Brazil.

While visiting Dhaka in early April, John Kerry, a U.S. special envoy for climate issues, assured Bangladesh that the U.S. would make vaccines available when America builds up a surplus.

Momen said three Bangladeshi pharmaceutical companies have contacted the government expressing interest in domestically producing vaccines; they are hopeful of turning out a combined 15 million doses a year.

According to government statistics, 769,160 people in Bangladesh have tested positive for the coronavirus, of which 11,796 have died and 702,163 have recovered.

Since April 14, the nation has been on lockdown in an attempt to contain a second wave. On Wednesday, the government extended the lockdown until May 16.

India's COVID crisis is showing no signs of letting up. The country is struggling to contain a vicious second wave. Hospitals are running out of oxygen and beds, and crematoriums and burial sites are overflowing with bodies.

On Friday, the country reported its highest-ever daily total for new infections, 414,188, which pushed cumulative cases to nearly 21.5 million

India also counted 3,915 fatalities for the past 24 hours.

The South Asian nation's first wave peaked in mid-September, when it recorded a one-day total of over 97,000 new infections. The variant driving the current wave is far more virulent and deadlier. The country, which started its inoculation drive on Jan. 16, widened the program on May 1, making all adults eligible for vaccinations. Until April 30, only those 45 and older were eligible.

India has so far administered over 162 million doses. However, owing to its shortage of jabs, the number of daily vaccinations has plummeted, after having peaked at over 4.3 million in early April. On Wednesday, the country inoculated about 1.9 million people.