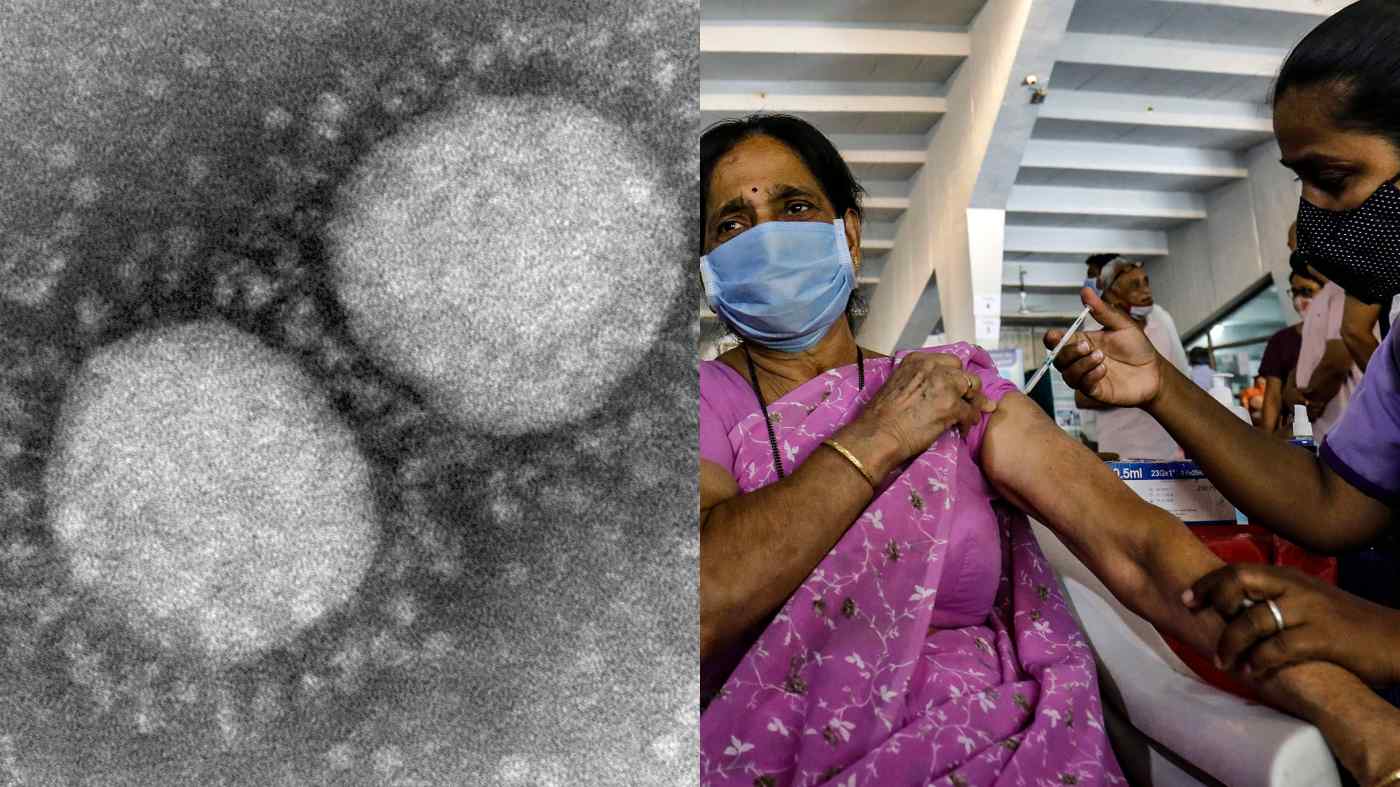 There are fears that a COVID-19 variant may have helped fuel the exponential rise in India's COVID-19 cases, which are overwhelming the nation's vaccination efforts. (Source photos by Reuters and National Institute of Infectious Diseases/Kyodo)
AKANE OKUTSU, KIRAN SHARMA, CLIFF VENZON and APORNRATH PHOONPHONGPHIPHAT, Nikkei staff writersApril 21, 2021 16:54 JST | Japan
CopyCopied

India on Wednesday reported another record number of new daily infections, 295,041, topping 200,000 cases for a seventh consecutive day and pushing the country's total to 15.6 million.

The Philippines, which has been battling record-high daily cases since mid-March, on Sunday confirmed over 10,000 new infections.

In Thailand, new cases have soared this month owing to Songkran, a weeklong holiday during which Thais normally return to their hometowns. New infections jumped from 552 on April 9 to 965 on April 13, the first day of the holiday period, and to 1,582 on Friday at the end of Songkran.

Though daily cases in Japan fell below 1,500 as a state of emergency ended March 21, the number rebounded to 4,611 on Sunday. Osaka Prefecture alone marked a record 1,220 new infections Sunday, prompting Osaka Gov. Hirofumi Yoshimura on Tuesday to ask the government for another state of emergency declaration. 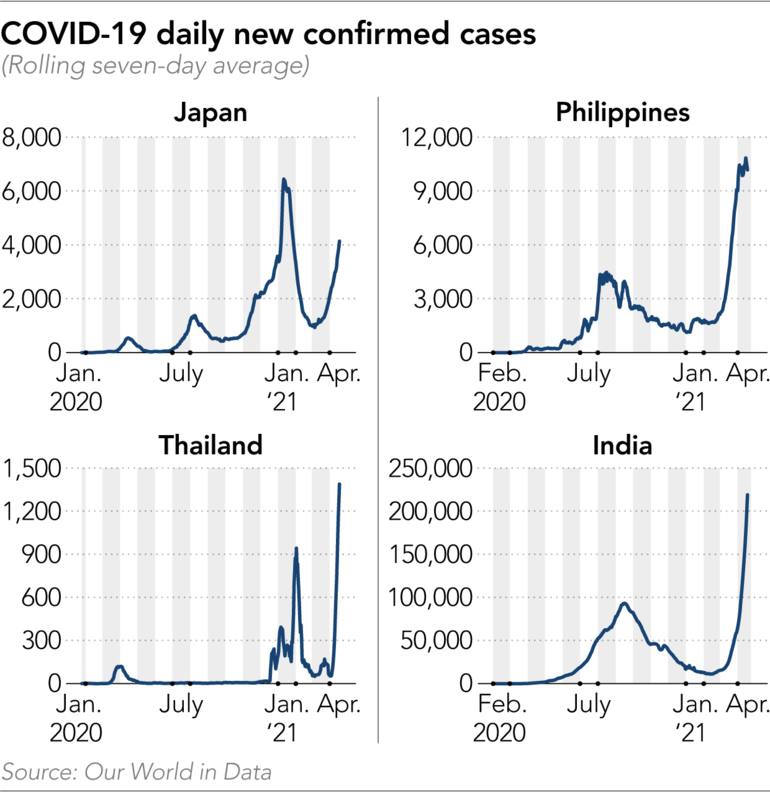 Yoshimura suggested tighter business restrictions from the previous state of emergency, such as closure of shopping malls. Prime Minister Yoshihide Suga told reporters on Tuesday night that he "wants to promptly draw a conclusion" about the declaration and necessary measures.

India, Thailand, Japan and the Philippines represent countries in the region where situations are deteriorating at remarkable speed. And the virus is evolving fast in the face of social distancing efforts and vaccination programs. New strains that are more contagious, and possibly more harmful, represent a crucial difference from previous COVID-19 waves in these Asian countries.

Some of these Asian countries not only have identified variants first discovered in the U.K., South Africa and Brazil, but also are spotting new variants. Virus mutations occur naturally all the time as they replicate inside their host. The coronavirus is believed to mutate every two weeks. 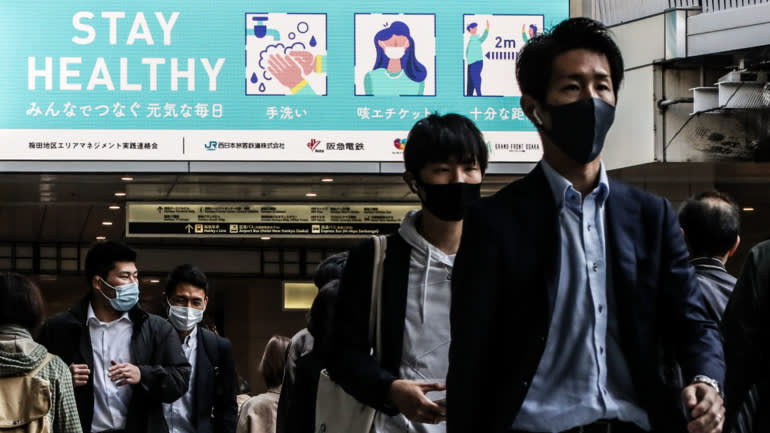 Pedestrians in Osaka on April 20. Despite near-universal mask-wearing among residents, the prefecture on April 18 set a record with 1,220 new daily infections. (Photo by Hiromasa Matsuura)

In the case of Japan, uncertainties posed by the new strains are causing more headaches for Olympic organizers, who are now considering whether to delay making a decision regarding domestic spectator restrictions until May.

The Philippine Health Department said Sunday it has detected 658 total cases of the B.1.1.7 variant, first found in the U.K., and 695 infections from B.1.351, a variant first detected in South Africa. Most of the new variant infections are "local cases," while some are linked to returning overseas workers, the department said. About 10 million Filipinos live and work overseas, and thousands have been repatriated since the pandemic began.

The country also reports 25 new cases of the P.3 variant, first detected in the Philippines, bringing the total to 148 infections linked with P.3. Despite the rise in cases of the local variant, the Health Department said the P.3 is "still not identified as a variant of concern since current data is insufficient to determine whether the variant will have significant public health implications."

As the new surge of cases is overwhelming Philippine hospitals, and the country faces delays in the arrival of vaccines, stricter lockdown rules have been imposed in the capital and outlying provinces -- covering one-quarter of the population -- until the end of the month.

Thailand has detected the B.1.1.7 variant. Virologists suspect it was brought in by people who move between Thailand and Cambodia, rather than visitors arriving directly from Britain. The Thai Health Ministry said it has prepared thousands of beds in field hospitals around Bangkok, but concerns exist that more may be needed if cases continue to rise rapidly.

In Japan, the more contagious strains could explain the faster spread of infections as well as more patients with severe symptoms, Yoshimura suggested this month.

Of the cases tested by the Tokyo Metropolitan Institute of Public Health between April 5 and 11, about 38% involved the variants first found in the U.K., South Africa and Brazil, believed to be more contagious than the original virus.

About 46% of infections differed from these variants and carried a mutation called E484K, suspected of making vaccines less effective and reinfecting those who previously had COVID-19. E484K, which is also found in the South Africa and Brazil variants, raises renewed concerns that the vaccine drive will not be as effective as originally hoped, just as the program kicks off in Japan.

Suga has been desperate to vaccinate the population, and the prime minister even directly called Pfizer CEO Albert Bourla while he was visiting the U.S. for his summit with President Joe Biden. Suga told reporters Monday that supplies of coronavirus vaccines for Japan's entire population were expected by the end of September.

"The CEO said he wanted to expedite the talks," Suga said.

India also has identified a new variant, which has two mutations E484Q and L452R. Maria Van Kerkhove, COVID-19 technical lead at the World Health Organization, told a virtual media conference on Friday that "there is a similarity in these mutations which confer increased transmissibility ... and some of these mutations also result in reduced neutralization, which may have an impact on our countermeasures, including the vaccines."

India doubled its daily figure to 200,000 just 11 days after hitting 100,000 on April 5. The capital region of Delhi was placed under lockdown Monday until April 26, with the government saying the city's health system faces extreme stress owing to rapidly rising infections.

The double mutation variant also has been found in countries such as Australia, Germany, Ireland, New Zealand, Singapore, the U.K. and the U.S.

Amid fears that the double mutant variant may have fueled the exponential rise in India's COVID-19 cases -- along with factors such as political and religious mass gatherings, vaccine hesitancy and growing disregard for face masks and social distancing -- much remains uncertain about the virus. The government said in an April 16 statement that "higher transmissibility of this variant is not established as yet."