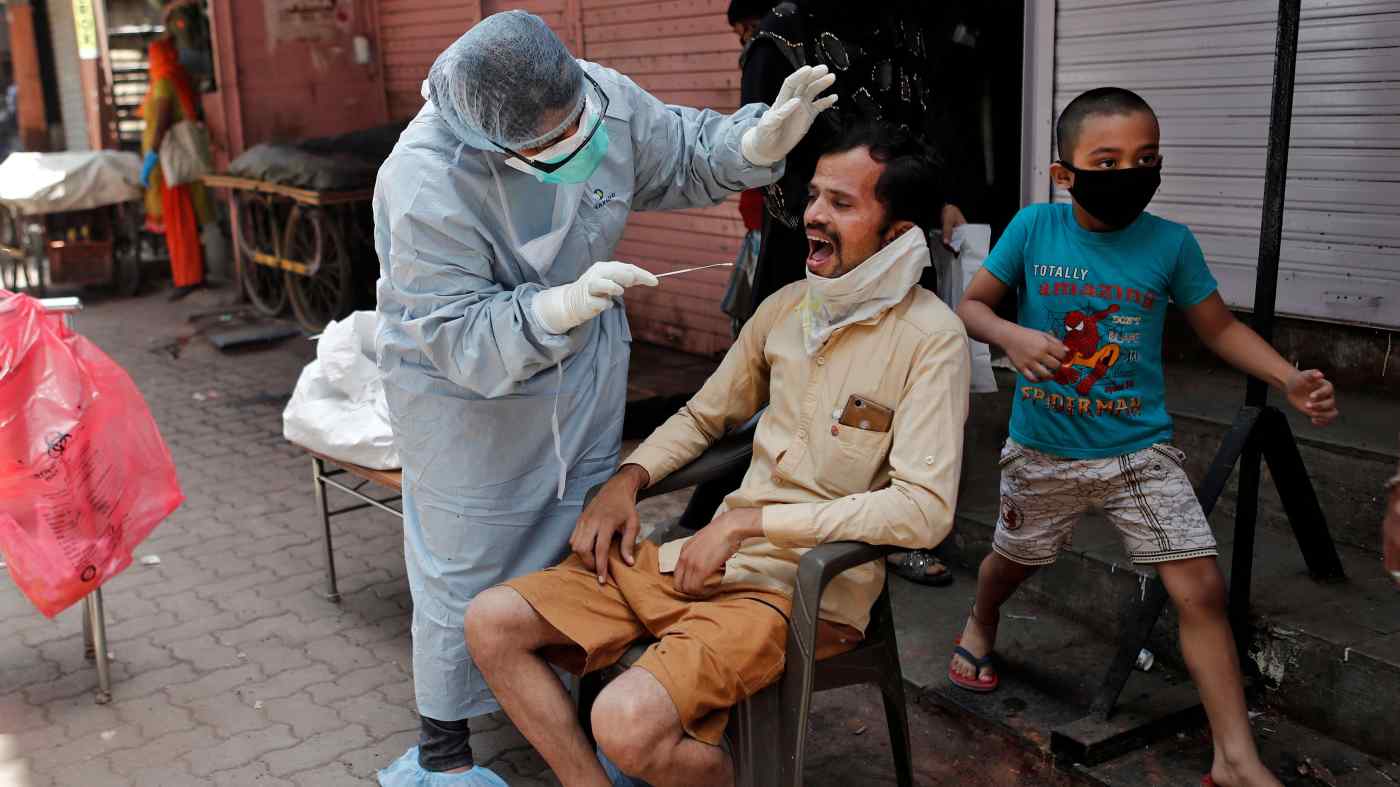 A doctor tests a patient for the coronavirus in Dharavi, one of Asia's largest slums, at the outset of India's nationwide lockdown, which has failed to conquer the novel coronavirus.   © Reuters
KEN KOYANAGI, Nikkei Asian Review Editor-at-largeMay 7, 2020 19:17 JSTUpdated on May 7, 2020 20:47 JST | India
CopyCopied

MUMBAI/TOKYO -- India on Monday entered Phase 3 of the world's largest lockdown, in place since March 25. Although the action is being dubbed a two-week extension of the quarantine, it marks a considerable relaxation of the ban on people's movements and interactions in many parts of the country.

With it, India shifted its COVID-19 battleplan from a uniform nationwide lockdown to more locally tailored restrictions implemented by local governments. The move comes after the world's most stringent lockdown succeeded in preventing a surge in infections but failed to move the daily infection rate onto a downward trajectory.

On Monday morning, many urbanites in so-called "green zones" and "orange zones," where infections are none or few, rushed out of their homes to buy beer and whiskey. Long lines were observed in many cities immediately after some liquor stores were allowed to reopen for the first time in nearly six weeks.

Online, Amazon.com, Flipkart, Snapdeal and Paytm resumed accepting orders for non-essential items -- things other than groceries and drugs -- from green- and orange-zone residents. They were immediately inundated with orders.

Meanwhile, people living in red zones, which local governments have designated as infection hotbeds, remain banned from stepping out of their homes and taking deliveries of non-essential items.

Prime Minister Narendra Modi made this policy pivot in spite of national daily infection counts that refuse to decline.

Newly confirmed COVID-19 cases and deaths were on a constant rise leading up to Phase 3. On Sunday, the nation experienced its largest single-day increase in new infections, 2,487, and in fatalities, 83, according to the Ministry of Health and Family Welfare.

Neighboring Pakistan and Bangladesh are experiencing similar trajectories despite their own lockdowns and restrictions.

The common trend among South Asian nations contrasts with that in richer countries and regions, where lockdowns and severe restrictions have led to clear results. In the U.S. state of New York, Italy and Japan the daily counts clearly began decreasing within a week or two of lockdowns or similar restrictions. And in the U.K., numbers at least plateaued.

Even major middle-income countries in Southeast Asia have succeeded in flattening the pace of daily new occurrences. The virus's persistence in India, Pakistan and Bangladesh reflects problems that these nations share. Large segments of their populations are poor, the governments must make do with limited funding and the health-care systems leave plenty to be desired.

The per-capita gross domestic product in all three countries is less than $2,200, well under the corresponding figures for major Southeast Asian economies. In cities, millions live in dense slums where it is impossible to follow stay-home orders and practice social distancing.

The Indian government in 2013 projected that the country's total slum population would surpass 100 million by 2017, up from the roughly 65 million counted in the 2011 census, the most recent. The World Bank and other researchers estimate Pakistan and Bangladesh have more than 30 million slum dwellers.

Orangi Town in Karachi, Pakistan, is widely believed to be the world's largest slum. Population: 2 million.

A recent Hindustan Times report estimated Dharavi in Mumbai, the largest and most infamous of India's slums, has 850,000 dwellers and a staggering population density of over 350,000 people per square km. New COVID-19 cases have been occurring almost every day in Dharavi since April 1, when the first case was confirmed. By Tuesday, cumulative infections stood at 632 and the death toll at 20.

In fact, during India's first 21-day stringent lockdown phase, there were visible signs that people were not staying home. People hung out on sidewalks along major boulevards or left their homes to chat with neighbors, even in Mumbai's relatively wealthy Bandra West district.

Bandra West is also home to small slums, where housewives can be seen responding to the lockdown by doing laundry on sidewalks and chatting with each other as their kids play nearby and husbands take it easy smoking. The typical home for a family of four or five is a single room of 10 sq. meters or less with no toilet or running water.

It is simply impossible for these residents to "stay home" as directed by the prime minister.

Millions of informal-sector daily wage earners lost their jobs and living quarters immediately after the lockdown was put in place, creating a massive and sudden surge in poverty, hunger and bad hygiene.

With this dynamic playing out, the lockdown and social restrictions gradually lost their effectiveness.

At an online conference hosted by Harvard University in mid-April, Dr. Richard Cash, a senior lecturer at the school, cautioned that hunger and deteriorated physical and mental health due to the lockdown will lead to "far more deaths than the epidemic would cause."

The Indian government's decision to partially ease its restrictions appears intended to address the lockdown's severe adverse effects. Modi seems to be betting that allowing economic activity to rev up in the green and orange zones will alleviate some of the hardship being felt by daily wage earners who lost their jobs.

If this is the case, India's attempt to balance virus-control measures with maintaining economic activity will likely set a precedent for South Asia.