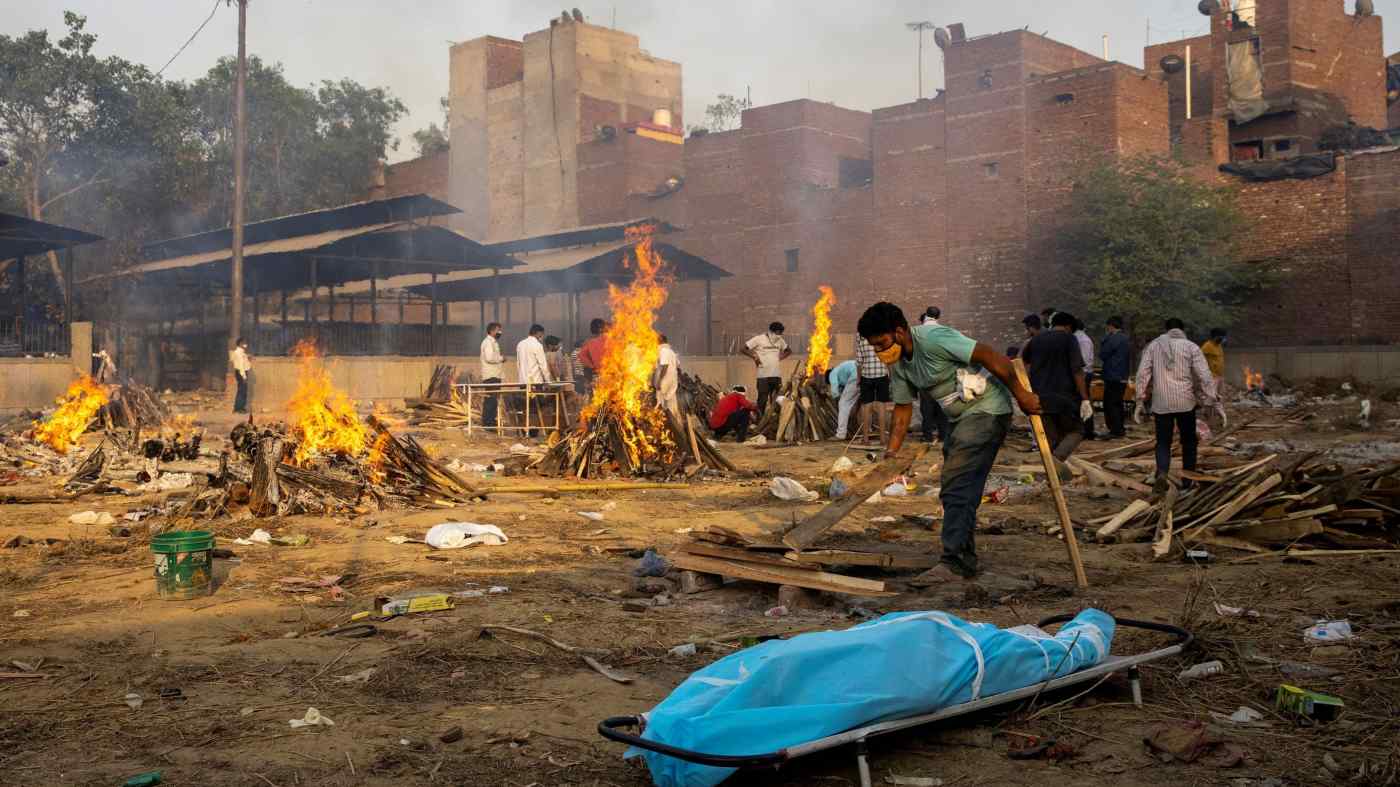 A man prepares a funeral pyre at a crematorium ground in New Delhi. India has suffered the world's worst-ever infection totals for two days in a row now.   © Reuters
April 23, 2021 13:54 JST | India
CopyCopied

MUMBAI (Reuters) -- India reported the world's highest daily tally of coronavirus cases for the second day on Friday, surpassing 330,000 new cases, as it struggles with a health system in crisis and beset by accidents.

Deaths in the past 24 hours also jumped to a record 2,263, the health ministry said, while officials across northern and western India, including the capital, New Delhi, warned most hospitals were full and running out of oxygen.

The spike in cases came as a fire in a hospital treating COVID-19 patients killed a dozen people on Friday, the latest accident to hit a facility in India crowded with people infected with the coronavirus.

"Twelve people have died in the fire, according to the information we have right now," a fire official said about the blaze that began in a critical care unit of the Vijay Vallabh hospital in a suburb of the city of Mumbai.

On Wednesday, 22 COVID-19 patients died at a public hospital in Maharashtra state when their oxygen supply ran out after a leak in the tank. At least nine coronavirus patients died in a hospital fire in Mumbai on March 26.

Medical oxygen and beds have become scarce, with major hospitals putting up notices saying they have no room for any more patients and police being deployed to secure oxygen supplies.

Max Healthcare, which runs a network of hospitals in northern and western India posted an appeal on Twitter on Friday for emergency supplies of oxygen at its facility in Delhi.

Similar desperate calls from hospitals and ordinary people have been posted on social media for days this week across the country.

Bhramar Mukherjee, a professor of biostatistics and epidemiology at the University of Michigan in the United States, said it was now as if there was no social safety net for Indians.

"Everyone is fighting for their own survival and trying to protect their loved ones. This is hard to watch," Mukherjee said.

In the capital, New Delhi, people losing loved ones are turning to makeshift facilities that are undertaking mass burials and cremations as funeral services get swamped.

Amid the despair, recriminations have begun.

Health experts say India got complacent in the winter, when new cases were running at about 10,000 a day and seemed to be under control, and lifted restrictions to allow big gatherings.

"Indians let down their collective guard. Instead of being bombarded with messages exhorting us to be vigilant, we heard self-congratulatory declarations of victory from our leaders, now cruelly exposed as mere self-assured hubris," wrote Zarir F Udwadia, a pulmonologist and a member of the Maharashtra state government's task force, in the Times of India.

But it has been wary of the economic costs and upheaval to the lives of legions of migrant workers and day laborers of a reimposition of sweeping restrictions.

A new more infectious variants of the virus, in particular a "double mutant" variant that originated in India, may have helped accelerate the surge, experts said.

Britain said it found 55 more cases of the Indian variant, known as B.1.617, in its latest weekly figure, taking the total of confirmed and probable cases of the variant there to 132.

India, a major producer of vaccines, has begun a vaccination campaign but only a tiny fraction of the population has received a shot.

Authorities have announced vaccines will be available to anyone over 18 from May 1, but experts say there will not be enough for the 600 million people who will become eligible.

"It is tragic, the mismanagement. For a country known to be the pharmacy of the world, to have less than 1.5% of the population vaccinated is a failure difficult to fathom," Kaushik Basu, a professor at Cornell University and a former economic adviser to the Indian government, said on Twitter.