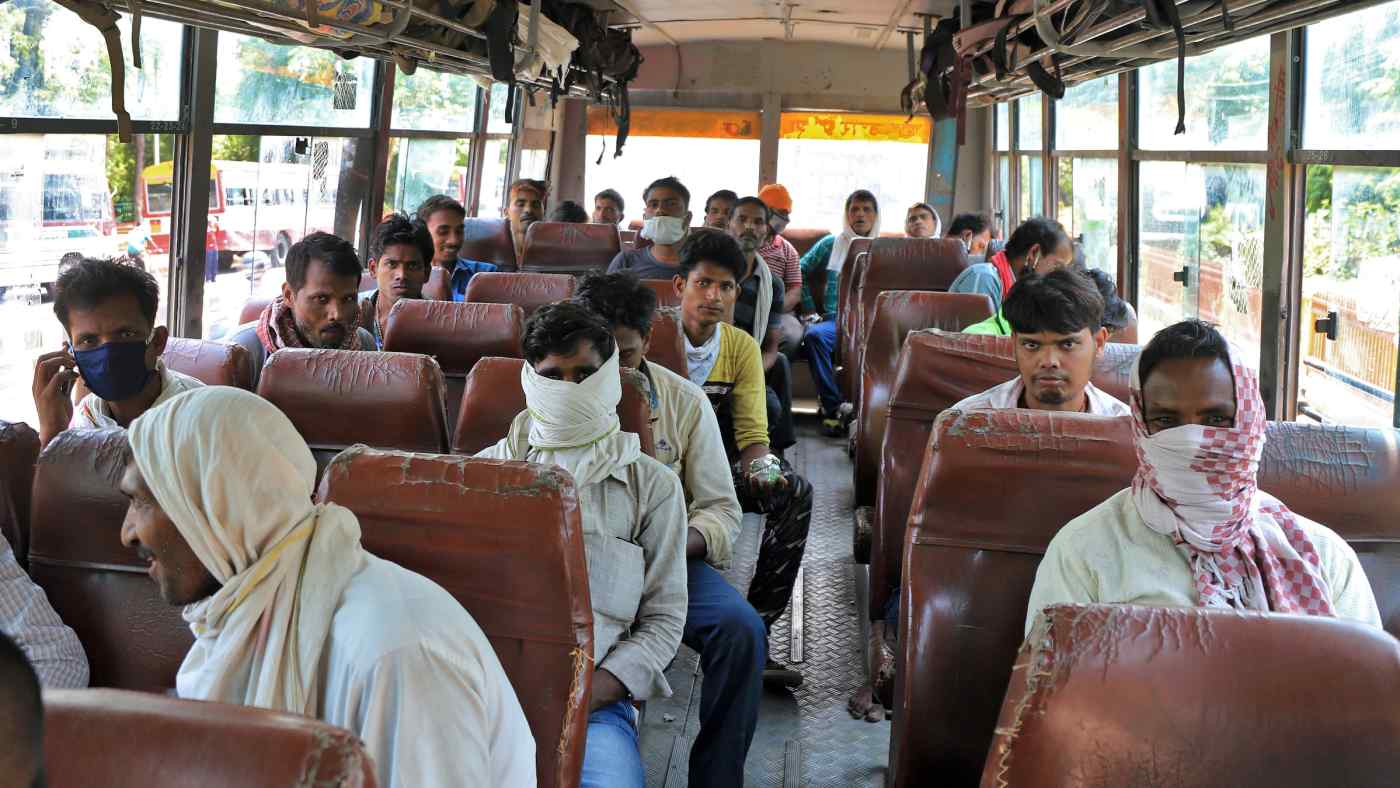 Migrant workers sit in a bus as they wait to leave for their home town, after being stranded in the central state of Madhya Pradesh due to the lockdown in India, on May 1.   © Reuters
KIRAN SHARMA, Nikkei staff writerMay 2, 2020 01:32 JST | India
CopyCopied

NEW DELHI -- India's lockdown of over 1 billion people was extended Friday by two weeks to fight the spread of the coronavirus that has led to more than 1,150 deaths across the country.

This is the second extension of the shutdown initially imposed for three weeks on March 25 and then extended until Sunday. Friday's extension will run until May 17.

While announcing the extension, the Ministry of Home Affairs also issued new guidelines to regulate activities during this period, with certain districts of the country given colors -- red, green and orange -- based on contagion risk. Red districts have clusters of positive cases, a green has zero infections while an orange area has a low number of cases.

"The guidelines have permitted considerable relaxations in the districts falling in the green and orange zones," the ministry order said.

Among industrial activities permitted are manufacturing of essentials such as drugs, pharmaceuticals, medical devices and raw material; and production of information technology hardware. All standalone shops and neighborhood stores are permitted to remain open in urban areas, while private offices can operate with up to 33% capacity.

In rural areas, all industrial and construction activities and food-processing units are permitted, along with agriculture activities such as sowing, harvesting, procurement and marketing operations in the farming supply chain. 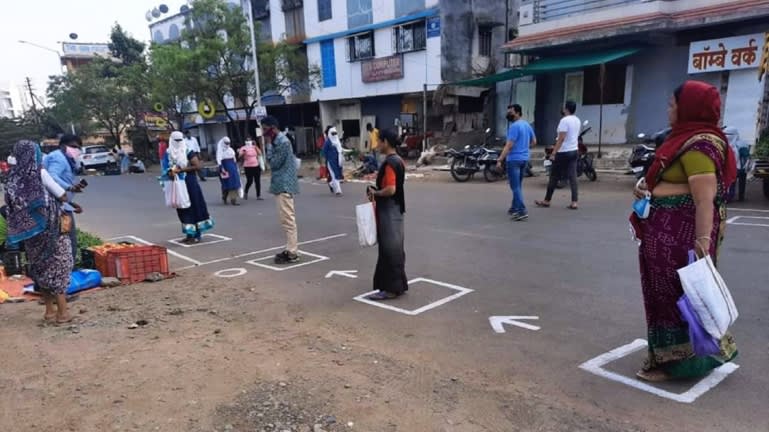 Residents of Mumbai practice social distancing as they line up to buy vegetables at a market on March 27, after the lockdown was introduced. (Photo by Mrudula Rane)

Health services, banks, and utilities such as power, water, sanitation, waste management, telecommunications and internet will remain open, and courier and postal services will be allowed to operate.

Sectors that will remain closed include travel by air, rail, subway and inter-state movement by road; schools, colleges, and other educational and training or coaching institutions; hospitality services, including hotels and restaurants; and cinema halls, malls, gymnasiums and sports complexes. Social, political, cultural and other kinds of gatherings will not be allowed, and religious places would remain shut.

"However, movement of persons by air, rail and road is allowed for select purposes, and for purposes as permitted by [the Ministry of Home Affairs]," the order said. "In all zones, persons above 65 years of age, persons with co-morbidities, pregnant women, and children below the age of 10 years, shall stay at home, except for meeting essential requirements and for health purposes."

When the first extension of the lockdown was announced, Prime Minister Narendra Modi had said there is a need to be "very vigilant" about hot spots or clusters with positive cases. "The creation of new hot spots will further challenge our hard work and penance," he said.

India's lockdown, which has asked its 1.3 billion people to stay at home, is the largest in the world, leaving tens of thousands of migrant laborers without work and unable to return to hometowns or villages hundreds of kilometers away from their workplaces in cities across the country. The southern Telangana state on Friday sent about 1,200 migrant workers back to their homes in eastern Jharkhand by a special train.

According to estimates by the Centre for Monitoring Indian Economy, a private think tank, the unemployment rate fell to 21% in the week ended April 26, compared with 26% in the previous week. Maruti Suzuki, the country's top-selling passenger carmaker majority owned by Japan's Suzuki Motor, on Friday reported zero sales in April in the domestic market due to the lockdown.