NEW DELHI -- With all eyes on its efforts to contain the COVID-19 pandemic, India -- the world's second worst-hit country with over 9.8 million cases -- is readying a huge vaccination drive, aiming to inoculate around 300 million people by August 2021.

Among groups being identified for the first shots are 10 million health care providers in the government and private sectors and 20 million other front line workers, such as police and armed forces.

Another 270 million people over the age of 50, along with anybody with associated co-morbidities, are next in line.

"Every single Indian who needs to be vaccinated will be vaccinated," health secretary Rajesh Bhushan said this week.

Of the nine vaccines currently in different stages of development in the country, six are undergoing clinical trials. These include Covishield from Oxford University and U.K. pharmaceutical AstraZeneca, for which the Serum Institute of India is a manufacturing partner, and Covaxin, India's first homegrown COVID-19 vaccine made by Hyderabad-based Bharat Biotech in collaboration with the state-run Indian Council of Medical Research. Trials for the Russian Sputnik V vaccine have also started in the country.

Most of the vaccines are two- to three-dose shots to be administered up to four weeks apart. "Some of them may get licensed in the next few weeks," Bhushan said, without giving an exact date. His remarks followed the efforts by Pfizer, the Serum Institute and Bharat to obtain approval for emergency use of their vaccines.

Health Minister Harsh Vardhan said separately that the COVID-19 vaccine may roll out in the first two to four months of next year. "By July or August, we plan to have vaccinated around 250 to 300 million people," he said.

The Oxford-AstraZeneca vaccine "fits Indian conditions the most," Ghanshyam Pangtey, a professor at the department of medicine at Lady Hardinge Medical College in New Delhi, told Nikkei Asia. "It's quite affordable and needs to be stored at [just] 2 C to 8 C," he said of the vaccine, whose two doses will cost a maximum of 1,000 rupees ($13.56). Pfizer, on the other hand, will be costlier at around 3,000 rupees for two doses and would need to be stored at temperatures of minus 70 C.

"The rollout in India will happen as soon as a vaccine is approved by authorities. I won't be surprised if the approval comes in one or two weeks," Pangtey said, pointing to the bookings already made by India for its vaccinations. According to the Launch and Scale Speedometer of Duke Global Health Innovation Center, India was leading other nations with 1.6 billion "confirmed doses" of vaccine for orders placed as of Nov. 30. 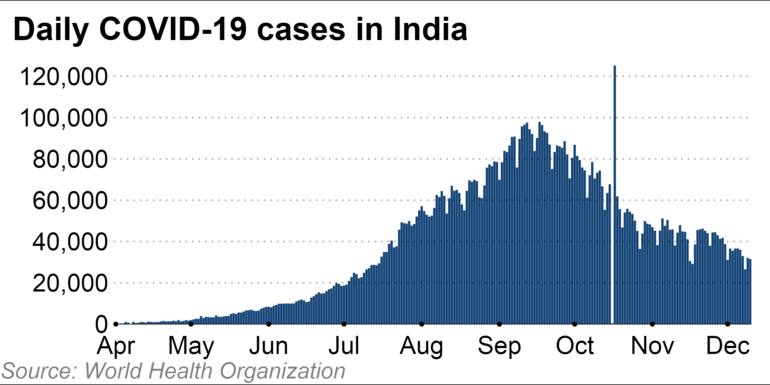 In terms of preparedness, the Indian government in April established a vaccine task force to provide guidance on research for a vaccine. This was followed by the national expert group on vaccine administration, which was set up in August to prioritize population groups for vaccination and give guidance on procurement, inventory management and delivery, among other tasks.

"Preparations for the rollout of a COVID-19 vaccine are being carried out by the central government in collaboration with the country's states and union territories," Bhushan said, adding that India is also working to bolster its cold storage infrastructure for handling vaccines.

"People will be able to register on this mobile app for vaccination," Bhushan said, while noting that there will be "no compromise with existing health care services, especially national programs and primary health care programs."

Prime Minister Narendra Modi recently said the world is looking toward India to provide a safe and affordable vaccine -- one that should be available in the coming weeks. "As soon as we get the green light from scientists, we will begin vaccination in India," he said.