SINGAPORE -- An Indian politician's suggestion on social media that his country should shut its borders to Singapore due to a supposedly new COVID-19 variant has drawn fire from both the city-state and his own central government.

On Tuesday, Delhi's Chief Minister Arvind Kejriwal wrote on Twitter that a "new form of corona that came to Singapore is being said to be extremely dangerous for children," adding that "in India it may come as a third wave."

Kejriwal went on to call for "air services with Singapore to be canceled with immediate effect," and for vaccination options for children to be worked out and given priority.

Singapore was not happy. "Politicians should stick to facts! There is no 'Singapore variant,'" the city-state's Foreign Affairs Minister Vivian Balakrishnan responded in a tweet of his own.

"MFA is disappointed that a prominent political figure had failed to ascertain the facts before making such claims," the statement said, adding that Singaporean representatives had met with the High Commissioner of India to voice their concerns.

"The strain prevalent in many of the COVID-19 cases in recent weeks is the B.1.617.2 variant, which was first detected in India," the statement concluded, referring to the recent increase in community transmissions in Singapore, which has prompted the authorities to tighten rules.

Tensions are running high as both sides, and many of their Asian neighbors, grapple with rising cases believed to be driven by mutations.

India's daily cases have fallen off their record peaks, but the country is still recording hundreds of thousands of new infections, overwhelming its health care system and killing thousands each day. The Delhi official's statement may sting a little more sharply after Singapore sent vital supplies, including oxygen concentrators and ventilator machines, to India -- one of scores of countries that extended aid.

India's External Affairs Minister S. Jaishankar weighed in on the issue, tweeting that Kejriwal did not speak for his country.

"Singapore and India have been solid partners in the fight against COVID-19," Jaishankar tweeted. "Appreciate Singapore's role as a logistics hub and oxygen supplier. Their gesture of deploying military aircraft to help us speaks of our exceptional relationship."

Rebuking Kejriwal, who leads the Aam Aadmi Party, Jaishankar said, "Irresponsible comments from those who should know better can damage long-standing partnerships." 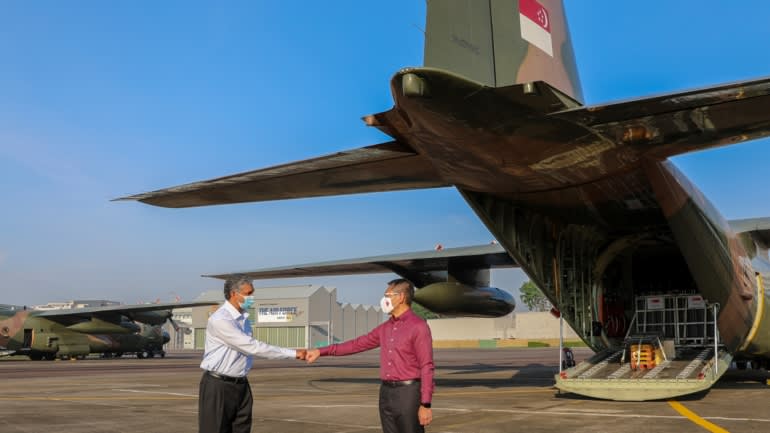 While Singapore has sharply tightened its border restrictions for arrivals from India in light of the latest wave there, it has long shown a reluctance to cut them off completely. The government has explained that the country relies on migrant workers in crucial sectors like construction and essential services -- many of whom hail from India and Bangladesh.

On Tuesday, Singapore's Manpower Ministry said that if the city-state had closed its borders from last year, it would have experienced a shortfall of about 130,000 migrant workers.

But Singapore is on guard against the risk of a wave stemming from the apparently more infectious strain first found in India. "Testing has shown this B.1.617.2 variant to be associated with several clusters in Singapore," the country's Health Ministry said in a statement on Tuesday.

Although its daily case numbers remain modest, Singapore has moved quickly to limit social interactions, banning dining at restaurants and allowing only two people to gather at a time. Infections traced to students attending public schools have prompted authorities to switch to online lessons.