India, the world's third worst-hit nation by the coronavirus pandemic, will celebrate its 74th Independence Day on Aug. 15 when Modi will address the nation. If the potential vaccine is ready by then, his opponents fear that the prime minister making such a significant announcement would win him popularity among voters. As of July 9, the country had 767,296 confirmed COVID-19 cases, while the death toll had jumped to 21,129.

The controversy over the vaccine deadline erupted following a July 2 letter that Balram Bhargava, head of the Indian Council of Medical Research, wrote to the institutes conducting human trials for Covaxin, the country's first indigenous COVID-19 vaccine being developed by pharmaceutical company Bharat Biotech in collaboration with the ICMR.

The letter said the target date for launching the vaccine for public use is envisaged as being no later than Aug, 15 "after completion of all clinical trials." It strictly advised trial sites to fast-track all approvals related to starting clinical trials, while warning that "noncompliance will be viewed very seriously."

Bharat Biotech, which is among several Indian companies engaged in COVID-19 vaccine development, late last month became the first company in the country to get regulatory approval for human trials, while Zydus Cadila was the second to receive such a nod this month. Besides India, countries such as China and the U.S. are actively working in the same direction. Experts voiced concern over what they see as the unreasonable mid-August timeline. The ICMR issued another statement two days later, saying the letter was meant only to cut unnecessary red tape and not bypass any necessary processes.

Yet skepticism remains, with the Indian Academy of Sciences describing the timeline as "unfeasible," saying it had raised "unrealistic hope and expectations" in the minds of citizens.

"While there is an unquestioned urgent need, vaccine development for use in humans requires scientifically executed clinical trials in a phased manner," the academy said in a July 5 statement. "While administrative approvals can be expedited, the scientific processes of experimentation and data collection have a natural time span that cannot be hastened without compromising standards of scientific rigor."

Rajinder K. Dhamija, a professor and head of the neurology department at Delhi's Lady Hardinge Medical College, stresses that the vaccine development process usually takes many years and, as has been seen in the past, by the time it is ready the disease or pandemic is already over.

"Normally, there is a preclinical phase, animal phase and [human trials] with hundreds of patients and then with thousands of patients," Dhamija said, opining that the vaccine cannot be developed before a year or a year-and-a-half, at least.

"More importantly, when the vaccine comes, it should be available to all people," he told the Nikkei Asian Review, adding the timeline should be set keeping in mind key points such as the vaccine should be mass produced for the world's seven billion people and should be safe and effective. Modi's political opponents, meanwhile, have raised other doubts. Prithviraj Chavan, one of the leaders of the main opposition Indian National Congress, questioned in a tweet why the ICMR was rushing for "an unrealistic timeline" of Aug. 15 for the Indian vaccine when global experts are giving a time frame of 12-18 months. "Is this to enable [the] PM to make a major announcement" on the day India became independent from British rule in 1947, he asked, demanding the Health Ministry clarify the situation.

Abhishek Kumar Sinha, a medical doctor overseeing COVID-19 sampling and contact tracing in the city of Sonepur in eastern India, told Nikkei that such a timeline is simply unreasonable. "It's the need of the hour to go for speedy development," he acknowledged. "But it can't be before 12-18 months [after human trials] for any vaccine to develop [even] if every stage goes on successfully."

Meanwhile, until a vaccine is developed many in India are pinning their hopes on plasma therapy -- under which virus-fighting antibodies taken from the blood of COVID-19 survivors are transfused into patients with active infections. Delhi, one of the cities most-affected by the outbreak, last week saw the inauguration of India's first plasma bank. 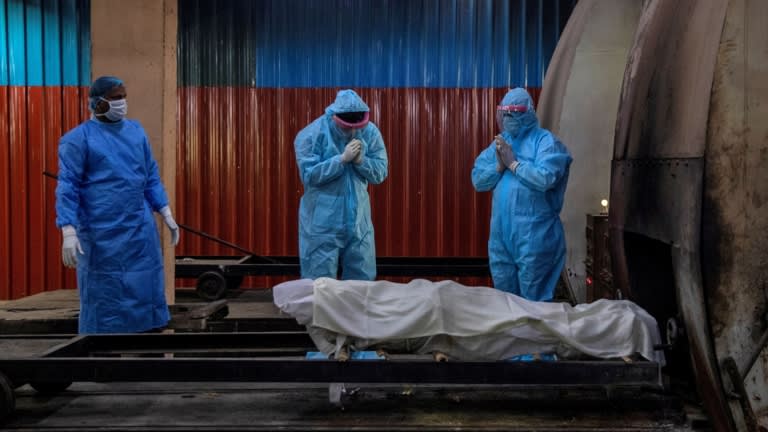 Relatives fold their hands in prayer before the cremation of a woman who died after infection with the coronavirus at a crematorium in New Delhi on July 8.   © Reuters

Nevertheless, experts say there is no hard evidence that plasma therapy in COVID-19 patients is as effective as, for example, the drug remdesivir, which failed as a remedy for Ebola but is seen as helpful in reducing the duration of illness in those infected with the coronavirus. Remdesivir is in high demand in India but supplies are short.

"Plasma therapy is only approved as an off-label or add-on therapy which can be given in addition to other drugs," Dhamija said, stressing it is no magic treatment. "Since there are few drugs [available for treatment] and it has been used previously in other infections with variable effectivity, people believe that it might be helpful in COVID-19 also."

Dhamija also observed that plasma therapy must be wielded early in the course of the disease. "Once the patient has already developed complications like multi-organ failure, then there won't be [any benefit]," he said. "So, I don't know whether [to call this therapy] a hype or hope."