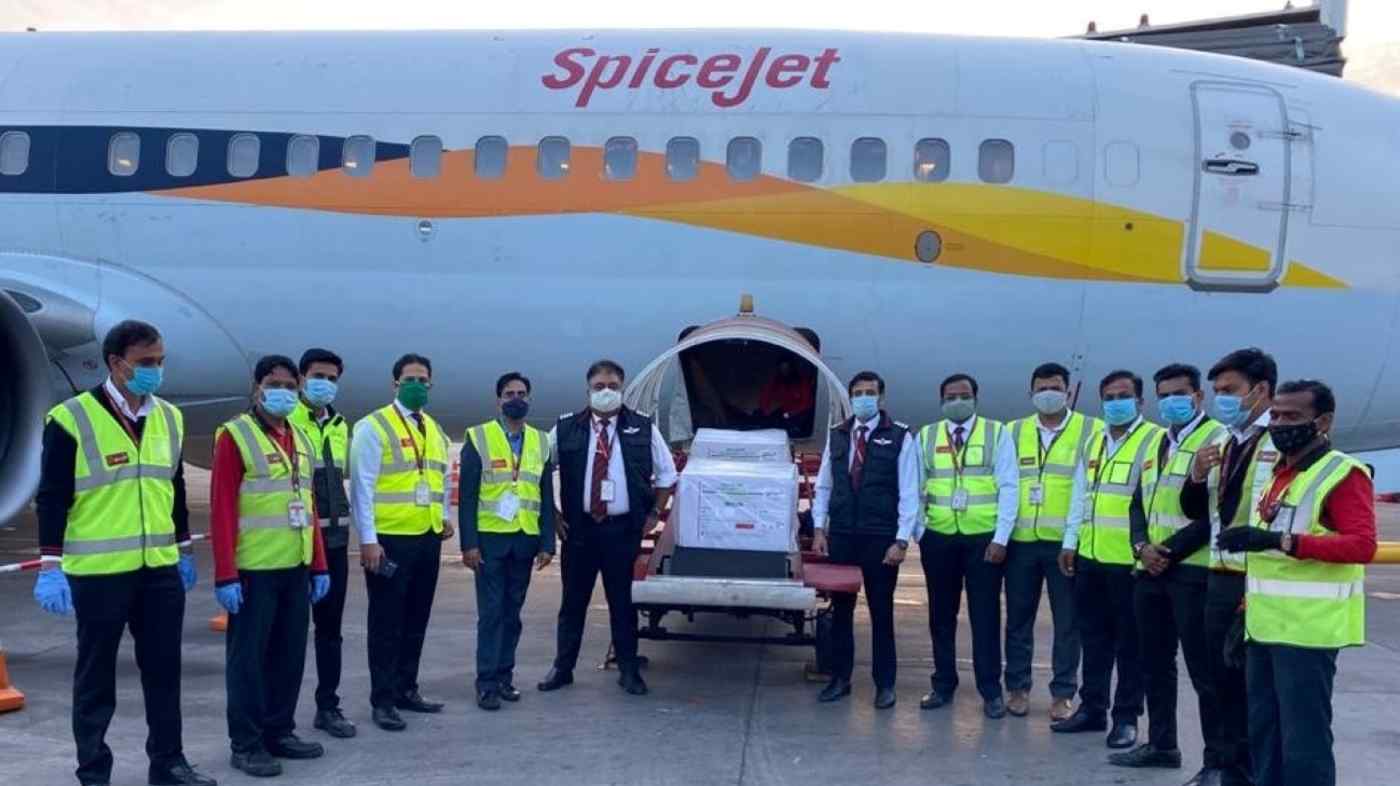 NEW DELHI -- As India prepares to launch what it calls the world's biggest vaccination drive on Saturday, its airlines on Tuesday began transporting Covishield around the country. The shot is one of two COVID-19 vaccines granted emergency approval by the country's drug regulator earlier this month.

Budget carrier SpiceJet said the first consignment of Covishield -- the local name of the Oxford-AstraZeneca vaccine manufactured by the Pune-based Serum Institute of India -- consisting of 34 boxes and weighing 1,088 kg was carried from the western Indian city to Delhi on a morning flight.

TV footage showed the Serum Institute dispatching vaccine vials from its facility in Pune to the airport in refrigerated trucks amid tight security early Tuesday morning. The Serum Institute is the world's largest vaccine manufacturer by number of doses produced and sold: more than 1.5 billion annually. It supplies around 170 countries.

Later in the day, the airline announced that it transported close to 4 million doses weighing around 11 tons on the first day of shipments. "Today is a historic day in our country's fight against the pandemic, and I am very proud that India's first consignment of COVID vaccine was carried today by SpiceJet from Pune to Delhi," Chairman and Managing Director Ajay Singh said in a statement.

"As India gets ready for the biggest vaccination drive in its history, the SpiceJet family hopes and prays for a quick, complete and decisive victory in this fight against coronavirus," he added.

The airline announced in a separate statement that it has signed a memorandum of understanding with Belgium's Brussels Airport aimed at ensuring smooth transport of COVID-19 vaccines, although it did not specify the name.

"This tie-up will help SpiceJet to seamlessly transport vaccines not only from Europe and beyond to India, but also help Indian manufacturers export extremely sensitive drugs in a safe and controlled environment," Singh said.

Apart from SpiceJet, state-run Air India and privately run low-cost carriers Indigo and GoAir operated nine flights from Pune on Tuesday, transporting a total of 5.65 million doses to 13 Indian cities, including Chandigarh in the north, the eastern city of Kolkata, Ahmedabad in the west, and Hyderabad in the south of the country, according to India's civil aviation minister, Hardeep Singh Puri.

During transport, the vaccine must be stored at a temperature of 2 C to 8 C. Airlines are working with vaccine makers, airports and ground transport companies to make sure the supply chain functions properly.

"[India's] civil aviation sector launches yet another momentous mission. Vaccine movement starts," Singh said in a tweet. The country's airlines are already busy flying home Indian nationals stranded abroad due to pandemic-related travel bans, and the Foreign Ministry last week said about 4.5 million people have been repatriated since the program started in May.

The other vaccine that received emergency authorization on Jan. 3 is Covaxin, the country's first indigenous COVID-19 shot. It was developed by Hyderabad-based drugmaker Bharat Biotech in collaboration with the state-run Indian Council of Medical Research.

Health Secretary Rajesh Bhushan said Tuesday evening that the government has signed an agreement with the Serum Institute to buy 11 million doses of Covishield at 200 rupees ($2.73) per dose, excluding taxes.

Separately, the government is procuring 5.5 million doses of Covaxin from Bharat Biotech, of which the company will donate 1.65 million doses free of charge as a "special gesture," with the remaining 3.85 million doses priced at 295 rupees each. Bhushan said all doses of the two vaccines will be distributed nationwide by Thursday.

Prime Minister Narendra Modi on Monday spoke online with local government leaders across the country, discussing a vaccine rollout under which 30 million health care professionals in the public and private sectors, and other front-line workers such as police and paramilitary personnel, are to be vaccinated first, followed by 270 million people over the age of 50, together with those having co-morbidities, by August.

Modi said the cost of inoculating the first 30 million front-line workers will be borne by the federal government alone. "Our country is entering a decisive phase in the battle against the coronavirus pandemic [and] we are beginning the world's biggest vaccination drive from Jan. 16," he said.

"It's a matter of pride for us that the two vaccines that have received emergency use authorization are made in India," Modi said, adding that the shots are "more cost-effective" than those being manufactured in other parts of the world. "We are aiming to vaccinate about 300 million people in the next few months."

India has the world's second-highest COVID-19 caseload, with about 10.48 million infections so far, just behind the U.S. The country has reported more than 151,000 coronavirus-related deaths.