A healthcare worker in protective gear takes a swab from a man for a rapid coronavirus antigen test at a kiosk in Ahmedabad, India on Oct. 5.   © Reuters
KIRAN SHARMA, Nikkei staff writerOctober 7, 2020 18:28 JST | India
CopyCopied

NEW DELHI -- India, the world's second worst-hit nation by the coronavirus pandemic, has been witnessing a steady decline in new infections in recent weeks, most recently with daily average cases between Sept. 30 and Oct. 6 declining to 77,113 from 83,232 the previous seven days.

Rajesh Bhushan, the country's health secretary, said at a news conference on Tuesday that 5.6 million in India had recovered from COVID-19, a figure he called "the highest in the world," adding the number of active patients remained below the million mark for two consecutive weeks.

Maharashtra, located in the western part of India and the country's richest state, accounted for 27.5% of total active cases on Tuesday, followed by the southern states of Karnataka at 12.57% and Kerala with 9.24%. The country, with over 1.3 billion people, consists of 28 states and eight union territories.

Bhushan said 48% of total COVID-19 deaths in India were concentrated in 25 districts in eight states. "The point to be seen here is [that] out of these 25 districts, 15 districts are in one state alone -- Maharashtra."

India's COVID-19 testing capacity, meanwhile, has reached 1.5 million per day, with more than 80 million tests conducted so far. Government hospitals at many places across the country have been carrying out the tests for free.

The average daily positivity rate, or the percentage of tests that return positive, dropped to 6.82% in the seven days to Tuesday against 9.21% from Sept. 16-22, according to figures from the Ministry of Health and Family Welfare.

Antigen tests can yield results in just 30 minutes, while the RT-PCR -- or reverse transcription polymerase chain reaction, considered the gold standard test to detect the virus -- may take up to eight hours to interpret the outcome. The government is emphasizing mandatory retesting of symptomatic people through the RT-PCR method if their rapid antigen test show negative results.

The Finance Ministry's economic review for the month of September, meanwhile, said India -- which enforced a strict nationwide lockdown on Mar. 25 to curb the spread of the virus -- may have turned a corner. "The pandemic however is far from over," it said. "Yet, the declining positivity rate at all-India level sets the stage to further push up the frontiers of economic recovery."

Dasgupta cautioned many countries have experienced infection surges after declines, noting the Indian state of Kerala is witnessing another wave. "These gains need to be sustained for a significant period to be confident that we're out of the woods." 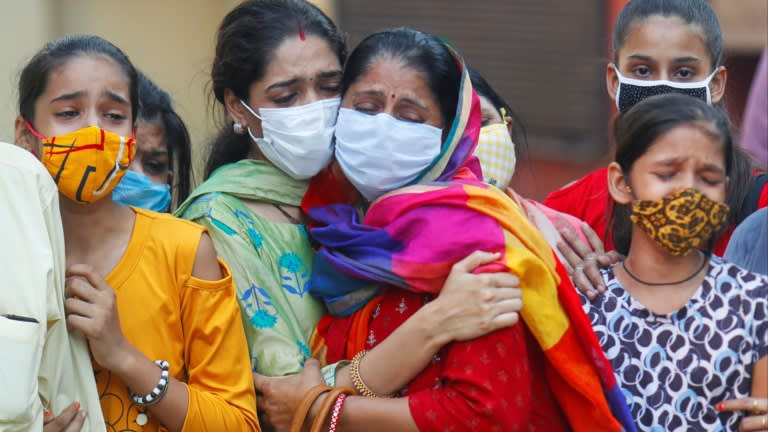 Relatives mourn the death of a man due from COVID-19 at a crematorium in New Delhi on Sept. 28.   © Reuters

Rajinder K. Dhamija, head of the neurology department at Delhi's Lady Hardinge Medical College, also urged caution, while welcoming the decline in the daily case growth rate. The problem is "people become complacent which leads to further spread of infections," Dhamija said. He urged Indians to be careful as an annual festival season begins later this month and in winter which could see a rise in COVID-19 cases along with colds and influenza.

Dasgupta also said infection surges will remain a constant feature for quite some time as all social activities other than education and the hospitality and entertainment sectors have resumed, with few real restrictions. remaining.

He pointed out that survey data reported on Oct. 4 indicated that only 44% of Indians are wearing masks even while awareness levels around face coverings are at a high of 90%.

Dhamija, meanwhile, said everyone needs to fight the pandemic, not just the government and doctors. "People's behavior needs to change, too," he said. With vaccine prospects uncertain, he stressed the efficacy of social distancing and masks." It is the need of the hour," he said.