Experts warn of another 'explosion' of infections as crowds hit streets NEW DELHI -- With India witnessing a significant drop in COVID-19 infections and authorities easing lockdown restrictions, people have started thronging markets and train stations. Many can be seen defying social distancing rules, triggering fears that the country could face another serious wave of the pandemic.

From a high of over 400,000 daily cases in early May, when a deadly second wave of the pandemic ravaged the country, new infections have fallen below 100,000 per day recently. On Thursday, India posted 67,208 new cases, bringing its total caseload to 29.7 million with 381,903 fatalities.

New Delhi, the capital, was among the worst-hit regions in the country during the April to May surge. There were severe shortages of oxygen, medicines and hospital beds. With case numbers dropping, the city has gradually begun relaxing lockdown restrictions, allowing shopping malls and markets to reopen, and letting Metro trains and restaurants operate at 50% capacity.

Soon after the curbs were eased, video footage appeared on social media showing huge crowds of shoppers in Delhi and long lines of people waiting outside of Metro stations.

"Delhi's top mall saw a footfall of 19,000 people... as soon as it reopened," Ambrish Mithal, a senior doctor at a Max Healthcare hospital in New Delhi, tweeted on Tuesday, without naming the shopping complex. "Have we gone totally mad? "Wait for COVID-19 to explode again -- and blame the [government], hospitals [and the] country." Arvinder Singh Soin, chairman of the Medanta Institute of Liver Transplantation and Regenerative Medicine, also took to Twitter to express his concern. "Delhi ought to have unlocked far more scientifically. We are inviting trouble!"

India's health ministry has advised people not to crowd markets and other places where movement restrictions have been lifted, to maintain social distancing and to wear face masks properly. "As we are opening up, our responsibility, our discipline become very, very important," V.K. Paul, the ministry's top adviser on COVID-19, told a media briefing.

Authorities in the capital, however, are already bracing for the possibility of another resurgence in cases, citing the example of the U.K., which is currently facing a potential third wave driven by the delta variant, which was first detected in India. 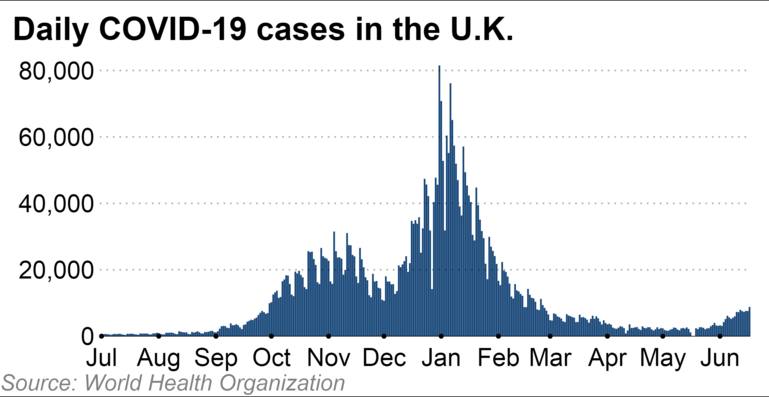 On Wednesday, Delhi Chief Minister Arvind Kejriwal unveiled an action plan to "save the city" if another devastating wave strikes. The plan includes augmenting oxygen supplies and training 5,000 youth as health assistants to help doctors and nurses so that there is sufficient medical staff to handle the situation. "These youth will be trained in first aid, patient care, administering vaccinations, et cetera," Kejriwal said.

Many other states, including western Gujarat and southern Kerala are working to strengthen their health care infrastructure and vaccination drives to minimize the impact of a likely third wave that experts believe could hit the country in the next few months.

"Many people on the streets can be seen not following social distancing and wearing masks on their chins instead of covering their mouth and nose," New Delhi-based health columnist Archana Jyoti pointed out. People visit a shopping Mall in New Delhi after COVID-19 restrictions are eased on June 14. As part of the reopening, all shops in malls were allowed to operate from 10 a.m. to 8 p.m.   © Getty Images

As of June 15, India, which launched its inoculation drive in mid-January, had administered the first dose of the mandatory two-shot vaccine to 211.4 million people, while 49.1 million had received both doses by then. Given that the country has about 940 million people over the age of 18 eligible for vaccination, it needs to step up the effort in a big way.

The country is using two locally made vaccines, Covishield, supplied elsewhere under the AstraZeneca label and manufactured by the Serum Institute of India, and Covaxin, developed by Indian drugmaker Bharat Biotech. Russia's Sputnik V vaccine has also been approved for emergency use.

"The pace of vaccination should see renewed energy from next week onward," Paul, the health ministry's adviser, said. "We look forward to [this] new phase in vaccine implementation [and] vaccine scaling up."