Although 80% of adults have received one dose, supply of boosters in doubt Residents of Bhutan's capital, Thimphu, fear the possibility of a lockdown as cases continue to rise on the southern border of the kingdom. (Photo by Phuntsho Wangdi)
NIDUP GYELTSHEN and PHUNTSHO WANGDI, Contributing writersMay 21, 2021 14:34 JST | Bhutan
CopyCopied

THIMPHU -- If all goes as planned, the tiny Himalayan kingdom of Bhutan will fully vaccinate its entire adult population against COVID-19 by the end of June, making it one of the first countries to do so.

But the devastating second wave of coronavirus infections raging through India has cast doubt on whether enough vaccines will be available to achieve this milestone, with India itself facing a dire shortage.

The government remains hopeful. At a news conference earlier this month, Bhutanese Foreign Minister Tandi Dorji said the Indian government had assured Bhutan that it would provide the half million AstraZeneca vaccines, known as Covishield in India, required for the second booster dose to achieve full immunization.

In April, helicopters delivered vaccines across the country and healthcare workers and volunteers trekked for several days through snow to reach remote villages to administer the first doses of the Covishield vaccine. This covered more than 80% of the eligible adult population in a campaign that went on for three weeks. India, which has close ties to Bhutan, gave the country the vaccines in two batches.

The landlocked nation of about 760,000 people, bordered by China to the north and India to the south, received the first batch of 150,000 doses on Jan. 21, while the second lot of 400,000 doses arrived on March 22. Five days later, the campaign kicked off. A 30-year-old woman was the first to receive the jab, which was deemed auspicious by Buddhist astrologers as she was born in  the Year of the Monkey. 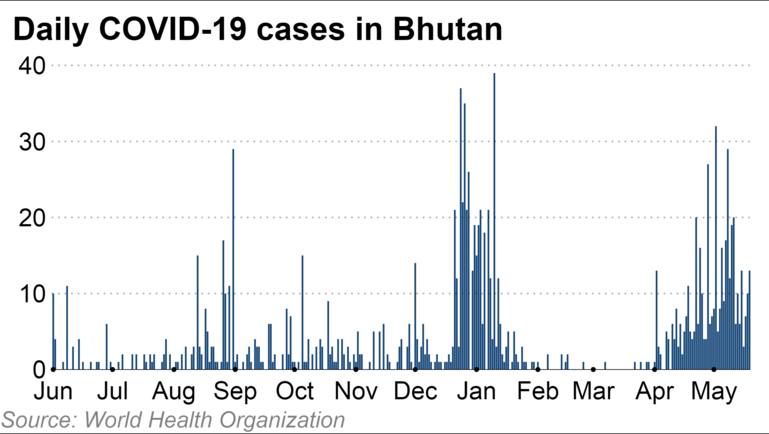 Buoyed by the success of the campaign, the government hinted at relaxing stringent quarantine and travel restrictions, and slowly opening the country's borders after the second round of vaccinations in June.

But new doubts about vaccine supplies have raised questions about the effect of a delay for the second dose beyond the recommended 12-week window, even as the kingdom tightens monitoring and testing along the southern border and braces for possible new infections originating in India.

"The good news is that even with one dose there is at least some protection," said Tandi Dorji who is also a member of the National COVID-19 Task Force.

Bhutan is exploring the COVAX facility, a worldwide initiative aimed at providing equitable access to COVID-19 vaccines, which has allocated 108,000 doses of the AstraZeneca vaccine and 5,850 of the Pfizer vaccine to cover 20% of the kingdom's population. Thimphu is also reaching out to the European Union, the U.S. and others that produce the AstraZeneca vaccine.

And it is considering other vaccines. "Being a doctor myself and knowing how our body reacts, any vaccine that has a proven track record and has been approved for emergency use would be good," Prime Minister Lotay Tshering said on May 11 in an interview.

The World Health Organization's representative in Bhutan, Rui Paulo de Jesus, said WHO recommendations on the eight- to 12-week window for the booster shot remain unchanged for the moment. However, he also said the WHO does not recommend administering a different vaccine for the second dose because no studies has been done on the effect of mixing vaccines. Thimphu residents await the results of rapid antigen tests at a makeshift flu clinic in the capital. People with flu like symptoms are encouraged to get tested for COVID-19. (Photo by Phuntsho Wangdi)

Sonam Wangchuk, a public health expert who heads the Department of Public Health's Royal Centre for Disease Control, believes opting for a different vaccine for the second booster dose will increase efficacy. The only concern is that side effects might mount.

"As of now, there is no scientific evidence that the second dose can be another vaccine, but I am sure it will come out soon," said the microbiologist, who is also a member of the National Immunization Technical Advisory Group.

The public health expert also said new evidence shows that even if the eight- to 12-week window is missed, the first dose will still be effective. Other countries, such as India, have extended the window to 16 weeks, he said.

Of still greater concern is the potential for the more contagious Indian variant to move across the border. It has already spread to Nepal and Bangladesh, partly through migrant workers returning home. Cases and fatalities are spiking in those countries.

Since early April, Bhutan's southern border areas have recorded cases almost every day. As of May 18, more than 400 cases were recorded, a significant number for Bhutan, which had fewer than 900 cases as of March and has recorded only one death so far. Most originated abroad, but some were community transmissions. This has led to lockdowns in several towns along the southern border.

"Community transmission is happening, but Bhutan is able to identify cases at an early stage and immediately isolate and treat," said Rui Paulo de Jesus of the WHO. "That tells us the system that has been established is working well." The border town of Phuentsholing, the country’s main entry point from India, has been under lockdown since mid April, after a 10-year-old child tested positive for the virus. (Photo by Ugyen Thinley Wangdi)

While samples have yet to be sent outside the country for confirmation, public health experts believe the recent surge in cases is due to the Indian variant, which has been detected as far away as Europe and Indonesia.

With COVID infections from outside the country viewed as one of the biggest threats, Bhutan sealed its border with India in March last year, allowing movement only for essentials. Hundreds of volunteers and security personnel were deployed to man the porous 699 km border, which has numerous formal and informal entry and exit points. It also enforced a mandatory 21-day quarantine for anyone entering the country. That brought Bhutan's vital tourism industry to a standstill.

Bhutan has also barred Indian specialists for the hydropower and construction sectors from entering the country as a further precaution. This will add to delays for a number of projects. "We wanted to bring 1,500 workers by June for the ongoing 1,200 MW Punatshangchu II hydropower project, but we managed only 58," said Loknath Sharma, Bhutan's economic affairs minister. "We hoped to complete the project by June 2022, but that's not going to happen now."

Hydropower is a key driver of Bhutan's economy, contributing almost 14% to its gross domestic product, mainly through electricity exports to India. Last year generation rose by a third, thanks to favorable hydrology and the commissioning of the 720 MW Mangdechhu plant. Bhutan exported more than 27 billion ngultrum ($370 million) of electricity to India, helping to cushion the blow from the pandemic.

Loknath Sharma said Bhutan needed specialists not just for the hydropower sector but for the entire construction industry. If the current situation drags on, it will devastate the economy. According to government data, the economy is estimated to have shrunk by 6% last year.

Bhutan is heavily dependent on foreign workers and an estimated 60,000 were engaged in various projects before the pandemic. Most returned to India last year.

For now, the focus is on preventing any spillover from India. "Only when we see the tragic scenes unfolding in India on TV do we realize how lucky we are to be in Bhutan," said Tshering Peldoen, 34, who works at a local financial institution.